“3 Days to Kill” interview: Amber Heard likes being a bad-ass?! 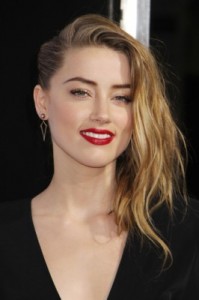 Beautiful Amber Heard won the heart of star Johnny Depp in real life, but in 3 Days to Kill, she gets Kevin Costner’s Ethan to do everything she wants. As Vivi, who works at the CIA as Ethan’s boss, she’s well-dressed and sexy but drives sports cars at high speed and holds guns all the while never hesitating to kill people when she thinks it necessary. Such a cool bad-ass character! Amber told us she enjoyed being so bad-ass! 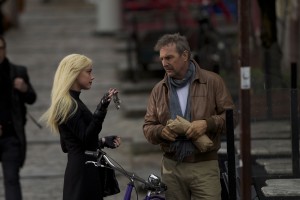 “What I was attracted to about her is this idea that I could kind of play with the suspension of reality that Vivi doesn’t live in the same world that we live in. She doesn’t even live in the same world that the rest of the characters live in. And it’s the heightened sense of reality and the freedom that comes with that which drew me to her. And I also like that she could be seductive, but that’s not where her power is. Her power is skill and knowledge, and her ability to do a job well and be unaffected by it on the emotional level. There are many things about her that make her who she is in the movie. Being seductive is just another side effect of all the other stuff. I’d rather shoot the gun than wear a wedding dress. It’s far more interesting to me.”

Vivi is very demanding, with zero hesitation to give orders to Ethan who is much older than her and has more experience. It is a very unique relationship. How does she see the power in relationships between men and women? 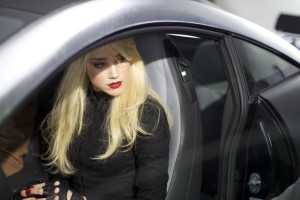 “For my part in it, our relationship is an interesting one. And the power struggle of these two strong characters constantly going against each other was interesting. He’s very accomplished. He’s very good at his job. He’s tried and true. He’s a veteran of the trade that they’re in. She’s a whole other school. It’s a new school. It’s completely opposite people in some ways and we’re the adversaries, which is what I liked. It’s rare that you see that dynamic between a man and a woman in a film. And I liked that that didn’t bother or hinder McG’s imagination or his desire to see that come to fruition. It’s like he didn’t care. It’s like, ‘Yeah, why couldn’t I be his boss? Just because I wear high heels?’ But you don’t see that often, which is why I liked it.”