Add 1 more day for “ONE DIRECTION: WHERE WE ARE – THE CONCERT FILM” 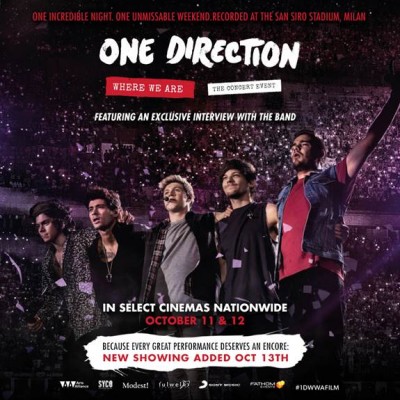 It was supposed to be only October 11th and 12th when you could see One Direction on the silver screen with One Direction: Where We Are – The Concert Film.

BUT! They added one more day for fans to enjoy singing along at the theater.

Now they will also show this film on Monday, October 13th, Columbus Day.

This film features the live concert including all of their biggest hits and 15 minutes of never-before-seen interviews with exclusive behind-the-scenes footage! If you want to see Niall Horan, Zayn Malik, Liam Payne, Harry Styles and Louis Tomlinson on the big screen, this is the chance! Don’t miss it!

Here are theater and showtime list in LA area.

Burbank 16 with IMAX and ETX