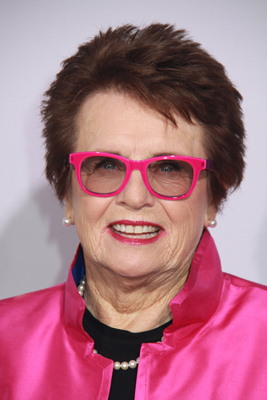 Forty-four years ago, 29 year old tennis star,  Billie Jean King took center court when at the height of her career, she fought gender discrimination and took on retired tennis champion, Bobby Riggs in a televised match played at the Houston Astrodome. The match was penned as Battle of the Sexes and to date is still one of the most infamous matches in sports history. Although Riggs took an early lead, King came out on top and won the match, the $100,000 prize, and respect from tennis players worldwide. Now, King’s incredible story has hit the silver screen with Emma Stone staring as the legendary tennis star.

We chat with King on her experience, the new movie, and why there is still a gender gap with salaries and competition. 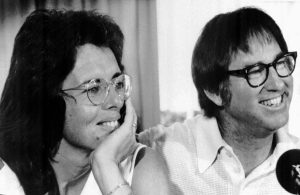 Q: Tell us about your ex-husband, Larry King’s support for women’s rights.

Larry and I always talked about changing the tennis world from the ‘60’s. It was at the Cal State L.A. library where we first started talking about how we wanted to change tennis so he and I were very much in it together, which really did show how he stayed connected and there is a scene there where we are forming the WTA (Women’s Tennis Association) and Larry has these papers sitting on the desk, which is in the movie. That was very important to me because those were the bylaws. He was a lawyer so he was able to get the bylaws ready before we had that meeting so we could elect the officers and actually have an association and have it ready to go. You can get together and say “Oh yeah. We’re going to do something,” and then we have to get everybody back together again to elect the officers and write up bylaws. Larry did that all before we had that happening and that made a huge difference so we were very much in it together. 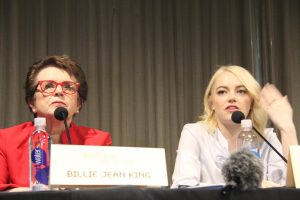 Q: What was it like to watch Sloane Stephens win the U.S. Open singles then get presented a check for $3.7 million on the court after she won?

She’s also a woman of color. That’s one of the things we were trying to do as well. If you notice in  Battle of the Sexes how white everything is. I think we had two people of color in the audience. Thank God Rosie (Casals, played by Natalie Morales) was the announcer or else we would have been in big trouble but we had Jim Brown, the NFL football player and we also had George Foreman, the great boxer, and George bet on me. Of course I knew Jim would bet on Bobby. So, George Foreman ended up being a security guard because we had no security guards in those days in the end.

Q: 21st Century Fox is donating 79 cents of every ticket sold during the opening weekend to the Women’s Sports Foundation. How meaningful is that to you?

Very meaningful. I want to thank 21st Century Fox for doing that. Working for Fox Searchlight has been an absolute joy. Even in the movie, they use the old (Fox) logo, the ’73 logo, which is totally cool. And I think (co-directors) Jonathan (Dayton) and Valerie (Faris) did a fantastic job in the way they filmed it. I think women should only work 79 percent of the year. We have to work until April to receive equal pay with the guys. So, something has to stop, and something has to start.

Q: There’s been a lot of discussion in Hollywood regarding A-list actresses not making as much as their male counterparts in films. In your opinion, what do actresses have to do to change that and receive equal pay? Should they form a union like the WTA (Women’s Tennis Association)?

I have to understand it totally—how they do box office etcetera. Once I understand it I might have an idea. I think they will have an idea. You never know how you will touch another person’s life and how they’ll touch yours as you go through life and it’s important to pay attention. This is one of those moments. I know I’ve been thinking quite a bit about it but I don’t know it well enough. They (actresses) understand it. They live it, the men and the woman, so I’d like to listen to them first and then it might be interesting to pursue. I don’t know.

You don’t want to disrupt anything. You want to just make things better for everyone so it’s a tightrope. We’re always on a tightrope because we’re always trying to get everybody’s hearts and minds to match up because once you alienate, they go away. (Working for equality) is a very, very difficult thing and you always try to do everything you can behind the scenes first and don’t go to the media unless it’s an absolute last resort because it’s not fun. It’s just not fun. You just want to do the right thing.

Q: I understand you have been friends with Elton John for years and some of his music is on the Battle of the Sexes soundtrack. How did you two originally meet ?

I met Elton two weeks before I played Bobby Riggs in Los Angeles at a party given by (billionaire/philanthropist) Jerry Perenchio. I met him, and we hit it off. We were very shy and he kept looking across the room and finally his manager came over and said, “He wants to meet you but he’s too shy,” and I said “Ditto,” and he said, “Come with me,” and so we met each other and we were off and running, and then in ’74 he came to watch me play team tennis for the Philadelphia Freedoms (tennis team). We were in the car going to a concert and he said, “I want to write a song for you,” and I go “What?” So, he said, “What are we gonna call it?” I go “I don’t know.” He says, “You want to call it ‘Philadelphia Freedom?’” I said, “OK,” and it became a number one (hit) and crossed over to R&B (charts), which made him so happy. His “Rocket Man,” which is in the film, is my brother’s favorite so it made me happy. I thought that it fit the scene so beautifully with the car going down PCH or wherever we were supposed to be going. 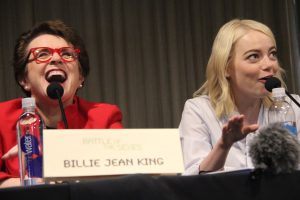 Q: The LGBTQ community has found an incredible sports role model in you and subsequently in tennis pro Martina Navratilova. Why does it seem so hard for men in sports to come out whereas for woman who come out it seems like an easier process?

It wasn’t (back then). [chuckles] I can tell you, just in general, whenever we were playing, the women were always asked about their sexuality, but the men never were. Right there, it’s more secretive. We don’t have to keep facing the barrage of questions. And it’s the last bastion of machismo. It just scares the death out of the guys because of how they’re going to be treated by their fellow players. That’s really important because, like with actors, that’s our family. When you see them together, they’re connected by their profession so just being your authentic self is really difficult when it’s so shame-based, and it still is. The LGBTQ community suffers a lot because especially because trans (sexual) kids have 40 percent more suicides than any other group. That’s why it’s important to embrace everyone because you want everyone to be their unique self. It’s so important.

Battle of the Sexes is playing in theaters nationwide. For more info, visit the film’s official website at