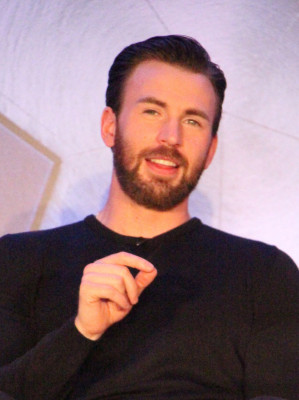 Captain America has been considered America’s number one good guy who fought selflessly and without hesitation to protect the people. However, in Captain America: Civil War we see a different side of Cap. Playing Cap years, Chris Evans talked about being Cap and the mind change his character.

Q: In the past, Captain America has always been known to follow the rules and obey authority. However, in Captain America: Civil War, something has changed and the Captain is now rejecting the American government control and the possibility they will be under the supervision of the U.N. ( United Nations) control. What do you think changed for him?

He’s always kind of fought for the greater good. He’s always kind of put the needs of the masses before his own desire. And that’s exactly what’s different in this film. Instead of kind of dedicating himself towards what others need, in this film he kind of prioritizes what he wants, which is a departure from what he’s normally allegiant to. It colors the character in a really nice way. You have a guy who’s this incredibly austere and moral character. It’s hard to find ways to kind of make him layered and dynamic, and I think in this movie he becomes potentially selfish where he kind of puts his own desires first but it’s rooted in family, which I think is a through line we can all relate to 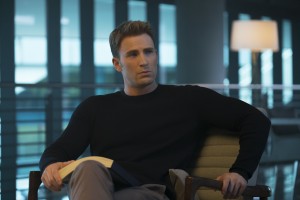 Q:What is something about your character that we don’t know?

I think to some degree, I mean this is almost like the way it is with being an actor in general. Some things, certain things you want to share and certain things you don’t. To some degree, it’s almost nice having certain parts of the character that are intimate. And ultimately, at the end of the day, these guys do a good job of flushing out the tones that they want you to see better than we ever could. That’s one of the things when I was just doing the interview with you guys, you two and  Kevin (Feige, producer) and the Russos (directors, Anthony Russo, Joe Russo). They were just talking about how they formed these stories and formed these arcs, and you really think these things. I am kind of deviating from the question but it just feels worthy to bring up. Because it blew my mind, I’ve been doing this for a long time now and we were having an interview and they were talking about how they were going to a meeting. And sometimes you think with these movies, these giant Marvel movies. Any big movie where you think there’s a thousand cooks in the kitchen, you assume there’s some sort of formula. Some algorithm that kicks in and there’s 30 people in suits being like, “This is what it needs to be.” But the truth is, it really is Joe and Anthony and Kevin and Nate (Moore. Producer) in a room mapping out stories for so many characters. So many arcs, and they are making them real. They are making them actual fleshed out arcs and conflicts that are worthy of a film. All the explosions in the world aren’t going to make you care. And it’s nuts to think that it really comes from a few people’s brains, and again, this is not exactly the answer to the question but I think it was worth bringing up because it blew my mind. Because I’ve been doing this for a while and it was nuts to kind of realize it really does start from just a few people. The end [laughs] 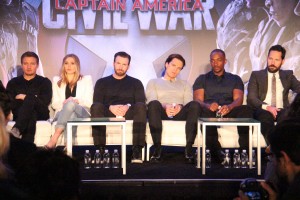 Q: After this film, it seems like everybody could carry their own solo film. How do you deal with keep the fans coming back while not diluting the content with too many splintered off sub stories and still keep the cast invested?

I’ve been really talking a lot about this to the press. But it really is over the course of the, you know, I’ve been doing this for a while now and it really is nice to kind of step back. In the first couple years of your involvement of the franchise, you’re very internal. You’re very scared about being the thing that’s going to cause it, you’re going to be awful and you’re very terrified in a very “egoic” manner. But as you kind of continue on the journey, you kind of realize how amazing it is what they are doing. And what they are accomplishing and how fortunate you are to be a part of this unbelievable interwebbing of stories. And you kind of are just so fortunate to be a part of it and I say keep going. Let’s keep going. Let the wave get bigger and bigger. Because it’s not stopping. It’s not like they’re making bad movies. They’re making great movies. And if you want to keep putting in this superhero box, you can. But the fact is it’s still good movies. It’s good movies. Especially the Russos, they ground them in such an authentic way. It’s real humans, it’s real struggles, real conflict.  Good cinematic story telling with like a streak of superhero flavor in it. So I say keep going. You can keep doing it. Keep doing it.