Charlize Theron who plays a super bad ass girl had a pussy day during the filming of “Mad Max: Fury Road” 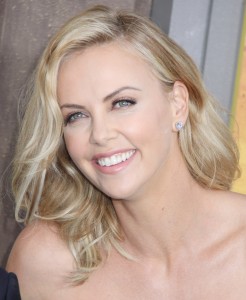 Beautiful and very talented actress Charlize Theron transformed into an action star in Mad Max: Fury Road. She shaved her head and did action stunts. Her character Furiosa would be a very special role for any young actress, reminiscent of Ripley in the Alien series and Sarah Connor in the Terminator series — strong yet with layers and complicated. How lucky that Charlize got the role! And she knows that. She also talks about the story behind shaving her head and more! 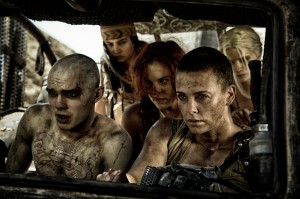 Q: This film is an unexpectedly female-driven story. And we have more roles coming out for women in bigger films. Are you seeing this in your own career?

Yes and no. I think it is a complicated question to answer. I think it was not so much the quantity, we just want good quality. There are women in these types of movies all the time. There were whispers about this new female character that would stand right next to Max. You think it’s awesome, and then you remember that you’ve heard that before. And I thought maybe I’d just be the chick in the background with the push-up bra and the hair in my mouth. So the cynic in me had doubts. But I’ve been doing this for a while. I met George, and there was something about him that I believed him that he wanted to do something that felt really truthful. It’s in the quality of this role as opposed to just being a girl in this movie. Women are eager to feel that we’re on an equal playing field. I don’t want to be anything other than what I really am, just an authentic woman. In a lot of movies, you’re either a really good hooker or a really good mom. And that conflicted nature is missed in film and just not celebrated enough in society. So when you come across that rare filmmaker that really wants to embrace that, it’s really nice. There should be more of that. It’s really strange to me when these women come on screen, and they are always embraced very positively, and we should keep exploring that. 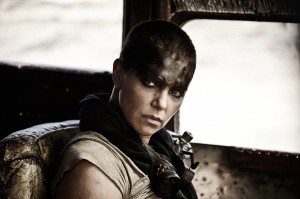 Q: Did you have to be dragged to the chair to get your head shaved? What was that experience like?

I didn’t get dragged to it. The movie stopped and started several times. The more time we had, the more the story informed both of us. As an actor, you’re just trying to fit into the world, and I didn’t know how to fit into this world. There was something nice about the element of surprise. We weren’t trying to hide her as a woman, but she really melted into this underworld mechanics place where she was almost forgotten as a woman, and there was something nice about the element of surprise. Like, what? She made a left? I wanted something that could kind of disappear. And I didn’t know how to do that with a ponytail. My hair was really fried, and I wasn’t really convinced, so I asked George if he thought I should shave my head. He was really quiet, and took a deep breath, and I took that as a positive. And I found out yesterday that he was very concerned about the shape of my head. I didn’t have buzzers, so my friend Enzo brought them, and 45 minutes later, it was off, and we sent a selfie to George, and he was awesome. 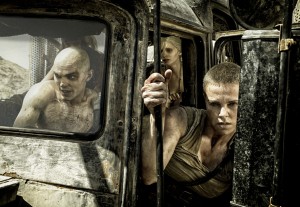 Q: What was the most daunting stunt that you had to do yourself?

I had a rough time with the scene where Max (Tom Hardy’s character) falls off the hood of the car, and Riley’s (Keough) character and I have to grab hold of him. It was on my mechanical arm, so I couldn’t use my own body strength to hold Tom up. So I was leaning out of the window, and thought, “This could be really bad.” Of course I was concerned with Tom’s head hitting the ground, but I’d be going with him. I’m hooked to him. I was definitely a bit of a pussy that day for sure.

Mad Max: Fury Road opens in theaters on May 15th.