Congrats on the Oscar nomination! “Still Alice” star Julianne Moore found out from Chloe Grace Moretz’s mom that “women in their 60’s have a 1 in 6 chance of developing Alzheimer’s” 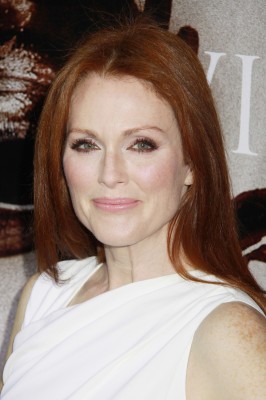 Alice had the perfect life — a successful career, a lovely husband and three healthy kids. It sounds like the same as what Julianne Moore has. What is the secret to achieving that kind of life? What did Julianne learn through this project about Alzheimer’s? What does Julianne think about Alice’s choice? I got all the answers! 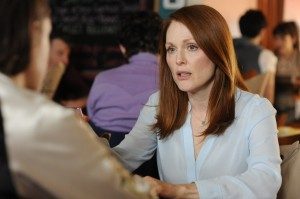 Q: Your character, Alice, has a successful career, a loving husband and children. It feels like she has the perfect life and this is very similar to your life. What’s the secret?

Sometimes we have this discussion about work, family, work, family and it sounds like a facile discussion often when we talk about it. How do you balance it all? How do you have the time for this and that? Well, at the end of the day, isn’t that all there is? That’s what we have. We have the work that we want to do and that’s the way we express ourselves. Then we have the people in our lives that we love. 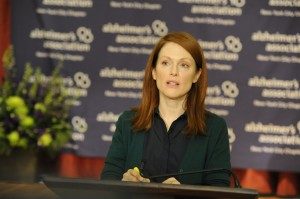 Q: How were you able to portray this woman as nobody knows what it is to be sick with this disease?

I spoke to the head of the Alzheimer’s Association. I spoke to these different women on Skype who have been recently diagnosed, all in their 40’s, a couple in their 50’s. I went to Mount Sinai and talked to clinicians and researchers. I did the cognitive test that they give. I went to the New York Alzheimer’s Association and talked to the woman there. I went to a long-term care facility. So I tried to meet everybody at every stage of the disease. Everyone was so generous with their time and their information but I would always say to them, “Can you tell me what it feels like?” They would try to explain it. That speech that I give to Lydia when she asks what it’s like, all of that information was taken from what I have heard from people. They said it’s not always the same, you have a good day and a bad day. Then that idea of seeing something, like a word hanging in front of them, then looking for it and reaching for it and it not being there. Knowing that it’s there, but not being able to get there. The idea of not even knowing who you are. You think, “If I have to find myself one way and my intellect is no longer the same thing, then what am I?” We really think about what’s on the inside of ourselves and I think that’s why Alzheimer’s is so terrifying to people. They think, “Who am I if that’s gone?” I don’t know, but I got as close as I could. That’s what we all try to do. We all try to represent it as much as possible. 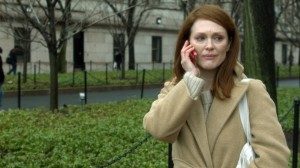 Q: Have you stayed in touch with the people you met?

There was one woman I really hit it off with. She was the youngest person I met. She was diagnosed at 45. She has red hair. When I first saw her on Skype, I was like, “Look at you! You look like me. Hi!” because all redheads think they look alike. She was really nice and really bright. She had been a nurse who ran a neurosurgery OR. She was diagnosed at 45 and she was 49 when I spoke to her.  She spent her 50th birthday on our set. What was interesting, I thought, is that I introduced her to everybody. I said, “This is my friend, Sandy. She’s been my adviser on this. She really helped me a lot.” And no one knew she had Alzheimer’s. That was very interesting. Sandy works very hard and doesn’t present like she has Alzheimer’s disease. So that’s something I saw with the women I was speaking to. Also, rather than somebody disappearing, everyone is trying very hard to stay in their life, and stay who they are and do everything they can to hold on to the life they want to have. 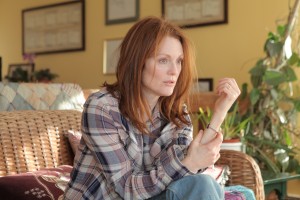 Q: Being 50, is this something that concerns you in terms of yourself or people you know in that age group?

Terry Moretz, Chloe’s mom, just sent me an article that was in Time magazine that said women in their 60’s have a 1 in 6 chance of developing Alzheimer’s disease, the same as their chance of developing breast cancer. So it’s a disease that’s rapidly gaining ground, I guess. The other terrifying thing about it is that once you are diagnosed with it, there is very little you can do to alter the prognosis, or even alter the progression of the disease. So we don’t know anything. We know there are correlations between brain health and heart health. There are some genetic markers. Later onset has to do with age. Thirty or forty years ago no one knew what to do about cancer. With enough money and time and research, there is so much more that they can do now. I feel like people in the Alzheimer’s community really feel that they are a stone’s throw away from something meaningful. 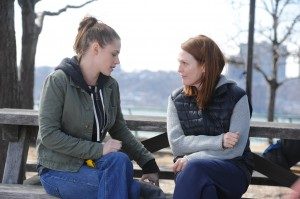 Q: Did you discover anything else about Alzheimer’s throughout the research process?

The isolation. That was something that a lot of the people spoke to, talked about, and it broke my heart too. Often when they were diagnosed, people who were early onset were working. They hadn’t retired so they were usually forced into early retirement, and that’s kind of where we get a lot of our socialization actually. So here was this one woman I spoke to in the Midwest and she was like, “Well, I try to find things to do to fill my days. My friends are busy and I’m here by myself and I can’t drive my car anymore and I can’t even go to the mall.” And they talked about the excruciating loneliness that they experienced. That’s the gift that Alice gets from Lydia is that she’s not isolated. She has someone there. In a way I think that’s why we’re all so touched by it; that this woman who could have been abandoned is not. She does have a lot of love. 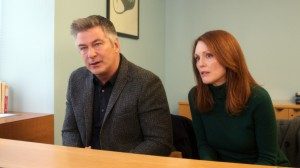 Q: Alice’s choice was to end her life by herself when she gets worse. What do you think of her decision? Would you do the same if you were in the same situation?

That’s a really compelling issue, obviously. Because of the way the story is told, in the novel and in the way the filmmakers tell the story, you are in Alice’s head. It’s so subjective that there’s part of you that’s thinking, “Wait a minute, is this what she wants?” Because you’re seeing the earlier Alice saying, “This is what I want,” but then you’re seeing the Alice that you’re watching now watching herself, and you’re like, “I don’t know if that’s what this Alice wants.” So you’re kind of left with this hung-up sort of feeling. Then later on, when John (Alice’s husband) asks if she wants to be here, she says, “Yes, I’m not finished yet.” So you’re never really able to answer the question. The question is asked and then you’re kind of left to meditate on it. What is it? What does somebody want? What is more valuable? At what sense, at what place can someone make a decision like that? I chose to see it as there was a point when Alice wanted one thing and there was a point when Alice wanted something else, and you have to kind of allow that fluidity, I think.