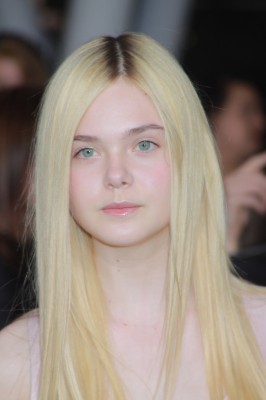 Elle Fanning, who plays Princess Aurora in Maleficent, reached her ultimate goal in life: To become a princess! Just like Aurora, Elle is very pure and sweet, a regular teenager who had a great time for her sweet 16 birthday. 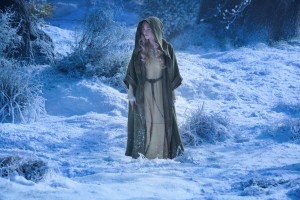 Q: When we were children, we always had a dream to be a princess. So you made it?
I know. It’s crazy. That was my dream when I was little. People would ask, ‘What do you want to be when you grow up?’ And I would say, ‘A Disney princess.’ That’s the ultimate goal in life. And to be able to say that you actually… I’m still like pinching myself to say that I’m Aurora. It’s so weird for me. A little girl came up to me the other day because she had been seeing the trailers and stuff. And she asked, ‘Are you Aurora?’ And I’m like, ‘I guess I’m Aurora.’ It’s crazy. 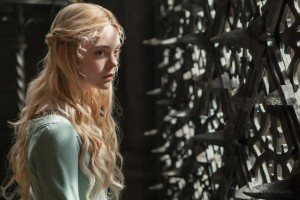 Q: Working with Angelina Jolie, what did you learn from her as an actress and a person?
I think that she’s the perfect role model. I feel like whatever she’s wanted to do, she’s done. Now, she’s directing and being a mom. It’s like she’s done everything, and she’s still not done with doing everything she wants. It’s just so incredible. You hear that name, and it’s like, such an intense name. And you think of all the pictures that you’ve seen of her and her at events and stuff. I was kind of scared. I was like, ‘Oh, she’s going to be a really intense lady.’ And then you meet her, and she’s not. She’s still like everyone walks into a room and everyone looks at her. She’s so powerful. But I got to know the side of her that was more sensitive and really playful. Like they would yell cut, and all her kids – they were on set all the time – they went to her. And she’d be holding Vivienne and Knox on her hip. To see that, and learn she’s very into the detail of things. She’s very specific like with her outfit. It really mattered, every little thing mattered, which to me, I learned from that as this character’s going to live with her forever, in her acting career, for life. So for me, I took that away to always really pay attention to all the little details. They all come together to make the final. 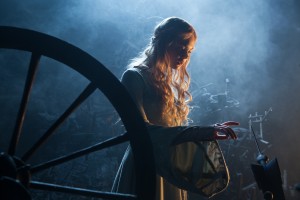 Q: Aurora became 16 and the curse became true. How was Elle’s sweet 16?
I filmed the film two years ago. I was 14, so I was kind of playing older. Yeah, so supposed to be 16 in the film, but now, finally, April 9th was my birthday, and I had a dinner. It was very girly. Lots of flowers, and it was Marie Antoinette themed. So we dressed up. We had little masks and stuff. That was fun. And a photo booth. That was my one contribution, because my mom, she loves surprises. So she decorated everything. But I was like, ‘We have to have a photo booth!’ and so we did. That was great. It was friends and family only. It was all girls. So all my girlfriends and then just my family. My sister came. I did it actually early, practically two months early, because I wanted my sister to be there. So we did that. And then I could kind of have two months of birthday celebrations.

Q: We can’t spoil this movie, but as we all know, one of the big deals of Sleeping Beauty is “true love.” What are Elle’s thoughts about true love?
It’s funny. It’s kind of been like a theme. And people have asked, ‘Oh, do you believe in love at first sight?’ and stuff like that. I honestly do because my parents have known each other since second grade, and they’re still together. My mom said – they were seven years old – and my mom would go around the house and play Mrs. Fanning when she was little. And it happened. This is what she said. She said, ‘I’m going to marry Steve, and have two blonde-headed, blue-eyed girls.’ That’s what she wanted. That’s all she wanted. And she did. It’s really weird. But she did. So I believe in it because that’s just what happens. A lot to live up to.