EXCLUSIVE: Hollywood’s Ms. Funny Lake Bell is so British in “Man Up.” Why? She confesses, “I cheated a little bit” 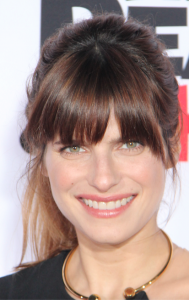 We often see British actors play American but it is rare to see American actors play British with perfect accents and mannerisms. Lake Bell not only had perfect timing but excelled at playing British. The star of the romantic comedy Man Up shared her tips, and also talked about the casting and her great chemistry with co-star Simon Pegg. 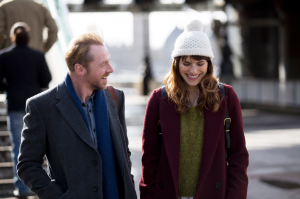 Q: You are really good at accents. What did you do to prepare to have a British accent?

I cheated a little bit. I went to drama school in England. For four years of my informative years, I went to college out there. All of those years of getting drunk and being stupid in college, I was surrounded by a bunch of British people. I was also the only American at my college. I had all of that time to fund up the different dialects and to do my research there. So this has been a dream to finally get to play a character from the UK. It was really hard. There was a dialect coach, Jill McCullough, she helped my research and we worked really hard two months beforehand. Then when I was in England, I only exclusively spoke in the dialect that I would use for Nancy, the actual reenactments. 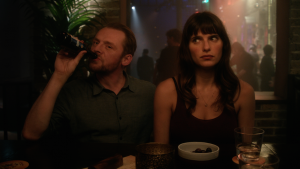 Q: Many British actors play American roles, but American actors don’t often play British roles. What was the casting process for you?

The people who made this movie, the company Big Talk, Nira Park (founder of Big Talk Productions), she had seen In a World and was a fan of it. A huge part of In a World is the dialect and accent obsession that clearly I had myself. She sort of had it in her head that I would be perfect for this role. We would either make it American or we can make it British because “she does accents and I believe that she can do it.” We got along so well. And Tess Morris (writer), Ben Palmer the director, we all sort of got along so well and it felt like, “Wow, this could really work.” Then they said, “Look, whatever you need to make yourself feel confident in the accent, let’s move forward and let’s just do it.” It’s really Nira Park and Rachael Prior (head of development of Big Talk Productions) of Big Talk that sort of took the chance.

Q: How was it working with Mr. Funny, Simon Pegg? 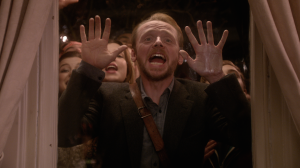 was thankful to be able to play comedy Ping-Pong with such a funny guy who is the constant comedian. He was so impeccably funny. I think there is definitely a lot of camradery not just between us but between our team. This is a very rare movie that the producers, and the writer, and the director feel like they are just as much part of the joke machine — even the dialect coach. We all were kind of a team trying to make the best version of the film that we could. We committed ourselves together. It felt very inclusive. We created a little community. 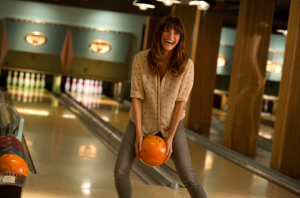 Q: How much do you have in common with Nancy? She was hesitant to jump into a new romantic relationship, did you have a similar experience?

I think what I relate to with Nancy, it is more along the lines of my feeling I know this person through my friends, my sisters, and my brother. I really sort of connect to her life via people in my life. Even when I shot the movie, I was nearly married… I was pregnant when I shot the movie. I was in a place of stability. I always enjoy characters, sort of single girls, who are depicted in a way that is very authentic, and real, and messy, and flawed, and silly, and cheeky. At the end of the day there is a place for the nature of Nancy that really read unique to me. Just felt like something that could fit in my mouth. 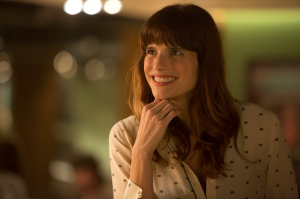 Q: How is it being a mom? Your daughter is 12 months old. Are you used to being a mom yet?

I can’t think of a more honorable job. I wasn’t sure if I would ever have kids, there was an assumption just because I get to do that. Now that I am in this position, and a very fortunate position to be a mom of my daughter, I am very thankful and I can’t imagine not having this experience. I think what’s the most surprising about it is that it’s so universal. There is this amazing common bond among all women who have done it — even fathers too. You are a part of this community that stretches from all races and nationalities and ages and it’s a very cool universal comradery. 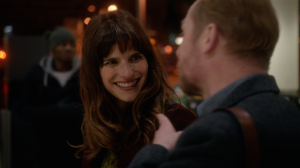 Q: Since I like this film, I hope you will make a sequel. I enjoyed this film more than Spectre which also has many British actors in it. Any plans for a sequel?

I don’t know. We’ll see. There was a joke because the movie is quite realistic. Who knows if they end up together? They probably will date for a couple of weeks and it doesn’t work out. It would be very funny to see them. After all, it was only one night.

Man Up opens in theaters on November 13th in Los Angeles and New York, then expands to additional theaters and On Demand on November 20th.