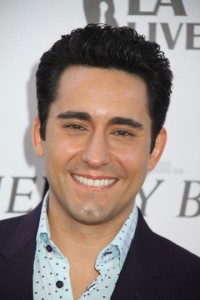 Musical star John Lloyd Young plays the same character which he won a Tony award for in this film version of Jersey Boys. Is there any big difference between the film version and the stage version? Has he met the real Frankie Valli and what influence has that had on his portrayal of the legend? He also tells what he learned from Mr. Clint Eastwood, the director. 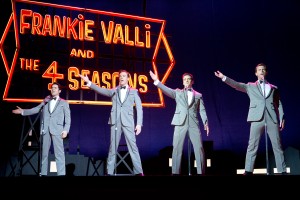 Q: Are the dialogue and choreography the same or different from the stage version which you are used to?

A lot of the dialogue is the same. We had the same choreographer on the movie as we did for the original Broadway cast. So his moves might be slightly adjusted for the screen, but as they say in choreography, it’s the same physical vocabulary. The moves are the same as what we’re used to from the stage.

Q: Did you have a chance to meet with Frankie himself?

Yes. I met Frankie for the first time before I had ever even done the show on Broadway. When I was rehearsing the show for Broadway years ago, he showed up by surprise in the rehearsal studio before I was even done with all my work of deciding how I would play him. I was very nervous to have him in that rehearsal studio all those years ago. Every time I’ve met him since then clearly it’s been easier. Over the years, as Jersey Boys has become a hit all over the world, he and I have become friends. 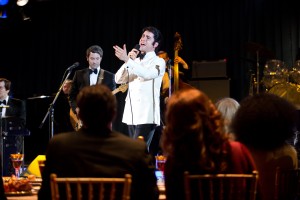 Every time I’ve seen Frankie Valli over the years, I pay attention to how he behaves, to how he moves, to how he talks. I’ve studied his recordings to listen to how he sings so that when I play him on stage or now in the movie, I have a lot of raw material to draw from. It’s kind of funny, he doesn’t know it, but every time I see him, I steal something from him [laughs], some sort of behavior, or some sort of insight that I get from the way he chooses to talk and the way he looks at life. So Frankie Valli is a little bit of a melancholic man, sometimes a little fatalistic. He knows that with the good comes the bad. He’s always aware of that. So I knew that I wouldn’t be really portraying him in an honest way if I didn’t let some of that sadness come through in my portrayal. 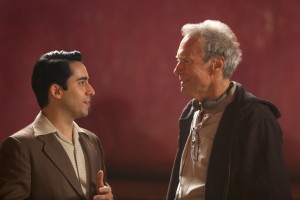 Q: What did you learn from Clint Eastwood? Did anything surprise you?

What I learned from Clint Eastwood is it’s almost always better if you don’t overthink it, if you just go with your first instinct and you just do what you think is the best idea and you don’t over-intellectualize. Clint Eastwood is very, very no nonsense. He likes to get in there, get the job done and go home. He likes to get the scene in one or two or three takes and move on. He’s a man of few words. But I actually found that working with him as an actor, he’s actually very kind and a generous and sensitive director. And for all of us guys on the set, it felt like he was our friend. Clearly, he was our boss first, but he also felt like a friend and we really trusted him and we knew that we had his support.