Exclusive interview: Multilingual Harry Shum Jr. reveals “cursing in Cantonese is pretty fun because it’s so emotional and so much expression within it” 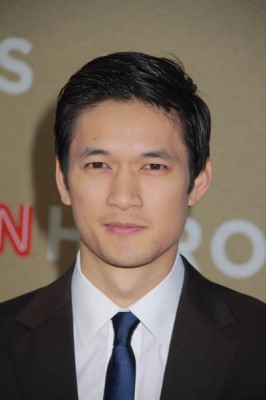 Harry Shum Jr. started his career as a dancer but after becoming a cast member on the TV series Glee, he established his acting career and a big fan base. Born in Costa Rica with a father from China and a mother from Hong Kong, Harry grew up in San Francisco as a Chinese American who speaks English, Spanish, Chinese and Cantonese.

In Revenge of the Green Dragons, Harry plays real-life Chinese gangster Paul Wong. It was a challenging role not only playing a very serious dramatic character but also speaking Chinese. Playing a real person, how did Harry prepare for the role including speaking Chinese? What makes him most proud about being Asian? What is he working on now? What language does he speak in his dreams at night? And what sort of encounters does he have with fans? Harry answered these questions and more in this EXCLUSIVE interview! 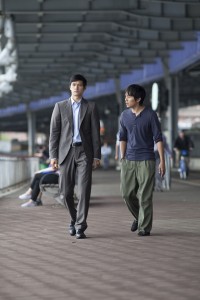 Q: How did you prepare for this role and how did you research?

The preparation work was kind of a balance between the two. There wasn’t much information on the actual Paul Wong, except for a little mention in what this movie was based off, the article by Fredric Dannen. In the New Yorker article, [there was] a little mention of Paul Wong in it. So I had to pull whatever I could from that, but also I got to meet Linda Wong who was friends with Tina, the real Tina, and who actually has hung out and met Paul Wong during the time. So she helped me get a glimpse of how he was and how he interacted with everyone else and to kind of figure out what his mannerisms were as well and to kind of capture that. But also a lot of it was developed, kind of created, by myself because you can only mimic a person so much. Then it becomes mimicry instead of actually coming from a real place. So for me it was really coming from what was motivation on doing the things that he was doing and also how he got to where he was at. That was made clear in the script and interpreting the script in that sense was really important for me. 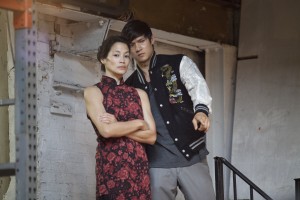 Q: How was speaking Chinese in this film? Did you practice?

Yeah, yeah. You’d be surprised, some words I had no clue how to say. But luckily, I had a Chinese director that was able to guide me to say the right things. But particularly with Paul, what I liked about his character is that he wasn’t the typical Chinese gang leader that you saw the other Green Dragons were. He was in a suit. He had manners, in that sense. He was educated, in that sense. And yet he was still conducting these heinous acts. But almost you would never know that he was part of that. He was very swift with his movement and how he would approach things and how he got what he wanted. And he kind of looked like a businessman that was part of Wall Street or was a lawyer. You would have never known that he was a human trafficker or a drug dealer or laundering money, especially during that time, especially being Chinese, and having to learn the language and being able to pull off an American accent or speaking English as well as anybody that was living in America at that time. I think that’s what was an interesting part for me and kind of drew me to the character. 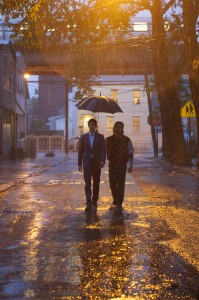 Q: As an Asian-American, what are you most proud of about being Asian? And what advantages and disadvantages have you experienced?

I think the advantage I have… Taking out what heritage I am, taking out where I was born, what I took out of all of that is being able to understand different cultures. And I think that helped me understand my culture better, because you’re not focused only on “I’m Asian,” “I’m this,” “I’m Asian-American,” but also to understand that I was born in Costa Rica and Latin culture is a huge part of my background. Growing up in America, the American culture is a huge part of my background and also Chinese culture, and its broader sense of calling it Asian. But my Chinese culture, I’m very proud of. I think in that sense, what my advantage is being able to understand the importance of knowing your background but also the importance of looking outside of your culture as well, because then you can progress I think gracefully, even though within this industry, it’s a little difficult sometimes. We always talk about getting roles, strong Asian-American roles. But I think at the end of the day, it’s about finding those roles that you can play and then you happen to be Asian-American. It doesn’t matter what that role is. I think that for me personally is what I want to strive towards. I think it’s really important for the community to be able to kind of take on that mindset and progress in that sense.

Q: You’re in New Zealand to film Crouching Tiger, Hidden Dragon: The Green Legend, what type of character do you play?

I play one of the lead characters on this film opposite of Michelle Yeoh and Donnie Yen. It’s a great story of old love and young love kind of coming together to set their differences aside and also putting their differences together and try and find balance back into the martial world. It’s a beautiful love story told through intense balletic martial arts movement. I think it’s a really great script and I’m excited for people to be able to see it. People will be able to see it on Netflix and on IMAX on the same day. So it’s going to be a really, really interesting and groundbreaking experience. 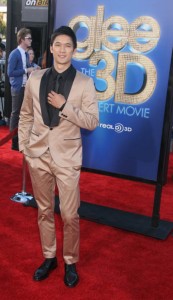 Q: What have you learned from working with action master Michelle Yeoh and Donnie Yen?

For this film, I only got a limited time of training. So it was making sure that I was able to try and utilize my dance background and give it that intensity and play into that aggressive movement while also making it very graceful. At the end of the day, you want to make sure to make the movement as graceful as possible for film as opposed to a real martial artist whose only intention is to strike the opponent in whatever way possible. So I did a lot of research on how I can make that happen with this film, because at the end of the day, you want to make it look beautiful as opposed to… no one knows how hard you punched a person [laughs] on film.

Q: Being multilingual, what language do you dream in?

Q: When you’re upset or feeling romantic, which language comes out?

I don’t know if you know, but cursing in Cantonese is pretty fun [laughs] because it’s so emotional and so much expression within it. And I definitely do that when I’m trying to emote in some way. But at the end of the day, it really is English. I can kind of speak it, so I guess that’s the one I use.

Q: What has been your most interesting fan encounter?

There’s a lot of them. I think what’s the most interesting is meeting fans that say like how your particular character changed their lives, especially with Glee. My character, Mike Chang, kind of looks like a soft spoken kid that never spoke much and kind of found his voice and his calling in life and going against what his parents wanted him to do. That’s I think, I guess not the craziest, but the most meaningful experience is having them say that it’s changed their lives and how it’s affected them so much that they were able get up and speak up for themselves and to kind of help them with their path in their life. That’s been the most rewarding for me in seeing that, outside of being recognized and being noticed, taking pictures with fans. That’s all surface. But it’s really great to hear that come from someone, another human being, to be able to exchange that with.

Revenge of the Green Dragons opens in theaters on October 31st.