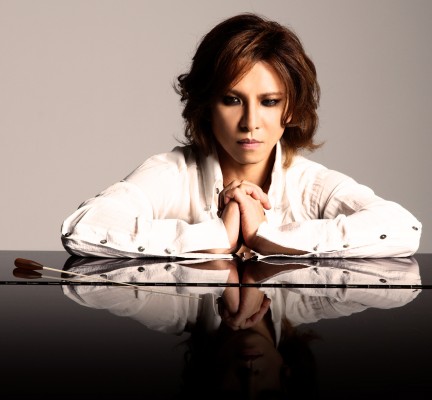 Yoshiki is the leader of the X Japan, which is representative of visual kei rock bands of Japan. He started playing the classical piano when he was 4 years old. Then when he was a teen, he became passionate about rock music and formed the band. Eventually, his band released many hit records in the Japanese music scene. He is now very famous as a successful musician and music producer in Japan. He wrote the music for the celebration of the Japanese Emperor’s reign and the theme for the Golden Globe Awards. Now Yoshiki’s new challenge is his solo world tour which will kick off on April 25th. He said the tour is the biggest test of his life because the tour’s set list will be all classical music and held at classical concert halls. I interviewed him in his own studio in Los Angeles. 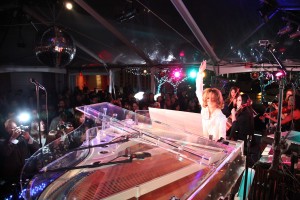 Q: What’s music mean to you?

Music is my life. I can’t live without music. I would not be alive if there was no music in my life after my father’s suicide when I was ten years old. Rock music saved me. Through rock music, I could get out the anger and sadness from my heart. Some people say that I’m alive because of this person. For me, it is music. I can be alive because of music.

Q: How have you changed after living in Los Angeles?

At first I came to Los Angeles to record for X Japan (Yoshiki’s band), then I bought the recording studio where we had recording sessions because it was really hard to book since it is a very popular studio. So then I became a resident here. At first, I was back and forth between Japan and here. I may say I officially started living here in 1998. After I moved here, I’ve become more interested in Japanese culture, food and the perspective of Japanese people. I became aware of the view of Japan from outside of Japan.

Q: How do you overcome difficulties? What gives you strength?

I organize a charity foundation. Through that organization activity, I have met a lot of children. They remind me that I’m very fortunate because I have no physical defects so that I can play music. Whenever I meet them, I feel, why am I thinking I am facing cruel times when some kids want to walk, but they can’t? My problems are nothing compared to some people’s situations. I help people through charity activities but these activities save me. 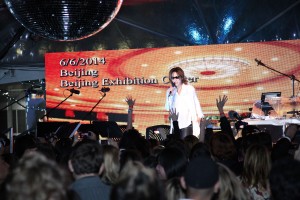 Q: What do you like doing in your free time?

Regardless of when I’m free, I always play the piano and write music. My favorite things mostly connect with work and/or business. For example, I produced the wine under my label because I like wine. I think my favorite thing without connecting with any of my work or business is love. But I’m very busy and I’m not often in love. [Laughs]

I can’t believe I play the piano in classical concert halls all over the world. So I think back on my life while playing the piano. Lately I often think about where I stand in my life now, what my life was and what I’m going to do. So I’m interested in my life now. I’m supported by a lot of fans so I have started to think about “how I’m meant to live.” I had often thought about “why I am alive and I wanted to die” before — very negative — but now I have become very positive in my way of thinking about life.

Q: What will you play on tour?  What is your biggest challenge?

I will play classical versions of X Japan’s songs, the song for celebrating the Japanese Emperor’s reign, the theme song for the Golden Globe Awards, but also I may play Tchaikovsky or Chopin. But I must practice a lot for that (Tchaikovsky or Chopin) [Laughs]. It is a big challenge that I play the piano as a music writer and pianist. In fact, I declined this tour at first. When I released my classical album, I had a mini concert at the Grammy Museum, because I am a voting member of the Grammy Awards. After my performance, I was asked if I should have a world tour with that type of concert. But I said, “No, no, no, no. Absolutely no!” Because it would be a big challenge for me. Even though I turned it down many times, I was persuaded. Then eventually I accepted. But I asked for some conditions which were: make three separate chunks of the world tour and avoid Los Angeles and New York for the first chunk, because I wanted to see how it was going and also I am not ready yet to do the concert in the middle of such a big city like LA or New York. I have gone through and overcome a lot of difficulties, but this tour is the biggest challenge for me. I’m confident in myself, but I feel very uneasy. I want my fans to cheer for me. I am developing many ideas for the tour but also I will practice until just before the performance. This world tour is the biggest challenge I have ever had and I feel like I am risking my life. [Laughs]