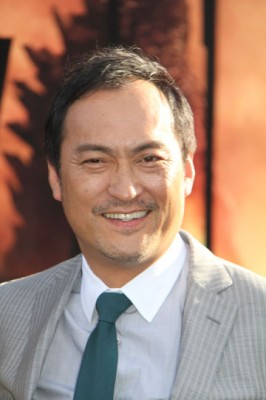 Since the first “Godzilla (Gojira)” was released in 1954 in Japan, this is the 60 year anniversary. Gojira has been loved by people all over the world — not only by the Japanese, but he has also attracted Hollywood. There was a failure in Hollywood 16 years ago but once again they are trying a Gojira remake. The new film’s title is also “Godzilla.”

Ken is the only Japanese actor among the main cast. He might have had some pressure because he’s representative of the birthplace of Godzilla but he said he did not have any pressure or any hesitation. I had the chance to have an exclusive interview with him, and since I speak Japanese, I was able to get a great, deep story from him. 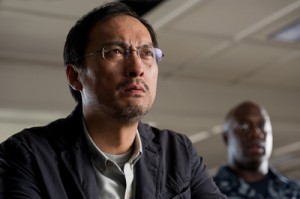 “I don’t think in this film Godzilla the monster was made in the US, because Gojira was born in the Pacific Ocean, so he doesn’t have a nationality. Even though the last Hollywood Godzilla film was a bad experience, this time, Gareth Edwards, the director, said, “Trust me,” and I found he had a very deep knowledge of Japan and the history of Gojira.

“The original Godzilla was released in 1954, five years before I was born. So I did not see it at the original time, however, I saw other later Gojira films whenever they were released. Spring, summer, winter, each vacation season, they released Kaiju films with double or triple features, so I went to see them with my friends. I am the generation of Gojira. But, I preferred Gamera more than Gojira since Gojira was a villain and Gamera was a hero at the time.”

Even though the director said, “Trust me,” Ken could not agree on one line in the script. When you see the film, we can see that Ken was right.

“When Dr. Serizawa explains about Gojira, that is the first time we hear the word ‘Gojira’ in the film. Gareth and the producers asked me to say ‘Godzilla’ but I did not feel it was right, because Serizawa is Japanese, and I am Japanese. It would be weird if a Japanese person said ‘Godzilla,’ since the Japanese named him Gojira and call him ‘Gojira.’ We discussed that and I won in the end.” 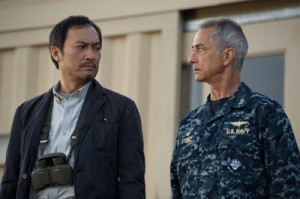 Since they used CGI to make the Kaiju, actors had to act while looking at just the air.

“They put some marks where we should look but we had no idea how big it was. So we had some meetings to know the scale of the object. At the scene where we visited the cave where Kaiju’s bones were left, Gareth explained by showing us some visuals on his iPad. However, we did not discuss much about the character. Sometimes too much information is obstructive. So in this film, I paid the most attention to thinking about how to play the scene where Serizawa showed his father’s watch.”

Ken is becoming an important actor in Hollywood and going up in status. He has been waiting to start filming with Matthew McConaughey for Gus Van Sant’s film “Sea of Trees,” plus Martin Scorsese’s film “Silence” based on the novel of the same name by the famous Japanese author Shusaku Endo.

Has he become used to Hollywood’s style of filming versus Japan’s style? 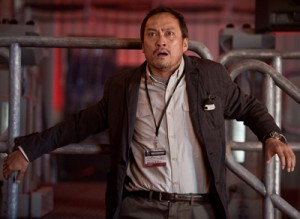 “After working in Hollywood productions, I learned a skill, which is adaptability. Each production takes place in a different environment and has a different style of shooting. Directors’ ways are very different too. It is very important how much I can adjust myself and adapt to them in order to show my best work. I have improved that skill. However, I can’t sleep before my shooting still.”

Ken’s name in Japanese characters means “humble.” Even though he’s established a successful acting career, he is still very humble and never gets too lazy to make an effort. What does he pay the most attention to in his work?

At the premiere of “Godzilla”. Ken mimicked Kaiju. The woman with him is his wife, Kaho Minami who is an actress.

“In the end, I think it is just an accumulation of how much I can work with good faith for each project. There is no theory like if you did this, you can be this. You just keep your good faith to show the highest quality of your work with every task each time you are given one. You just go and try your best with whatever you have in front of you. Ninety percent is effort. And the other 10 percent is luck or opportunity or fate to meet certain people. It is important that if that comes, you have to grab it. You should not let it go. There is no theory with luck or things like that. Each time, it is different. Even me, I have lost many opportunities.”

“The first time that I met Clint Eastwood, my breath stopped. It was before I worked with him. When I turned the corner at some awards party or something like that, Clint was standing there. Of course I introduced myself, but my breath stopped!”

“Godzilla” opens May 16th in theaters.