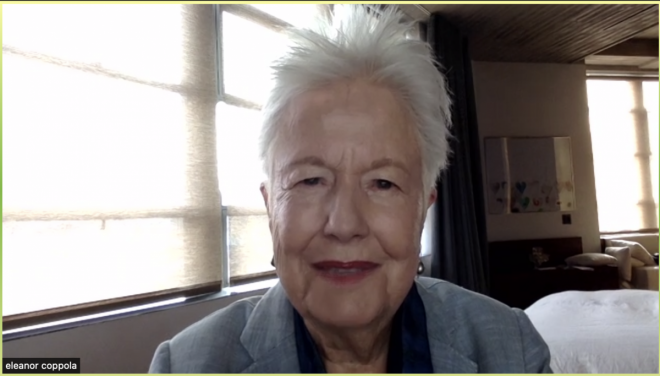 She is a wife, mother, and a grandmother, but she was production designer in the beginning and then she became a filmmaker. Eleanor Coppola is 85 years old, but she is still going. Her latest film Love is Love is Love opened in theaters last month and will be available to see streaming on December 14.

What is pushing her back to move forward? What is like to be the wife of a famous film director? What did she tell her daughter that she became a filmmaker?  She answered all my questions, and it is a bonus to hear she is a huge fan of Japan!

Q: Your new film is the story of someone who has lost a loved one. Did you use your own experience in the film? 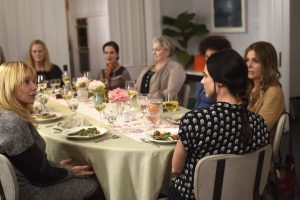 Well, a really good friend of mine passed away and her daughter had a reception at a sort of luncheon reception for her mother’s friends. And there were like maybe 30 people. So we weren’t sitting around a table like in the film. But I was very touched by the conversations remembering our friend and the things we didn’t know about each other. We didn’t all know exactly the same thing. So we all brought interesting experiences we had with her and talked about them. And it was very emotional and very touching. We were about to leave, and she opened the door to the study. There were a lot of scarves and pieces of her jewelry and her daughter asked if we’d like to take something to remember her by. So I now have a wonderful scarf that was her favorite color. And I wear it all the time.

Q: It’s interesting because your life experience gives you the passion to create the film. I admire you because you are still going. What push you to make the film – the really hard work required? 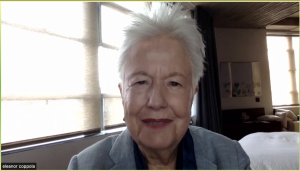 Well, when I was in my early 70s, I had a health issue and it was the first time I thought maybe I’m not going to live forever, you know. It really sort of stopped me in my tracks and said, what is it I want to do that I’ve never done and I had just had a trip through France with one of my husband’s business associates. And a lot of funny things happened to us. When I came back, I was telling a friend of mine about this trip and we were laughing together, and she said that’s the movie I want to see. And I just was like I had never thought of that idea before and I thought I fel fearless – you know – I’ve nothing to lose. So I just started writing a script and one thing led to another, and it took six years to raise the money to make Paris Can Wait. And it was a whole journey to do it. But I was, as I say it, sort of fearless. Every time somebody said, No, I just didn’t pay attention, I just kept going. I had a kind of perseverance and drive, just because I had nothing to lose. If I made a movie, and it was a flop, nobody would care if it was a success; it wouldn’t start my career. I mean, I had a kind of freedom. So I did that. And then I realized how much I liked that form. And I made these three pieces after that.

Q: In the film, there is the aged married couple’s story. I really like their conversation. Only acouple who have been married for years can do that. You and your husband, Francis Ford Coppola have been married almost 60 years. Nowadays, so many couples divorce. What is the secret of successful marriage, and did you want to tell the secret through the film?

It’s very simple. Don’t get divorced.  I think each couple is different. But my husband is very busy and very creative. And so lots of things are going on. And for me too. So when we come together, we’re interested in what each other is bringing to the table, so to speak, and it keeps it alive, I think and fresh, to bring each personality. You know, sometimes that clashes but for the most part, it’s a deep and daring experience to be with the same person for so many years.

Q: One of my favorite lines in the film is “there is no perfect life.” I think we can see that more and more because we are all aging. What did you find because you aged? What do you want to tell young people, especially women, who have a passion, who have a dream, if they have not made their dream come true?

I think we all have deep within us some passion or some purpose, that we’ve some abilities, some something that we are actually in this life to express, and I think each of us need to look into ourselves to know what those interests and passions are, and find ways to express them in the world. And I think a key is to not give up. You know, if you have something that you want to do and somebody says oh, that’s a dumb idea or, no don’t bother, you can’t do that. You need to get through all of that negativity that surrounds us and just really clearly go forward toward the goals that you set for yourself or find the way that you want to express your passion or your interests.

Q: Nowadays, women finally are getting the chance because of the climate of diversity. You are one of the pioneers. You went through all the hardships in Hollywood for us. How do you see the current temperature in the world, and especially in the film industry? 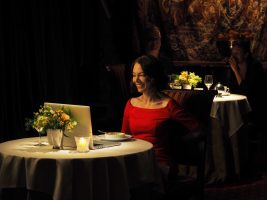 For me, it’s thrilling because at the time I got married, a wife was expected to be at home, taking care of the children, and making a nice home for her husband. And I married a very traditional Italian man, which I didn’t realize at the time. I wasn’t aware of Italian culture to that extent. I always thought I was gonna work with my husband. And we started out – we met on a movie set. So I thought I was going to work with him. And, you know, our kids would just kind of come along, and we’d have help, and we would work in the world together. But that was not to be. And so I kind of went underground. And I just kept doing things and making things and pursuing my passions, but they were all kind of small. So that didn’t disrupt my family life that much. As I got older, I had more freedom and more ability. And I was always kind of pushing my daughter to feel like she could do anything. And then I was thrilled to see that in her generation: she could, and she did. So that’s been a great, really deep appreciation of the changes in the culture and her ability to step into the world and be a woman and do things as I think she makes movies that men wouldn’t make, that she sees it from a female perspective. And that’s part of, I think, what’s going on in my movie here, that one of the reasons it’s hard to get funded. It is because there are no men heroes and there’s virtually no sex and violence, no car chases, no aliens, nobody dies of cancer, nothing blows up. It’s coming from a female sensibility. And I think that’s fair, women are an underserved part of our audience in our community, and I am happy to work within that arena.

Thank you for your interest. And I’m a great fan of Japan. I’ve been there many times and it’s a culture that really speaks to me.