From Cinderella to a Zombie fighter, Lily James shows her strength in “Pride and Prejudice and Zombies” 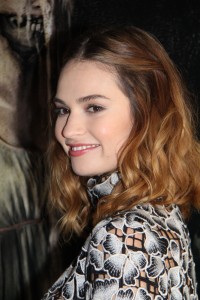 Actress Lily James has played with some of Hollywood’s heavy hitters. In 2015, she played out every girls fairytale as Ella in Disney’s newest adaption of Cinderella opposite Cate Blanchette. That same year she shared the screen with every woman’s Prince Charming, Bradley Cooper in Burnt.

Now moving into 2016, she follows Brad Pitt’s lead in taking on zombies as Elizabeth Bennet in Pride and Prejudice and Zombies!

In this interview with Lily, she shares what type of special training it required to face off against zombies and what her days were like working with all those hunky boys, and she hold nothing back!

If that wasn’t enough… she was wearing Saloni at this interview. Cool Level? 100!

Q: Give us your take on Ms. Bennet and what you liked about her and playing her?

I love a lot about her. I also get frustrated a lot by her. I think that Ms. Bennet is just the most wonderful, independent, forward thinking character anyway. And having her in this world where she can fight and beat up Darcy was really liberating and fun. What’s amazing about her is that I love her for her flaws. Not being able to understand her feelings and not being able to connect with Darcy. All those things are really lovable. 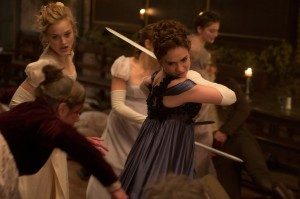 Q: How did you physically prepare for this role?

We all trained really hard. I did a lot of fitness, trying to get really strong, and get my stamina up. And then I did boxing and started focusing on martial arts when we were all together as sisters. And a lot of practice with swords. It took a really long time to get because it had to look convincing like we really could take care of ourselves and kill the zombies.

Q: Okay, let’s talk about the guys. Douglas Booth, Sam Riley… What was it like to play opposite them?

Douglas was great because when I first met him I was so in awe of his looks that I was just like, “He can’t be a serious actor. He’s too good looking.” [laughs] And then he’s actually really good. He really takes it seriously. He puts the work in. He was great to play opposite. 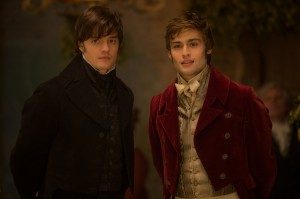 I think he’s such a great Darcy. I had so much fun working with him. Also, what’s unexpected about Sam, is I didn’t realize he’d be that good at fighting. He was so good and really kind when I really punched him.[laughs].

Q: This was a really physical film, was anyone injured during filming?

No. Not anything too damaging. I was pretty bruised and stuff. We got quite bruised on our arms. And funny stories? I had some issues with extras sometimes. I accidentally stamped on someone’s head. I thought it was a dummy. And it was a real person, so that was really bad. He stayed in character. And also there’s a bit where I’m up on the hill and they’re all running towards me. They just didn’t run out the way of the horse and I thought I was going to literally trample them. It was all so brilliant and dark. There was a hill. I think you can see in the shot I’m going, “Jesus Christ!” I was so scared I was going to trample someone alive on set. 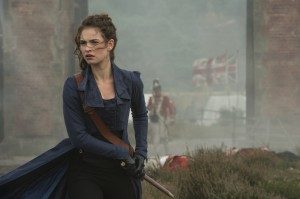 Q: Were there any particular scenes that you found hard or challenging to perform?