From Married with Children to becoming a Bad Mom, above all else, Christina Applegate is a survivor 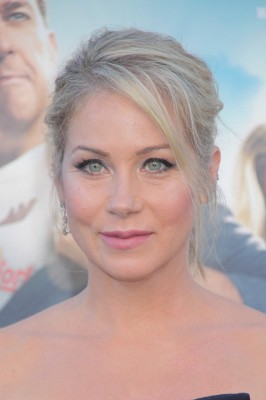 In the new comedy, Bad Moms, Christina Applegate plays very tightly wound mom with a major Queen Bee complex. She is running the PTA like a fortune 500 and has little patience for those that do not take it as seriously. This is the polar opposite character we originally fell in love with Applegate for – airhead Kelly Bundy. 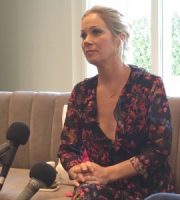 Years later Applegate has a successful acting career, is a mom herself, and is a cancer survivor. We chatted with Christina on if she considers herself a Bad Mom, and where she found the fight inside to battle cancer and win.

Q: You’re a mom in real life. What is the most useful advice your mother ever gave you? And would you pass that on to your own children one day. 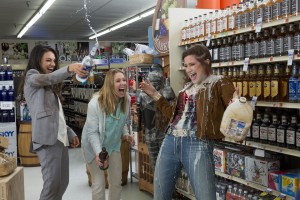 Q: Was there ever a moment in your life where you thought, oh my god, I’m a bad mom!

I think that this movie is depicting real mom’s who are not perfect. And the term “bad mom” is from the perspective of someone who’s judging someone who fails a little bit every once in a while. If we can accept that it’s okay to fail, then that doesn’t make you a bad mom, that makes you an awesome mom. Makes you awesome. It gives your children an opportunity to see that mistakes are a part of life and a part of growing. That’s what these moms are doing. They’re tapping out for a minute to rejuvenate themselves so that they can be stronger and better for our children. Everyday we are scrutinized by our parenting by other mothers and blogs and opinions on breastfeeding and vaccinating and there’s so much pressure to be perfect and I think this movie is saying it’s okay that we’re not.

Q: Have you ever had any run in’s with the PTA?

I’m about to. We’re starting kindergarten in August, so that’ll be my first intro in the PTA. We’ve only been in pre-school where we have room moms, but they’ve all been pretty cool. At our school there’s the PTA which is separate from the fundraising organization. So, there’s a whole organization that just fundraises for the school. It’s a public school, so we have to have it, but I don’t know what to expect. I don’t care what anyone thinks of me in the sense of I go pick up my daughter in pajamas and dirty hair that I haven’t washed up in seven days. I haven’t had a proper pedicure or manicure in about a year and half, so I’m really not that guy who cares if people are judging me as a parent or a human. So, I think I’m gonna be okay 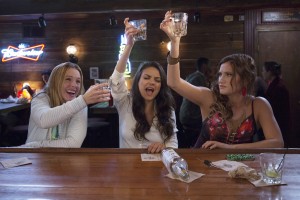 Q: You are a breast cancer survivor, can you share what you learned most during that experience?

I don’t know what I’ve learned from it. I don’t know. I haven’t learned anything from it. I just try to live as stress free as I can because nothing really is that important to put your body through that kind of stress. Stress is a bad one. There really isn’t anything important. Are you breathing? Then you’re good. But I’m the go to girl now for anyone who has a friend that’s diagnosed and I will usually take them through their full journey. I’ll sit on the phone for hours and hours and hours and that’s kind of my pay it forward. I try to build a sisterhood. I know women now who are doing that for their mutual friends and so on and so forth. It’s about building this community. It’s a beautiful community because no one really understands what you’re going through.

Q: That’s a little modest, remember I’ve talked with you a bunch of times. (laughing) You created a charity, which in my opinion is no ease feat. What’s the status of that now?

We’re preparing this July Bad Mom’s Hashtag moment. We’re going to try and create a bigger umbrella than just MRIs. We’re trying to sit down and expand what we’re doing. MRIs saved my life, but there’s also new tests coming out. There’s the importance of gene mutations. There’s all sorts of things and we’re really going to start to open it up now that we’ve been lucky enough to have a lot of companies partner with is and we’ve done a lot of fundraising this year, so we have enough to invest to make it a bigger and all inclusive foundation rather than just paying for people’s MRIs which we still continue to do.

Q: Do you have any instance where you notice your kids inherited something from you? A behavior or reaction?

Every day. It’s interesting when I was my daughter’s age I was incredibly shy. I was shy up until I ended Married With Children. And then one day I wasn’t shy anymore and I was super goofy. I started getting goofy more in my thirties. But she’s got all that now. And I realize she’s such goof with her weird accents and stories and mannerisms. And then I’m finding myself talking her while she brushes her self [in a Russian accent] “Little Silvia.” And all this stuff and I’m like, “Oh. Right.” She was doing my toe nails the other day, and we put on the meditation music because we do spa and there’s video of her sitting there and someone asks what she’s doing and she looks at the camera and she goes, [in a Russian accent] “I’m doing spa treatment. Okay? Go on. Go on.” And then she started painting. Why was she so mad about it? Super mad.

Q: Do you have a Russian nanny or something?

This just came out of her. [in a Russian accent] “I’m doing spa treatment.” Has she been watching Orange is the New Black behind my back?

Q: Would you ever consider embarking on a writing a career so that you could stay home?

It’s funny that you would ask. I’m considering deeply starting a blog that will be my version of what a mom blog is and what a mom blog should be which is super honest. And no advice because I don’t give other mom’s advice. Just a little look into how my day goes with my kid and the stuff that goes through the heartbreak of loving someone so much, things like that. That’s a thought that I was thinking of possibly doing because I have a lot in here that I have to say. I don’t know if I’d be good at writing. I love acting, but in spurts.