From MI6 to the CIA, Pierce Brosnan is back in the spy business for “The November Man”! 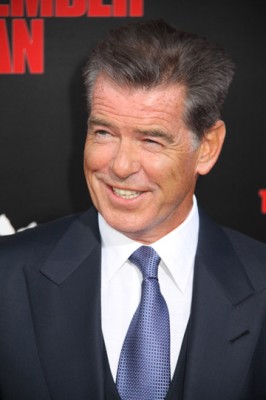 In his new film The November Man, Pierce Brosnan plays an ex-CIA agent, but he also takes on the role of producer for this film. He talked about his reason for producing this film, and also explained his character’s humanity. 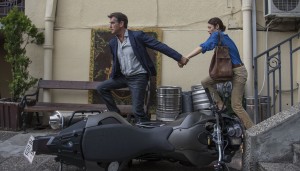 I am always impressed with how beautiful and elegant his movement is in action scenes. We can see it in this film as well. He told me during the TV interview (stay tuned for the video interview which will upload soon!) that maybe his dancing and Ju-jutsu background affects that movement, so then I got it. His action scenes seem like watching dancing! And that’s why they’re very elegant and beautiful. Since I missed Pierce’s James Bond, I am so happy to see him playing a cool spy with beautiful action movements. But this spy is not as cold as 007, which I also like about this film. We can see that his daughter has a pink (!) cell phone. It tells us of this super spy’s humanity and that he has a great sense of humor. I am very much looking forward to seeing the sequel and then a series from this film like 007 and Bourne! 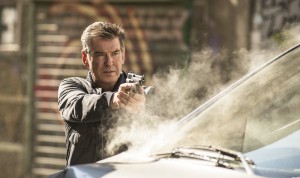 Q: Can you talk about the journey as producer of this film?

It just felt, after the Bonds, after my four outings as James Bond, there seemed to be unfinished business in the way that Bond finished in my life. And the demise of Bond going off stage left into the night seemed like there was a certain void there of, as they say, unfinished business. So Beau (St. Clair, producer) came to me with the idea. She and I have made numerous films, Thomas Crown and The Matador, so we had a good friendship and understanding of each other’s lives and lived so much life together with families. Bond was so big and mighty in my career and it is the gift that just keeps giving. I wouldn’t be here today in the company of you all talking about November Man if it hadn’t been for James Bond. So there was a desire, a want and a need to make this film, The November Man. I love the title. It has a sensuality and a mystique to it. And the writing of Bill Granger had a complexity of character and a punch and a grit to it which gave me the opportunity to really take the gloves off and be hard as nails and be ambivalent in my moral values as a character. So there was a complexity there which was seductive and enticing.

Q: Can you talk about the complexity of the role and getting to show some of your character’s humanity that we normally don’t see in these kind of spy stories?

He’s a highly trained individual. He’s a sassy operative. He’s a cultured bad-ass. He’s a man who has a life all of his own. And he’s someone who has been manipulated by his seniors. He’s a man who has somewhat found a peace in his life and we started the story there with this man kind of in semi-retirement, so to speak. The character of Devereaux, written by Bill Granger, just appealed to me because of his humanity, because of his workman-like attitude to the profession that he’s in. There’s fractures in his psyche and yet he’s extremely brutal and savage in his execution of what has to be done. He’s a working man. He’s a working operative. There’s no bells or whistles or gadgets. He lives a very simple life with his daughter, for his daughter. I thought it was a great springboard to launch this man onto the stage and that really came from Beau and Mike Finch (screenwriter) and Karl Gajdusek (screenwriter). Roger (Donaldson, director), as a good mate and friend, really came to the table and picked this piece up beautifully and really gave it an orchestration of cinematic flair. It fell into place so beautifully when he addressed the script and the characters.