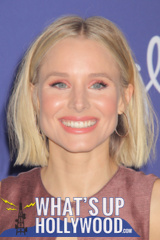 Kristen Bell is literally one of my favorite people in the entertainment industry. Usually when I speak to actresses, I can almost feel the wall between us and they try to keep distance from us while doing their best to appear personable. Kristen is different; in fact she’s the exact opposite. I almost feel like she’s about to throw on some pajamas and make us a big bowl of popcorn before our interview. We chat with the Bell of the ball on being so nice, working with Idina Menzel (played Elsa) who has been receiving massive praises for her vocals in the film. But I want to give standing ovation to Bell who does give great singing in the film.

Q: We heard you had one minor criticism about the first one. And it was that Jonathan (Groff, played Kristoff) didn’t get to sing enough.

I’m glad you’re bringing that up. Because I shouldn’t even look at you. You guys knew he was talented. That was my one criticism of the first one. I was like look, it’s an excellent film. But Jonathan Groff doesn’t sing, so that’s how it fails. But this time, everybody knew what to do, and Jonathan has dare I say, I mean, it’s very difficult to describe and I don’t want to blow it, but it was one of the best. It’s one of the top three moments of the film. Right?

And because we’ve spoken about this before. We talk about female empowerment and it’s led by two women, but I personally think that the representation that Jonathan gives for the guys is out of this world and it’s so subliminal, I don’t even know if people will pick up on it, but do you remember those lines we were talking about.

There’s one moment where Anna (Kristen Bell) is in distress and he swoops in and picks her up. And it’s in the midst of battle, right? And he doesn’t say I’ve got you and start taking over. He swoops her up and very quickly looks at her and he says “I’m here. What do you need?”

And then the other one, when Anna apologizes to him for something, she says I’m sorry. And he says… “It’s okay. My love is not fragile.” Which is just like the example of an egoless love like that. It’s just really profound. And I think people are going to be excited as to how the men are represented. 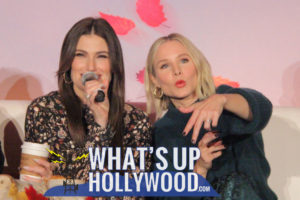 Q: How do you want audiences to feel when they leave the film?

I want them to — there are a few times in life where you get this paradox of feelings. One of them which is my very favorite is the moment you wake up from a nap and you know you don’t have to get up and you’re still in dream land, but you can just kind of stay there for a while, but you’re awake. That’s one of them. And the other one is when you have the feeling that you are ultimately fulfilled because all the cups inside your body of these different types of love that we’ve explored, self love, familial love, romantic love, they’re all full starting with self love. Let me just underline that. But you also feel like you are capable to go out in the world and accomplish things. And I would reduce it to not accomplish anything, because I don’t want the feeling to seem unattainable, but that you can accomplish something. It’s that feeling between purpose and fulfillment and drive. And I hope that when people leave, they feel fulfilled, but they also feel like stepping into their unknown might be exciting. 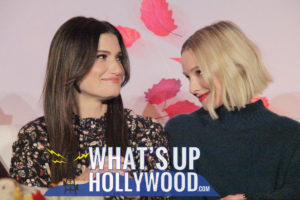 Q: What do you love about this film?

One of the things I love about this film so much is that it puts this sort of like very complex idea in front of kids in a totally simple way, which is hey, have you ever thought about the fact that maybe like past generations didn’t behave that great? That they could have done it better? And that’s called learning from the past. That’s called evolving. And the idea that like yeah, if I’m reading a history book, I’m going to go ahead and change some things. That idea. And I think that this generation, because of our social connectivity and this online community that is the Internet, we are able to talk about things, feel our feelings, and collectively decide that evolving is a pretty cool thing. And so I think that in order to evolve, you have to learn from history. And I think in order to learn from history, you have to know it. So I think that subliminal current of wanting to know origin stories comes from wanting a betterment for humanity by learning from the past.

Q: The ending is very pivotal for your character. What was your initial reaction when you first heard of the fate of Anna?

Oh, you guys have seen it? So I can say it. I mean, I literally get in — I’m sweating, because it’s a big company. You say it. [pointed to Chris Buck, co-director]

Chris Buck: When she becomes queen.

If that gets out, it was him, not me. You know, yes, it was very pivotal. And I remember the moment that I found out that that scene was written. And I couldn’t believe it, and yet it felt exactly right. And the way that it felt right was so perfect because if we had written it where Anna wanted to be queen, it would not have worked. That’s not Anna. Because Anna, the whole movie is working on her codependency. I mean, she doesn’t know what to do when she’s alone. And I know that feeling very well. It’s real easy to live for other people. And then when you’re alone in a house, you’re like, what do I do? I go literally, what do I do? But the fact that they wrote it as Elsa’s idea was this beautiful gift that was just matched Anna’s belief and drive in saying Elsa, your ideas are crazy and weird and also, I’m going to stand right next to you while you try to accomplish them. This ultimate belief in people. And also this like slightly maternal thing that older sisters have, the way that it was written when — the moment right before that scene when Elsa says like, making it right. It just filled me with so much joy because of course, it’s what you do to a codependent person when you have to encourage them. You know?

And can I also just say, I have two little girls, too. And I know exactly the feeling that you’re talking about. And the more I’ve thought about it and then having it shown it to them a few weeks ago, I really think that we’re always asked, why do you think the first one hit? I think my conclusion is, we don’t give kids enough credit because they’re projections of us and we want them to be happy and because we want ourselves to be happy all the time. We don’t give them enough credit for their ability to digest complex situations and trauma and struggle. And I think that’s why the first one hit because this character identified in kids, what do you do when you feel like two different things? When you feel shy and vulnerable and incredibly powerful. And I think in this second one, it’s actually, that’s the power of story. You don’t have to tell them that the world is a scary place even though it really is, but you can let them see a story that has a resolution. And it’s kind of like, you know why toddlers have tantrums, the things I read that says oh, they’re trying on all these emotions that don’t yet fit, because they’re practicing. It’s the same reason puppies play fight. They want to feel adrenaline and cortisol so they know how to handle it when they’re older. So I actually think that it’s great for kids to be a little bit on the edge of their seat, because it’s a safe environment to try on those emotions.

Q: And just to give you some quick numbers, 75 animators worked on this all from the original team. More than 130,000 frames for this project. So shout out to the animators.

And they’re happy. And we can tell, because often when I watch a previs, they throw some jokes in there. They really tricked me. Because let me tell you something, the first time I was shown the next right thing, I didn’t make the cliff jump. I went flop.