He is back! “Terminator Genisys” star Arnold Schwarzenegger never feels old! “I felt that I was in great shape and I felt really young” 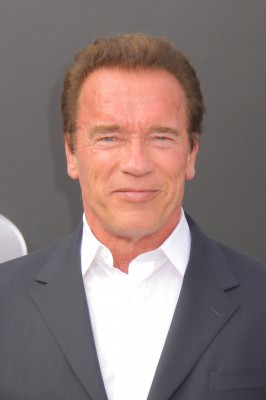 Arnold Schwarzenegger played a T-800 Terminator in 1984’s The Terminator.  Thirty years later, he again plays that iconic character in Terminator Genisys, varying from his current age to a young man (with help from CGI, footage from the original and a body double). It is a very interesting solution since Arnold gets to age, he is not a machine. What are his thoughts about aging? And the Skynet concept is very real nowadays since we connect cell phones, cars and even watches! What is his relationship with technology? And he revealed the behind-the-scenes story that he was offered the role of Kyle Reese in the first movie but it was changed to the Terminator!!

Q: What do you think about aging?

I thought that the writers came up with a great organic way to show the aging of the Terminator. Because the Terminator cannot go into time travel at a certain point because his hand is exposed, the flesh is gone, the metal is exposed. And if we cannot time travel, the others can. All of the other characters time travel within seconds. In the future, I have to go the old-fashioned way, the slow way. So I age, of course, decades of time have come along from 1984 to 2017; my hair turns grey and I age and stuff like that. This was a wonderful way of explaining how the Terminator ages, the human flesh, but the skeleton underneath is still the same, functions the same and the same size and everything like this. As a matter of fact, Alan (Taylor, director) asked me to gain ten pounds in order to have the same size the skeleton had in 1984. So I gained that weight and trained twice as hard, trained heavier to get more muscle size and so on, to keep the same frame and wear the same size clothing. But other than that, I aged. 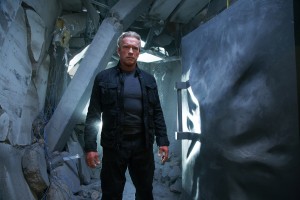 I think the concept and the way it was written was really terrific because this way we don’t pretend that I am this old guy. But I am what I am which is I have aged. So that worked really well. I myself don’t feel any older. I think because I have stayed in shape and I exercise every day. So when I started the movie I did the prepping two months before, I worked with the stunt coordinators, I worked with the director and with the special effects people and we exercised and trained for it so that we could do the movie and do all of the stunts that were necessary. And then whenever there were stunts that were dangerous, the stunt people took over and then did the stunts for me. I was delighted in doing the movie, without getting exhausted or feeling older, tired or anything like this. I felt that I was in great shape and I felt really young.

Q: What is your relationship with technology? 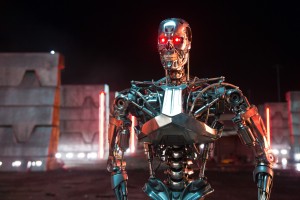 I embrace technology. I just think that in 1984 when James Cameron wrote about the technology everybody thought it was totally way out there and it was fiction. But now it has become almost reality. It’s like the machines have taken over except that they have not become self-aware like the Terminator. His is one thing we have to watch out for but I think technology is good. It can be abused like everything else but it is good and I hope that we will continue getting smarter, getting more interesting intelligence. We are going in the direction of artificial intelligence, or hybrid intelligence. A part of our brain would get the information, form the cloud, the other half is for you. So all of this stuff will happen in the future. 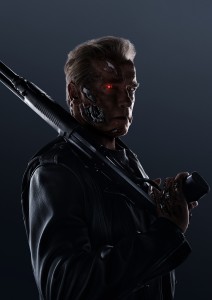 Q: Could you take us back to what you were thinking when you first signed on to do the very first Terminator movie?

I was approached to play Kyle Reese by Mike Medavoy. He said he had this great project and it’s an action flick, kind of low budget. “James Cameron, you probably haven’t heard of him, he has done one movie before,  this is his second movie, as far as we are concerned, OJ Simpson is going to play Terminator.” So this was kind of the dialogue. I said, “That’s great. Let me get the script.” And I got the script and read it and thought it was a really great script. Then I met with James Cameron during lunch and with John Daly. I started talking more and more about Terminator and how he has to train and how he has to prepare for this part, and act like a machine, and how he has to assemble and put together the guns blind-folded, how he has to practice shooting so he doesn’t blink and on and on. So the whole lunch went like that. And in the end James Cameron said, “Why are you wanting to play Reese? You should be the Terminator.” And I said, “No, no, no. Look guys, the Terminator only has 27 lines, I don’t want to go back. I really like Kyle Reese, he really says a lot and he is the hero. I started out by being the leading hero in a Conan movie so I want to continue on like that.” And he says, “No, but the most memorable character really will be the Terminator. The way I shoot it is this way and this way,” and explaining the whole thing. He says, “You should be the Terminator and I will make sure that you won’t have to think of the villain’s aspect because he’s a hero anyway. He’s going to do cool things.” He talked me into it basically. I said, “All right, I’m going to be the Terminator.” So that’s how that happened.

It was a small project with Anne Gale Hurd being the producer, and shot it in six weeks, seven weeks, made it the cheap way, and Stan (Winston) was helping us with the special effects. What was supposed to be a B movie ended up being one of the ten top movies for Time magazine. I was called the ultimate villain and at the same time the ultimate hero. So all of this great stuff started happening which none of us knew would happen, and then there was a demand for a second one. And then we did the second one that became the highest grossing movie of the year in 1991.  That was the launch of this franchise and it was bigger, bigger and bigger.