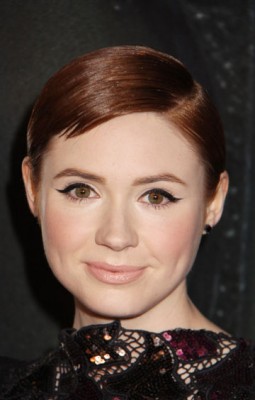 Nebula of this summer’s Guardians of the Galaxy, Karen Gillan, tackles a horror film not too different from her other role as Amy Pond of Doctor Who. In Oculus, Karen plays the sister in a family that has experienced some serious horror. After the death of mom and dad, the two siblings, Tim and Kaylie, attempt to defeat the deceptive and illusive mirror that has caused them so much pain. Karen answers questions to WhatsUpHollywood.com about her character, her deepest darkest fears, and the actual mirror used for the film. 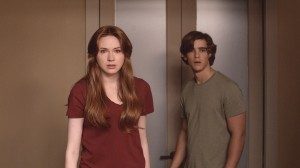 Q: What intrigues you about these characters?

One of the things I loved about the script so much is the time that’s devoted to the characters. So we really see them develop before things happen to them. So we are actually invested and care. We really earn the scare, which really excited me. And, I just really love the character I play. She’s just really interesting.

Q: The Lasser Glass reflects the victim’s darkest fears and insecurities. If you could look into the mirror, what would your greatest fear/insecurity be?

That’s a question, gosh! That’s a really tough question. You’re basically asking what our deepest darkest fear is. I don’t know. I would say, probably, not being able to do what I want to do, and basically not being completely fulfilled and happy. I don’t know how that would manifest itself in a mirror, but yeah, just that feeling of not being satisfied with my life would be the worst thing to happen to me. 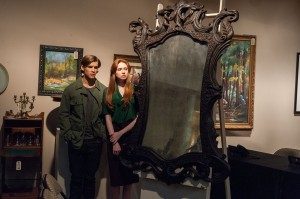 Q: What have you taken from previous roles to use for this character?

Well for me, I worked on a TV show called Doctor Who where we repeatedly had to be scared of something that wasn’t there. That came in really handy for this film.

Q: Did you have an actual adverse reaction to the mirror?

I didn’t really have an adverse reaction to the mirror. No, I really didn’t. It looks really cool to me. I sort of want it. Is that weird? That’s maybe really creepy. I would have that at my house.

Oculus is out in theaters Friday, April 11th.