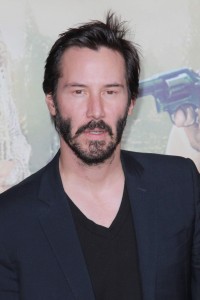 He was the chosen one in the Matrix trilogy. Now in his new film, Knock Knock, which is from the new horror king, Eli Roth, he is chosen as a victim by two hot young women who seduce him.  Did he enjoy playing the victim role? Yes, I asked your questions! 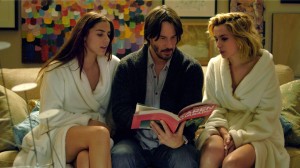 Q: What did you feel like being the victim?

The victim is fun in movies. But no, Eli created a great situation of trust, and Lorenza (Izzo) and Ana (de Armas) and I, we had such love for the material and we rehearsed in the house for like a week and we really got to know each other and know our perspectives on the roles and really go over the limits and where was the fun. Because the film, there is a seduction, yes, what does that look like. And then there’s also comedy, there’s thriller, and there’s some really emotional scenes and it was great to get a chance to work together and to flesh the project out. It was such great material that I think we all had fun doing that. 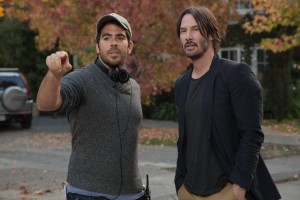 Q: When you were offered this project, did you ever have any trepidation about working with someone who has such a hardcore reputation for these horror films?

Yeah, I don’t think I was the first choice for the role, but I’m really glad it came my way. And when I heard that Eli Roth was interested in me for a role, I was really excited about that idea. In terms of the films that he had done in the past, that, if anything, made it more cool. I think in terms of his art and what he is doing and what’s in that, it’s really interesting and entertaining. So I was really excited about reading the script, and then reading the script just was so fantastic. And then hearing Eli, when he communicated his vision for the piece, I was really excited about that. Everything that I had hoped and thought of what Eli spoke about it in terms of his hopes and ambitions for the project had been realized. So it doesn’t happen all the time that you go into something and then you’re watching it on the screen and you’re like, “Thank you.” We were able to work this out. So it was cool.