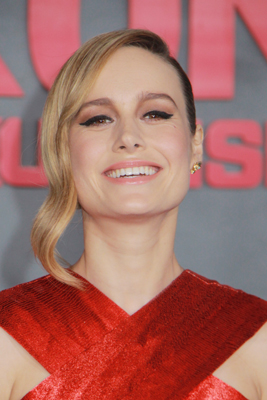 I was utterly impressed with Brie Larson from the moment I saw her. When she entered the room for the press junket, she held open the door for the entourage, including Hollywood vet, John Goodman. Clearly, winning an Oscar has not altered her humble spirit nor her organic interest in engaging with the press to promote her newest project, Kong: Skull Island. 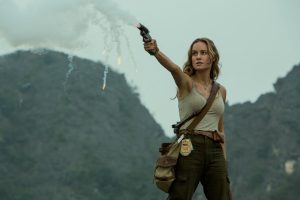 Q: In this film, Kong could be viewed as the good guy or bad guy after humans  drop a bomb on the island and don’t respect the planet and Kong comes to get them. In real life, we are in an environmental crisis so many have raved about the film’s subliminal message. What is your response to that and are you green in your personal life?

Well, I’ve always been really picky about the films that I make because I think there is such an incredible opportunity to bring up questions and some of my favorite films that bring up big questions are actually the bigger movies because you have beautiful visuals on the surface on this screen that’s bigger than you and incredible sound design and 3-D glasses, blah, blah but when you walk away from it, it hits you as something deeper. It’s a great, fun way for people to bounce around some of these harder concepts in our heads. I don’t really want to be a big, famous person so there’s a trade off in doing a big movie like this and it means less privacy and you give up something every time you do another film so I really question myself every time I do it. What’s the trade off?  And, for this it’s really bringing that message. Do we really need to control and dominate everything around us or can we let things be? Can we love something by giving it room to grow? That is exactly why I did this film. 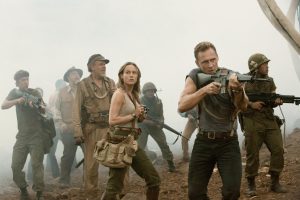 Q: I was personally thrilled the story line allowed your character to be a strong independent woman, partnering her with Captain Conrad (Tom Hiddleston) as an equal not a love interest. What was your response to that?

I think the film goes against convention in a lot of ways. We do have the archetypes that are quite normal that you’ve seen in Kong films before but, at the same time, you have more complicated dynamics like the one I have with Tom in the film where it’s not a traditional romance. It’s two people who do care about each other, who would step in front of a bullet for the other but it’s not because there is anything more than a deep, human connection. Mason (played by Brie) is also someone that, in big movies, and also the “Kong” films, I don’t think we’ve seen that before.

Q: You have a couple of Marvel comic projects coming up, Avengers: Infinity War in 2018 and  Captain Marvel(Brie plays Captain Marvel) in 2019.  Were you inspired to join the Marvel team after playing alongside Marvel Vets, Samuel (L. Jackson) and Tom (Hiddleston) or did you always have an ambition to be in a Marvel movie?

I’m not one of those ambition people. I don’t have specific goals. Being an actor’s actually quite passive. It’s the material that’s created at a specific period of time. I think you can get blinded by the concept of trying to check things off the list instead of seeing what’s actually available. So, I haven’t really thought about it in terms of that. I didn’t know I’d be doing those movies at all while making Kong. 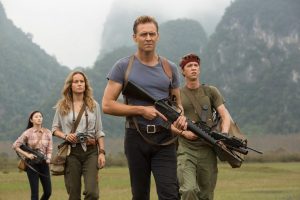 Q: What do you think about these cinematic universes that are potentially going to go beyond one movie?

I always loved mythology since I was a kid. Greek mythology, I remember learning about that in 4th grade and Egypt as well. Those were the two that I learned about when I was very young and they clocked with me. I just thought they were so interesting and beautiful. I like the fact that these characters take a face that is an allegory and is less about being so specific. We’re not talking about this world so much and it’s not about one country against another. We’re dealing with planets and a completely different set of terms and words so I think it becomes a safe place for people to bring up certain questions because it’s not about pitting anyone against another in the real world. It’s safe. 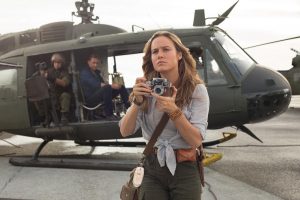 Q: You said earlier that you had no goal or desire to become a famous person. Where does that come from?

Being an introvert and really loving privacy because, for me, being an actor was not easy. I was constantly being on the verge of being completely broke and moving back in with my parents up until “Room” came out.  A few people think I’ve had this very lucrative, consistent career but I got paid eight hundred dollars for “Short Term Twelve” (2013) and I spent a year promoting it. It’s not a glamorous industry. It’s really, really hard. And, you get told all the time that you’re not this or you’re not that and you’re too into this so you have to find a center. I spent a lot of time getting knocked down and then collecting myself going “Why am I doing this? Why am I collecting myself to go back out there and do it again?” I think I naturally had to go to “This is bigger than me. This isn’t about myself. I want to service this story and characters and I want more awareness in humanity in the world and I don’t want this to be about me”. So, when I take on a character, it’s a sacrifice. There’s something that you give up every time. So, I want to play characters and stay mysterious. Once you know too much about me, it’s not going to be so fun watching me play characters. It’s just going to be me with a mask on instead of believing what the mask is.

Q: Now that you are famous, does it not suck as much as you thought it would?

I’m not famous and I really haven’t had any issue with it. I was a little nervous directing my first film and doing location scouts walking around Los Angeles all day and I didn’t have one person (recognize her). I didn’t have one issue so I feel really lucky that right now I have no reason to believe that my life is any different than it was.

Q: Did the Oscar make a big difference in your career?

In my career, sure. It definitely changed the perception. I talked with Jennifer Lawrence about it and she said “It’s kind of like our version of getting a PhD”. That’s a good way of putting it. That way it doesn’t feel so definitive. It’s not a thing you have to keep up. It’s a thing that you got, like a PhD at the end of your name and you move on. It changes some things in your career but I still question if I’m a good actor. I still wake up in the morning and go “Am I being the best person I can be? Am I doing as much good as I can in the world?” I never look at it and be like “Now, it’s all good. Now, I’m done for the rest of my life.”

Q: Will you get back to your indie roots after a big film like this?

I will. I just directed an indie film. I’ve never left. I’m firmly planted. (The film is called) The Unicorn Store and I’m in it.