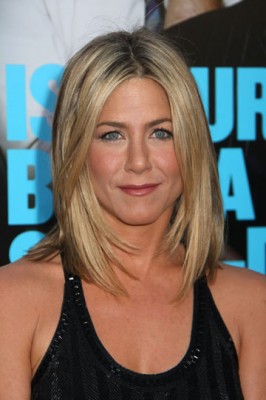 Life of Crime is the film adaptation of Elmore Leonard’s novel The Switch which takes place in the ’70s. Yes, the fashion is very distinguished from that era. Fashion icon Jennifer Aniston plays a beautiful wife and mom in this film. Yes, she wore giant sunglasses and very ’70s clothes. What does she think about ’70s fashion? Also she talked about the backstory of being executive producer for this film, and playing a teenager’s mom in this film. 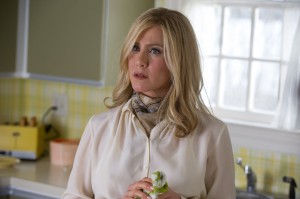 It was awesome for the time and a lot of fun to wear all of that polyester and the handkerchiefs around the neck. My favorite piece of wardrobe was the sunglasses.

Q: Did you get to keep them?

No, I didn’t. I basically looked like my mom. I pulled out a lot of her old pictures and tried to rock the old Nancy Aniston 1970’s look. 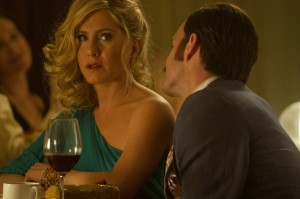 Q: You were a producer for the film called Switch and now you are an executive producer of this film which is based on the novel The Switch. Tell us the behind-the-scenes story.

Well, this man (director Dan Schechter) just impressed me to no end and I was so excited because I’ve always loved Elmore Leonard. I had read The Switch (the book which this film is based on), which was the actual name, but we had to switch because I was already in a movie called The Switch about best friends making a baby. Then I read the book and I love how he writes his characters. They’re all so interesting and detailed. Also his bad guys aren’t the brightest, yet they somehow always make it happen and they’re actually lovable.  I also thought Mickey’s character had such a beautiful arc and a powerful one. In that time to write that for a woman in the ’70s was pretty awesome. The whole package was really exciting for me. It was pretty much a no-brainer. 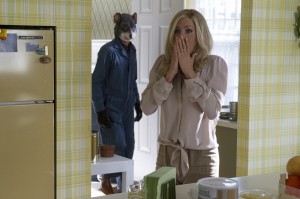 Q: One of my favorite scenes is your character, Mickey, and her son in the car. I can see some distance, but love. How did you get the chemistry and how did you research to play the teenager’s mother role?

It’s difficult because there isn’t that flow of communication that I think kids and parents have today where they talk about everything taboo. She kind of knew how bad the situation was with her husband, and she would let him act out or throw away some jabs at him. And her first instinct is to always be the good woman, the good wife. And then I think it was just such a beautiful exchange between them because it was sort of silent. It was more of acting with the eyes, and knowing that we’ll talk. “I know that you’re unhappy, and you know that I’m unhappy,” because he obviously, could see that he wasn’t treating me well. But at that time, she didn’t know how to tell him that she agreed with it. But yeah, again, it’s one of those wonderful scenes that you get to play, and it’s beautifully written.

Life of Crime opens in theaters on August 29th.