“Loving” star, Joel Edgerton shares his views on marriage equality, “We just made a movie that prompts the conversation”. 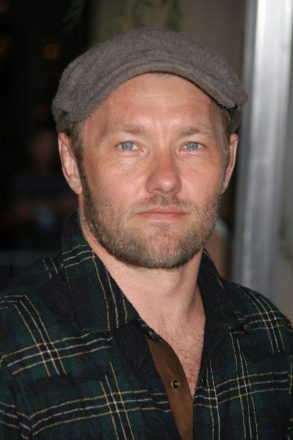 Australian born actor Joel Edgerton is one of the most versatile actors in Hollywood today,  bouncing from the school teacher turned MMA fighter in Warrior to the mentally unstable Gordy in The Gift.  In Loving, Edgerton takes on one of his most important roles yet as Richard Loving; one half of the couple that paved the way for the acceptance of interracial couples.

The character and relationship between the couple in Loving was tangible and speaks volumes against today’s cultural marriage climate. Joel believes the film is relevant today regarding same-sex marriage as it did with interracial marriage in the 1960’s.

Q: Can you talk about your transformation from an Australian to a Virginian? 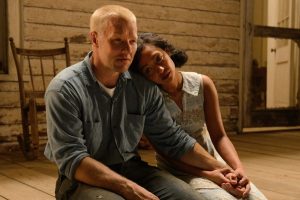 Ruth (Negga, played wife Mildred) and I had Nancy Buirski’s documentary, which was a complete road-map for how to create an impression, how to mimic the two of them – their accents and their posture along with makeup, costume and hair. We could look like them. There was something more that, I feel, like a performance of a real person has to go beyond an impression or mimicry. Because otherwise you end up on set concentrating on, “This is me with a funny walk or funny accent.” It’s about the relationship in this movie, and about whether the individual discoveries for Ruth and I came together. That’s the hard thing to study and quantify.

It became the important part for us, and I think the real-road map for that was just the screenplay. It’s very detailed and a lovely observation and portrayal of a relationship. It’s about overtures of love, speeches, and false declarations, or billowy curtains and love scenes. It’s about this space between two people that’s connecting this constant dance of, “you lead and I’ll follow, you wish and I’ll grant.” The deeper into relationships (you go) there’s a third mind that grows, where they chew at each other.

Q: He’s so quiet and she’s shy, but they have innards of steel. How did you see them in 1950s Virginia where racism was so important to the community around them?

Well the community was one thing and the community – as he says in archival footage, “we all helped each other, and we all looked out for each other.” There were many black, white, Robanic, and native indigenous people. The daily grind was just putting food on the table. There was a sense of otherness but there wasn’t a value placed on it. People from outside the community were like, “You can’t do that, you can’t marry each other.” There’s something in the two there. Richard’s silence I think.

They were very different people. For starters, he was very impotent under the power of the law. He was emasculated. His power to protect and provide was stripped. It’s a very generally male need. The law set up a fence around them that said, “You can’t go to Virginia anymore if you want to stay married, but there’s a fence of limitations in exile.” I think Richard didn’t think there was a way around that. He was sort of walking around inside that fence. He was sort of wishing that he could just go back to the way things were and was probably guilty of taking them to that place to actually legitimize their marriage.

Richard was walking around the limitations, but Mildred was kind of the one who stayed on her tip toes looking over the fence going, “It’s naïve to think we can go backwards, so how do we go forwards? What do we do next? What’s the help we can get?” In many ways I think she was the spine and looked strong. He was being sturdy in his hands and all that. She was the one that kept them together, and kept thinking of the strategy on how to move forward. The poster for me is very nice, because it says Richard is very much in native comfort. When he (decided) to go back to Virginia he says, “Oh no. If that’s what you want, that’s what I’m going to do.” He knew when to follow.

Q: Do you see a similar approach in narrative like Jeff (Nichols, Director) does? What was your collaboration with Jeff like? 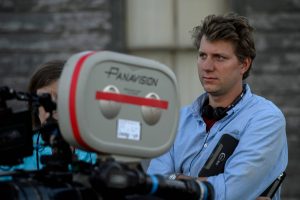 I feel like I love filmmakers who care about character. In a way we’re all human beings, and it’s an act where I feel safe when I’m acting in a movie that’s about real people. That’s not to say those real people can’t be living on another planet or spaceship or under the sea or whatever. It’s about the character and the humanity and the way that we relate to each other.

I was making a sort of genre movie, and it didn’t make sense to me to do that unless it was really about character and said something about human beings and the way that we treat each other. To me in a way, that sets up how you’re looking at the way things happen around you on planet Earth and how people in your community behave. As an actor doing that, I can work at how to puzzle it all together. As big as a challenge it might be to play someone like Richard, I could bring light to all the aspects that surrounded him, whereas if I’m living in front of the green screen, I find that an unsafe place.

Not because equipment might fall on my head, but I feel that’s when I get embarrassed by what I’m doing. I think the best word for me when I’m acting is specificity. If you can be specific and be observed, that’s great. For some reason when we’re talking about the silence in Richard, it wasn’t enough to just go, “I’m not going to talk.” Be specific about the silence and that specificity then gives the silence a real energy and charge of its own.

Q: In the scene where that guy says, “Well you don’t have to worry, you’re white. You can dump her at any time.” He is so devastated by that. Was that a turning point for the character? 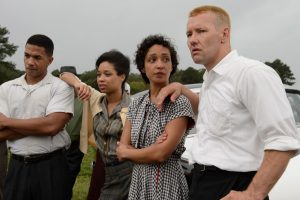 Yeah I think there’s something beautiful about that scene. I don’t think it ever occurred to Richard you can do that. When the judge says you guys can spend time in DC, but not Virginia together, I don’t think he ever really thought about it as a viable option. To be told that by a friend saying, “It’s easy for you because you can just go backwards if you want.” I loved that it was never an option for him. At the same time, they had the choice to stay where they were or to go forwards and it meant that he couldn’t satisfy that need in him to look after his wife and family.

He really wanted to think that he could look after them if all this went away. He could look after them, but they weren’t letting him. I loved that Mildred said after his death that she missed him and that he looked after her. Again looking at strength, she gave him back that power. That’s what couples do. Really good couples are in tune with each other’s needs and support each other. When one person falls, the other can prop them up.

Q: Do you think there’s some resonance out now, after we’ve had such huge debate about marriage that’s gone ahead now and echoes the whole theme of this movie?

Yeah I just like the whole theme of this movie in general. In Australia right now, they’re not even voting. Gay marriage is not legal. They’re proposing a plebiscite, smoke and mirrors. “Let’s have a vote to see what people feel,” but it’s not going to be a legitimate vote. The government is standing in the way of change. It’s ridiculous and it’s shameful and I love the fact that I get to talk about this to journalists because I can point the finger of shame at their government for their backwardness. In terms of equality, I think this is a window into the lives of two simple people who were judged and treated badly.

I think it’s good for all of us, because no matter where you come from in the world and whatever experience with justice you’ve ever had, we all have experience with judgment. We all have thoughts about each other and judgments and I think it’s good to see a movie like this and go: “Okay.” In the spirit of mind your own business, if I don’t have a real say in someone else’s life, why should I have a say, and why should I judge them? Why should I judge them when it leads to opinion and aggression or acts of violence? It’s funny because when I thought you were liberal-minded, you were just liberal-minded, and if you were pig-headed, you were just pig-headed. They compartmentalize.

It’s cool for an African American person to marry a white person, but if you really probe me I don’t think two men should really marry. Then it’s like, “examine that judgment.” We’ve just made a movie that prompts that conversation, and we’ve just made a movie that evolves from that gentle place. I think the problem we’re experiencing right now in so many areas is that the debate is so intense. In these flashes of intensity, it’s very hard to listen when there’s shouting. It’s very hard to turn a corner when you’re speeding. I think if things can quiet down in any pocket, even between two individuals, can create a conversation where people are listening and taking on board any ideas.

The assumption is that politics are there to play to people in order for them to vote for the politicians. It always boils down to individual thinking. The problem is that individual thinking en masse is a problem if it’s negative. If you could change individual minds, and those people are going to procreate, let them pass that good thought down to the next generation, so that children don’t constantly (do it).  It’s almost like there’s a conveyor belt. Children are born, they can’t see color, so they can’t add judgment to it, and then someone teaches them something. Then they become the next people who do the bad stuff.

Q: How do you feel about the best actor buzz? 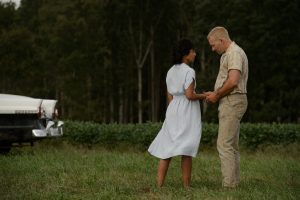 It’s very flattering and it’d be dishonest to say it doesn’t tickle the ego a little bit for all of us. I’m very careful, it’s happened in the past and various stories of my life or tickets to my parade and having expectations about things. I’m just very wary of that. As part of my diversion tactic to that question, it’s really good for the movie.

It’s a really small movie to have that extra buffing around the movie. This movie like most (of my) movies, I really want people to see these because people are sympathetic. Particularly people like me who’ve had a smooth ride of getting everything they’ve wanted. That’s really been my life and a big takeaway from my life. Wow, I’ve managed to get through so many years of life without experiencing many speed bumps, and that’s very rare.

Loving is on theatres now.