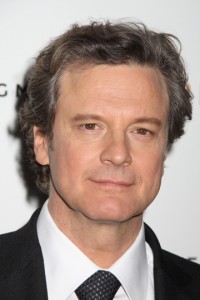 Colin Firth plays a skeptical magician, Stanley, who doubts mediums and only believes everything has a trick behind it. How about Colin himself? Does he believe in mediums? Has he experienced anything supernatural? He also confesses this film had the most dialogue he’s ever had to say! How hard was that? 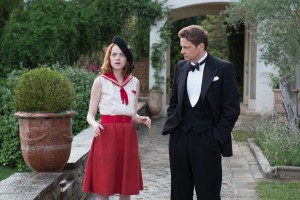 Q: Do you believe in the supernatural or mediums yourself?

I believe mediums exist! [Laughs] I don’t know. I absolutely don’t know. Nothing has ever happened to me that convinces me that it was supernatural. But I’m pretty comfortable about being open about it really. Unless you’ve had something happen to you which is compelling, I find utter certainty on the subject absurd. I don’t know. If you don’t know, you don’t know. So I rather enjoy not taking up a position on it.

Q: How did you manage the extremely large amount of dialogue in this film? And you smoked a lot! 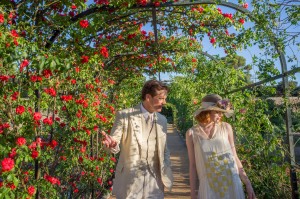 Yes. I got by on nicotine. My God. Yes. There’s no question, it’s the most I’ve ever had to say in a film. And some of it alone too. Dialogue is one thing. It’s easy to remember. Somebody feeds you a line, you respond to a line. You’ve got the dynamic. But when you’re alone in a room, a monologue is one thing, but a soliloquy and there is nobody else on stage… It comes up in Shakespeare and classical theater but you don’t normally expect it in a film, because the convention of, why would you ever speak alone in a room in a movie? Well, a prayer is possibly one of the only conventions I can think of. You can include the telephone, because there wasn’t anybody on the other end of that and Stanley does monologues anyway. So there are a few of those. They were daunting because you’re still trying to tell a story through those moments, and particularly the prayer is one of the biggest twists in the film. It’s a change and it’s up to me to make that happen alone. First, you have to make sense of it. But also, you just have to know it because knowing you’re about to go work with a director who doesn’t rehearse and doesn’t prepare and doesn’t talk you into things and doesn’t talk you through things, you’ve really got to at least have familiarity with it so that if he says, “Don’t do it like that, do it like this,” you can remember it without blinking. I had the script for long enough that I just made sure that I learnt far more thoroughly than I normally would. But it was very interesting trying to navigate through that monologue and say, “Well, the whole plot is going to turn by what happens in the middle of this thing where there is nobody else except God who Stanley is only half believing in at that point.” But I realized there was something that was so cleverly woven into the psychology of that, that you can make sense of it. 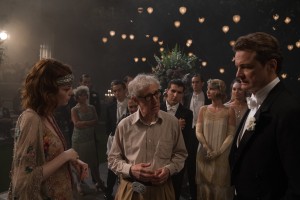 Q: Any improvisation in it?

Yes, there was too. He invited us to. “Say how you want. If you have a better way to say it, I don’t mind.” He’s not precious about the dialogue. The trouble is that the formality of my character’s speech patterns and the fact that he’s witty means that I didn’t really feel that I was equipped to suddenly come up with improv. If you’re doing Oscar Wilde and Oscar Wilde says, “Well, think up some of your own dialogue,” and you’re not Oscar Wilde, the pressure’s on. So I didn’t really feel I had the improvisational skills or the writing skills to improvise brilliant aphorisms. But in the scenes where there was less of that and less formality and less structure, yeah, some of it’s my own words.