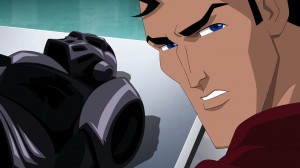 And you thought Kryptonian villains and renegade evil scientists were a problem!  The Man Of Steel faces challenges both cosmic and earthbound when he returns in the new animated feature SUPERMAN: UNBOUND.

This new adventure stars White Collar’s MATT BOMER as The Man Of Steel. Bomer elaborates the problems Superman faces in his human and superhuman lives: Lois Lane wants their relationship to become more public, while he is trying to protect her from the danger this will bring. Meanwhile, he must deal with a family situation, as his cousin Supergirl is growing into an impulsive, angsty teen. She has colossal powers, but neither the discipline nor the wisdom to use them wisely. Add to this the menace of Brainiac — a superintelligent android with incredible strength and a weapon that can shrink down an entire city! He stole Supergirl’s home of Kandor, and has now set his sights on Metropolis. To defeat Brainiac, Superman will need Supergirl’s help… but will she cause more harm than good?

SUPERMAN: UNBOUND arrives May 7, 2013 from Warner Bros. Home Entertainment on Blu-ray, DVD, and video on demand.