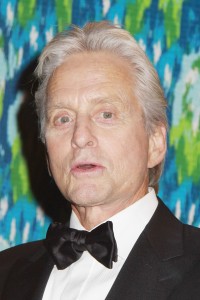 He’s been Gordon Gekko (WALL STREET), D-Fens (FALLING DOWN) and Taylor (A PERFECT MURDER), badasses all around. Now Michael Douglas adds another caustic character to his resume: Medec, the cold blooded, wealthy psychopath of his new film BEYOND THE REACH, which he produced. Douglas talks with WhatsUpHollywood.com about producing versus acting, shooting on rough locations, and his real-life luxury indulgences. Young actors, take note: Douglas gives audition tips, too. 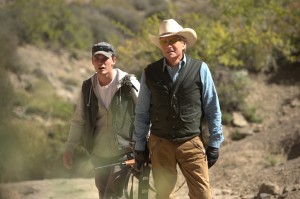 How was it sitting in a luxury Mercedes, sipping a martini while a young actor had to stand in the desert in his underwear?

Well, I was the producer. So it’s one of your better acting jobs where I’m wearing both hats. With acting they pay you to focus on your part, your role, whereas in producing you have to … have [a] 360-degree vision of what you’ve got, of what’s going on. So I usually don’t enjoy it a whole lot. Although I enjoy the risk-taking, the physical aspects of sort of being outside in an environment. I think back to ROMANCING THE STONE, THE GHOST IN THE DARKNESS, productions that I did in rough locations. It creates an esprit de corps. It kind of brings everybody together. There’s not much else you can do out there in the Navajo Nation. It’s about an hour and a half away, if you’re lucky, from your hotel room bed, and so it brings out the best in everybody, or it doesn’t. In this case, we were very fortunate to have a great New Mexican crew made up of a lot of people who love mountain bikes, hiking and this and that. This is just the kind of picture that they wanted to be involved in. I think it was an inspiration for both of us [referring to co-star Jeremy Irvine] to watch (the crew) climb up the rocks and go at it. 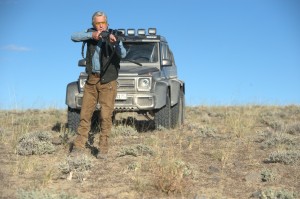 What’s your luxury? You’re character buys a nice car and sips martinis. So how about Michael Douglas’ luxury indugences?

What’s my luxury? I tell young actors, “You’re going to love it! It’s a beautiful part of the country you’ve never seen before. You don’t have much wardrobe to worry about. Oh, the makeup? Yeah. I know, the sunburn, because we don’t want you to get sunburned two or three different levels so you have to put on special stuff.” [laughs]

For me, my luxury would be boats. I like to charter boats, sailboats, to take the family and go off and scuba dive. I like to dive. 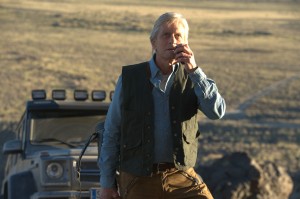 What was your worst audition experience?

I did terrible auditions. I have terrible stage fright … I was very nervous and so generally was not very successful in many of my auditions. I auditioned a LOT because I didn’t get a lot of parts. I think the secret of an audition is to try and get it in the morning. [Jeremy turns to Michael, intently listening] Get the audition in the morning rather than the afternoon. Depending on the part, they may see 40 people in a day and if you get them after lunch, they may have had a couple of drinks and then they just don’t know. Get them in the morning.

The ANT MAN trailer just came out. Could you give us some info?

If I give you any tidbits, I get a Marvel blow dart to my head. I’ve never seen a company more conscious of their content. Yeah, it looks good. We just did a couple of re-shooting, ADR things, and it was the first time I’d seen a lot of it. These Marvel guys haven’t missed yet. From AVENGERS and everything, this is more in tune with GUARDIANS OF THE GALAXY. It’s got some humor. Paul (Rudd) does a great job. My kids are going to be very happy.

BEYOND THE REACH opens April 17.