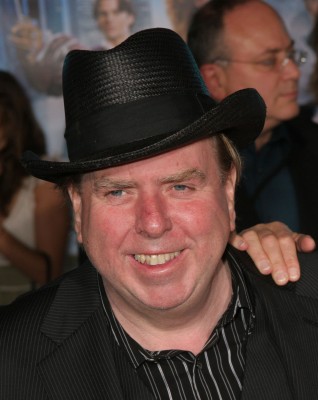 The best actor winner at the Cannes Film Festival for his title role in Mr. Turner, Timothy Spall, a veteran actor in England who played Wormtail in the “Harry Potter” series, sat down with us to talk about his experience becoming a legendary painter and his seventh time collaborating with writer-director Mike Leigh.

Q: How was working with Mike Leigh again? 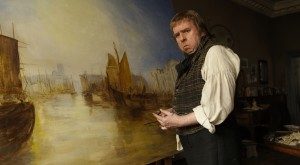 I don’t know how much you know about how Mike works but he doesn’t mind people talking about it because he has a very particular formula that he has invented where the work is made up basically. You start with nothing and he’s very blatant about that. He says, “Here we all are together. In a year’s time, hopefully we’ll have a film.” Eighty percent of his pieces are contemporary pieces — this being his second or his third, but his second piece based on somebody that existed. So he uses this technique where you come to the characters through improvisation. You create a proto human being out of people you have encountered in your life and you start building up this person and you start becoming this person. He’s doing that with all the other actors. Then you start to form that person, in this case, trying to make this person reach towards the research that you’re discovering about the character. So you spend a hell of a lot of your time reading and discovering and observing of the work and looking at the material. 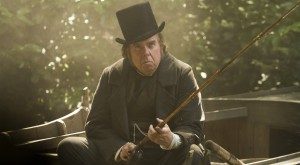 Q: Turner did the grunts occasionally, so what does he mean by the grunts?

The grunts and the different sounds are something that he is getting it, seeing it, feeling it and could say a million things, but rather than saying a million things, he just goes, [makes grunt noises], pulls it in and packs it in and shoves it down there. It’s almost like naturally he stores it in this pressure cooker that comes out the other end. 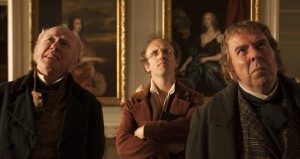 Q: Did the real life Turner grunt a lot or was it an idea from Mike Leigh and you?

There are reports about how he spoke and about how he was. It’s a mixture of the two. We read almost everything there is written about him. There are times where he is very expressive and he speaks a lot more than people actually realize. He actually speaks in a very colorful tone. People come away with it that he only communicates with grunts. I know he speaks a lot because I had to learn those lines and speak them. He had a sophisticated baroque way of talking. That is reported. 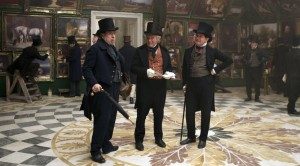 It was famous that people couldn’t understand what he was saying. I know what he said was right because I had to read all his books so I knew he knew what he was talking about. The way he expressed himself was hard to understand and there are reports where one time he would be very expressive as he is in the academy. He’s very convivial and very open and sociable. But there are also reports where he would sit and stand and people would ask him questions. Delacroix, for example, the great French artist. When he went to see Delacroix, he showed him around his studio and Turner would look at him and just say, “Mmm… fine… mmm… yeah,” then left. Delacroix said, “Who the hell was that? Is that Turner? The great Turner? He could have had a carrot sticking out of his pocket, he was like some horrible farmer.” So little things like that, although we didn’t go out of the way to make him, it just grew. 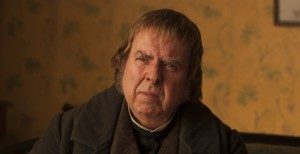 Q: You suffered from leukemia. How did you overcome this experience and move forward in life?

Having a scrape with your own mortality is not something that you would choose to have, obviously. But you find yourself in this situation, you get on with it, then you throw yourself upon the trust of providence, and what gets you through these things is a profound mixture of love and expertise. The expertise comes from the people who are clever enough to stop you dying from the leukemia and the love comes from good will and your desire to get over something because there are people you love. Not everyone makes it and there are still people who die of leukemia and it’s a great tragedy. I think all terrible things if you get over them, and this is cliche, but what doesn’t kill you makes you stronger. However, it makes your center softer, but I think it’s always in there and it will always be there forever. But what happens to you when you are getting better after a near death experience is you spend the time enjoying the very simple things in life. Looking at a tree can be enough. Watching a child play can be enough. Looking in a child’s eye can be enough. But that’s profundity. You can’t live your life living in a state of profundity otherwise you won’t get anything done. You’re Tim the profound, you’re a bloody bore. What happens is, you start getting petty again, but that’s life. Life is not all about profundity, life is about little triumphs and little defeats. So you can’t spend all your time being profundity. Once you start being petty again, you know you’re alive.