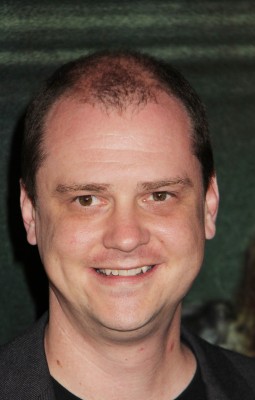 It started with a 2005 short film about a haunting mirror, the Lasser Glass. Featuring only one actor and made for just under $1,500, the short film titled Oculus has grown up. Mike Flanagan, director/producer/co-writer, has taken that original short and created one trippy feature horror film. 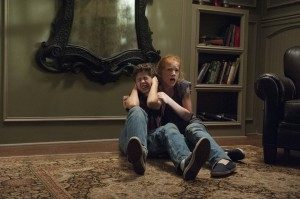 The villain is an inanimate object, a mirror that has caused horrible trouble for all of its previous possessors. It is a film dependent on deception, constantly questioning you on what is real and what is merely an illusion. Brother and sister Tim and Kaylie, the Lasser Glass’ latest possessors, are dealing with the demise of their parents ten years earlier, and seek to destroy and overcome their resilient inanimate adversary. A film filled with violence, deception, and suspense, Flanagan talks to WhatsUpHollywood.com about the peculiar way he unveils this story, the über-intense horror fanatics, and the origins of this film (the Oculus short).

Q: What was the process and difficulty of creating and writing this braided timeline story?

The idea was always we could take these two stories, braid them in a way where the transitions are getting tighter, tighter, and tighter, and we’re bouncing back more and more frequently hopefully to the point that the two stories bleed together into a way we can’t tell a difference any longer, and the characters can’t tell a difference any longer, especially when you’re dealing with a monster that is an inanimate object. The only way to sustain tension over a long period of time which is a big concern coming off the short, because I thought we pushed the limit at that point, was to create a sense of distortion and disorientation that would be similar for the viewer as it was for Tim and Kaylie in the room. That could only really work by making the narrative as disorienting as possible. Of course that means you’re creating a nightmare in terms of a continuity perspective, making it much more difficult for the actors to maintain continuity within their own performances, but that was clearly going to be the challenge of it. That’s something we leaned into early. We’re going to go with the most difficult road and just really hope it comes together. 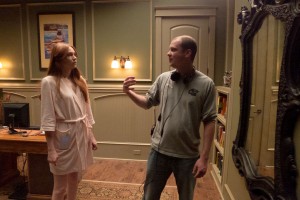 Oh, yeah! You’re talking about some of the most enthusiastic fans out there. You’re right. As one of them we analyze and dissect, take it so seriously. Fans are so eager to protect the genre from itself in a lot of ways. There is going to be this intense additional scrutiny just because you are putting something out there into a market that’s got this fan base that’s so rabid. As one of those fans that makes me really happy. As a writer that’s really tough, because it was at every draft, what are the questions they’re going to ask? Where is somebody going to throw up their hands? And more importantly, in the movie, where can we give voice to those fans? Where in the movie can the person [be represented] who sits in the theater and crosses their arms and says, ‘Why don’t you break it?’ Where is the character in the movie that says the same? So they can say, ‘Oh, okay, so my perspective is being represented by a character in the film.’ Knowing that fan base and being an enthusiastic member of it certainly helps, because you want them to come out and feel like their intelligence has been respected by the story, and they’re not going to have to sit there and suspend common sense. 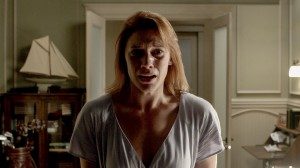 It was more the second. . . While working on the short it wasn’t like this could seed a feature. It was more about how can we make an awesome short. . . The priority at the time was not beyond completing that little movie, and getting it out there to what we knew would be a limited audience, because finding a home for short films is really hard. It’s going to be a tiny drop in a pond, but we’d like it to be a cool one. That film found a very small audience on the festival circuit that was passionate about it, but one of the coolest facets of what’s happened with the feature for me is that it looks like the short will be included on the DVD when the feature is released. The idea of that little movie getting out there to such a big audience is really awesome.

Oculus is out in theaters April 11th.