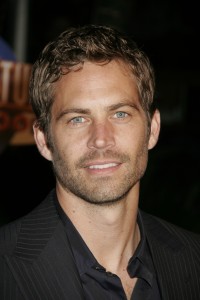 Paul Walker played Nolan who just lost his wife but has a baby daughter who needs special help in Hours. Nolan must do everything he can to save his daughter as Hurricane Katrina hits the city where the hospital is located. The late Walker, who suffered the same tragic fate of some other handsome actors before him, had been having a hard time proving his acting talent. But finally he did show he had some great skills in one of his last films ironically.

Nolan struggled with being a parent during those first moments and then he became the best protector of his daughter. Like his character, Walker also had a daughter. What was it like when she was born? He gave me his honest answer: 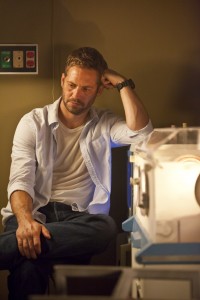 “It was tough. The mom and I weren’t going to be together and I was raised Mormon, went to a Christian high school, and I was told mommy and daddy were supposed to be together. And it was a hard one for me. I was so conflicted. And my dad saw it. I was always one of those ones like you get married and it’s forever and all those things. So it wasn’t like, ‘Oh this is the right thing to do.’ I was thinking where I was at. I was into chicks and having fun and I was sleeping with her friends for crying out loud. You know what I mean? I was an animal. And so I want to be there. My heart wants to be in it but the mind just isn’t following it. It was tough. So I felt guilt. So I’d come around and do what I could do. What let me off the hook a lot emotionally I think was knowing that at least I was providing financially. But emotionally I wasn’t there yet because I didn’t even know who the hell I was. And I think that’s what it is. When you have kids young, that’s part of the game. It sounds cool and all, but you look back and it’s like you thought you knew yourself but you just didn’t. And I’m grateful that I had her at 25 and not 20 because at 40 and 15, we’re matching up sweet. It’s just working, it’s so perfect. If I had her at 20, I’d be screwed. She’d be out of the house, and I’d be like, ‘Baby! I thought I had this shit figured out!’ So it’s working out pretty well. She’s lived with her mom her whole life and she wants to see what dudes are about and what’s going on. She wants a relationship with her pops and it’s working out really well right now.”

His 15-year-old daughter moved to live with him last year from Hawaii. Walker was able to take her to a screening of Hours and had a great time because he was very proud of this film. 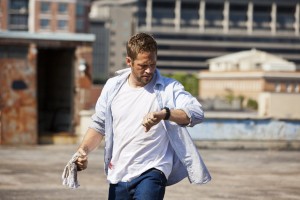 “First time I saw it, I took her. It was cool to watch the reaction because I’m proud of the work that I did because I told the truth the whole time. There were only a couple of times where there was a take and I didn’t believe it and I would say to Eric (Heisserer, director/writer), ‘I didn’t like that one. I didn’t believe it. I was trying to force something. I was just saying words.’ I remember I was talking with my agent Theresa and she’s like, ‘So how’s it going?’ And I’m like, ‘It’s going really well.’ I’m probably about halfway through it and she’s like, ‘What’s the experience like?’ I was like, ‘I don’t know. I think it’s good. I’m telling the truth the whole time.’ I realized as I told her it was kind of scary too. I was like, ‘You know, if people don’t like my performance in this, they just don’t like me because I’m putting it all on the line. It’s who I am.’ So at the end of it, for some people to respond to it, I’m like, ‘Whew, thank God. [LAUGHS] I guess I’m okay.’”

He was very proud of his daughter, and he could not stop talking about her.

“She just has a good sensor. I’m just fortunate, she was just born a good kid. She’s like laser focused with school. She wants to go to Columbia University so she’s like, ‘Dad, I gotta join Youth and Government at the YMCA because it looks really good on your college transcripts.’ I’m like, ‘Wow! Are you my kid? I thought you were mine! Maybe we should go do that DNA test!’ She gets that from her mom. She’s just laser focused and just wants to achieve and do really well. One week she wants to study environmental law and then the next week she wants to go to fashion school. She’s definitely got her mom and I in her. I hope she does environmental law. It’s so cute when she broke it down to me, her logic for it. She goes, ‘You know, dad, I want to go into environmental law.’ Just out of nowhere, we were in the car, she looks at me, she’s like, ‘I love animals and I like people. But I want to help people from themselves.’ I was like, ‘Wow. That logic!’ So we’ll see. I always thought she’d be my little Edie Brickell meets Sarah McLachlan. No, she’s going the other way. I was stuffing guitars in her face when she was a little kid.”

Paul Walker’s passing is very sad for many reasons and also because this film could have been a new chapter of his acting career. He was too young. I still can’t believe it since I just spoke to him for this interview a couple of weeks ago… R.I.P. Paul.