“Secret in Their Eyes” star Julia Roberts says, “I don’t think I had felt so happy on a birthday in quite a long while” 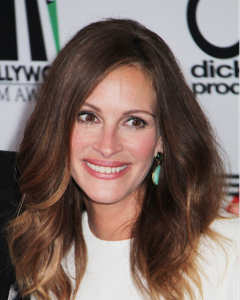 I did not recognize her right away while I was watching Secret in Their Eyes. Julia Roberts transforms from a gorgeous movie star into Jess, the woman who hurts so much in the film. Also, she plays the same character 13 years later in the film. Since the film mixed flashbacks with the current scenes so often, we might be confused sometimes without her. For me, Julia was the guide to which year of the story was occurring on the screen. She did amazing work! She confessed her husband (who was the cinematographer for the film) helped very much in playing this role. And she even lost her mom while shooting the film (Feb. 2015), and she had a great birthday this year. 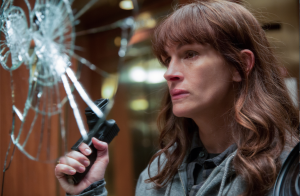 Q: How did you decide on the 2002 Jess and 13 years later?  This one is such a naked performance.

Well, it was interesting, and my husband (Daniel Moder) who was the cinematographer on this movie, he and I had a lot of conversations about this. I would figure out a little piece of the 13-years-later puzzle and that would sort of inform the earlier puzzle, and then that would get me another piece of this puzzle, and then I’d have to go back to this one. So it was kind of tricky and fascinating. And the best thing that he said to me about the whole thing was, at one point when I was starting to get super crazy with the 13 years later, he said, “Okay, but you have to remember when Chiwetel (Ejiofor, who plays Ray), when you walk into that office and he sees you, this is your really great friend who hasn’t seen you for 13 years, who went through this experience with you. He can’t worry that something else has happened to you. It can’t be a question of, what did I miss? It can’t be a question of, is she sick? It has to be a very clear line between what happened in that parking garage and who the person is walking through that office door.” And so that sort of took away a bunch of actor’s bullshit stuff [laughs] I wanted to do, and you just think, “Okay, how can I portray her as a shell of a person?” 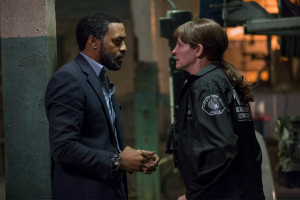 Q: What was it like to have your husband there supporting you through such a heavy role?

I mean, it was amazing. It’s so great. He’s my favorite person on the planet, so I love spending time with him and I love his work ethic. His point of view is really valuable to me, and it was great. It was really great. And also, when you feel like you do have scenes where you’re sort of really exposing yourself in a way that I wouldn’t do sitting here with you guys comfortably, but if he was sitting right behind me, and I felt like some sense of that security, it just makes you want to do more, really.

Q: You just had a birthday, what are your thoughts on being in this moment?

I don’t think I had felt so happy on a birthday in quite a long while, and I think part of it is just the happy space that I’m lucky enough to occupy in the world, and with my family, and my friends, and I played mahjong all day [laughs]. But also, you start to realize, what is the point in not being happy about anything? There’s no value to it. There’s no value to think, “Oh, my God, I’m 48, you know?”

Secret in Their Eyes opens in theaters November 20th.