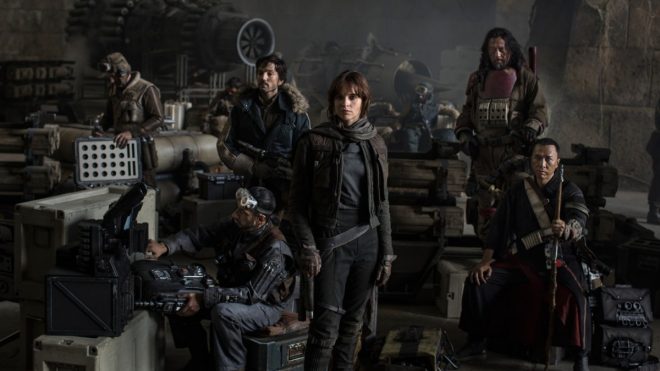 Star Wars: Rogue One is one snappy action movie and it follows the franchise faithfully. That’s all you need to know, right? It ends where Star Wars: A New Hope begins, and helps explain a few of the plot holes we never wondered about. Did they need to make an entire movie about a plot hole? I guess they did since there is literally a hole in the Death Star, but that is for you to decide.

I was hoping for something a little edgier myself, but Rogue One delivers a very Star Wars–ish experience and that seems to be what everybody wants.

There is no question that many of the scenes are visually stunning. The sheer number of artists working on it must have conscripted VFX worker bees around the world and the credits take forever. So, you will enjoy that. Every wide shot is fantastic and beautiful and the sheer scale of the settings is handled so well that it feels, sometimes, like it’s straight out a concept art book.

The action sequences are strong and entertaining too. Watching storm troopers explode, fall over, or be knocked out, just reminded me of how terrible these soldiers are at their job. It’s possible that they are the punching bag of the Empire, and the Rebels. They can’t catch a break. 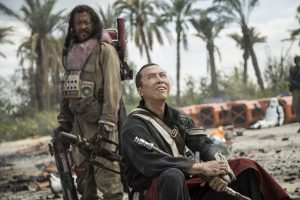 Donnie Yen ( Chirrut Îmwe) delivers one of the more interesting characters. He fights enemies with a staff and babbles nonstop about The Force, while having no control over it. In other words, much of the movie is fun and just plain silly. Rogue One had the option to go deeper but it stays on the surface.

Star Wars has been one of the very few successful Science Fiction franchises that has garnered devoted fans with its immersive universe. It also  easily attracts all ages. My feeling, however, is that this movie will only attract the younger generation, who may never have heard of Count Dooku. The most interesting characters play minor parts, and we are stuck with Cassian Andor (played by Diego Luna) and Jyn Erso (played by Felicity Jones) and personally, I could have done with less of them. 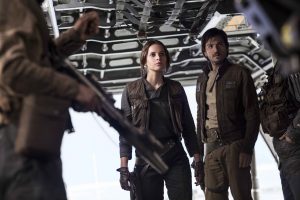 When we first meet Jyn (Jyn? What alphabet are these people using?), she is a child living on a farm, and her parents disappear due to Empire’s badness and the introduction of the villain Orson Krennic (played by Ben Mendelsohn). The story skips ahead here and fast forwards to an adult Jyn Erso, and the villain has a lot more grey hairs on his head. What follows is a lot of moody Jyn Erso and the chaotic misdeeds of Cassian Andor. When the two pair up, they argue nonstop. To be fair, the two characters have a dynamic that makes them similar and it is believable that they connect later in the movie. KS20 (played by Alan Tudyk) compliments the moody duo being a deadpan comic relief, and the rest of the supporting cast trickles in when they reach the ancient city of Jedha.

Jedha is a hotbed of rebellion and terrorism. This is where I started to get a little uncomfortable. In a vaguely Middle Eastern city, men in turbans or aliens shouting things in a foreign language, throw explosives at tanks, fire weapons at soldiers, and are pretty unlikable all around. The Star Wars series has always been a bit culturally insensitive, but this was a turning point where I started to realize how formulaic the movie was.

What bothered me next is really what sends a missile directly at the core of the movie. The filmmakers decided to explain the Death Star’s fault, and what powered it. Let me spoil what they use to power the Death Star: crystals. Magic Crystals, no less.

This is awfully reminiscent of when Lucas decided to explain the true nature of the Force as something to do with midi-chlorians. Why spoil the fun of trying to figure out why this gigantic space ball shoots planet-erasing lasers? Why explain so much in a universe where things are supposed to be mysterious? Ultimately, this is what I found disappointing about the film, just as I found The Force Awakens a bit predictable: I want to be intrigued, not beaten around the head.

So what makes a Star Wars movie what it is, other than lasers, an unrealistic number of habitable planets, and humans with British accents? Exactly that! The franchise is so easy to follow because there are consistent tropes that seem to ride along through every possible variation of the movie. That being said, the Death Star needs to go away forever. That’s up to Disney, but I don’t think any more movies need to spend time on the prone-to-exploding death orb. 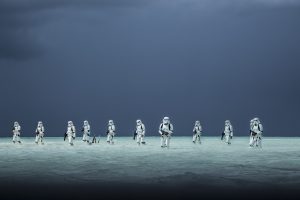 Star Wars: Rogue One will appease to mass audiences. It will be a fun experience for our friends and family. However, the movie lacks depth. The franchise itself has been continually trying to explain itself and introduce new characters to broaden the Star Wars universe. So maybe in another galaxy far, far away, a new Star Wars movie will break the trend of Hollywood formulas and really show us something inspiring. Until then we have the next Star Wars movie to look forward to and I hope it’s going to rock your socks off.