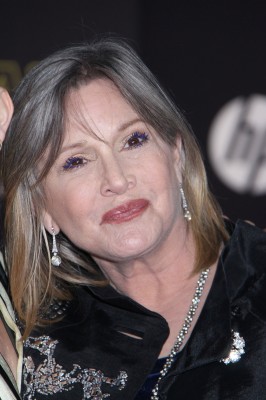 Princess Leia is back! She is again in girl power mode and dressed… as a classy gas station attendant? Oh Carrie Fisher, how we have missed you.

“She would have to. Wearing those hairpieces and you know, I do have now a baboon ass hairstyle. And I mean that with love. And so you need a sense of humor for that sort of thing. It keeps it lively and fun when you’re getting shot at and everything. No, it’s the hair that really makes you funny. Well, you should know that”. 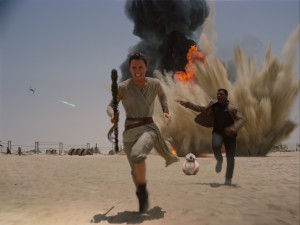 Q: Can you talk about bringing out the girl power in the original trilogy and also The Force Awakens?

“I am the beginning of girl power. Deal with it. No, I did. I got to be the only girl on the all boy set, which was really fun, you know, to put things in their drinks and stuff like that. We drank through the whole trilogy in the beginning. This was a sober set. So that’s what J.J. (Abrams, director) brought to this was sobriety. Girl power – she’s more powerful in the girl – yes, I’m louder than you (pointed Daisy Ridley), so she takes on the physical power and then I scream at them until they pass out. Not scream, I make fun of them. You know, that was what was really fun about doing anything that girl poweresque, is bossing men around. I know a lot of you women out there haven’t done that yet, and I encourage you to do so later this afternoon”.

Q: Could you talk about your costume in the film? How long did it take to get into?

“About 20 minutes. I have a kind of classy gas station attendant look. [laughs] That’s not funny. So that doesn’t take long to put on. Or I could say I was an airplane mechanics. Well, their nice vest over that. And different hair than most airplane mechanics would normally have. I don’t mean the baboon ass hair. It’s other end”.