Stephenie Meyer’s visit to “Austenland” was a dream come true

It was a dream for Stephenie Meyer to visit Austenland. The Twilight Saga author did not plan on being a writer or a Hollywood producer and she talked about her creative journey.

“As a child, I actually wanted to be a lawyer was the goal. I didn’t plan to be an author and then even less did I plan to produce movies. It all sort of has happened. But you get to use a lot of creativity and I need that. Before I started writing, I made very elaborate Halloween costumes and birthday cakes. I just needed some kind of creative outlet. Movies is a really interesting and collaborative one because when you’re writing books it’s just you alone in a room kind of quiet and dark and sad. On Austenland, it’s a little bit different. I got to hang out with ladies all day. That’s not generally how it is in the movies. And it was very social and kind of a community. I liked it a lot. It’s a different thing from being alone and writing.”

Austenland is the story about a woman who is obsessed with Jane Austen and decides to visit Austenland where Jane Austen’s world has been brought to life. Spending time in the English countryside, she learns some harsh realities about Austenland and also gets over her dream.

Just like many other women in English language countries, Stephenie has read Jane Austen and was greatly influenced by her. And she confesses she is a nerd!

“I hesitate to name Jane Austen and Charlotte Bronte and all of the greats because then people might think I’m denigrating their names a bit but I did love them. And I do think they influenced me just because I loved reading because of them. Getting to make Austenland I think is probably the closest any of us will have to being there. Getting to live in the English countryside and walk up to the manor house every day to film, it was a pretty amazing fantasy trip in and of itself. I love those stories. They resonate with me. I’m not sure why, maybe because I’m a nerd.” 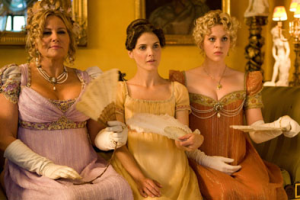