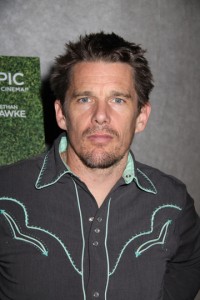 When I first heard about this film, I thought it might be super boring since it is just about a boy’s life over the course of 12 years. But, it is one of the best films I have seen lately. I can’t point out where and what is great but I just feel this is good. All I can say is my favorite scenes in this film. One of them is about sex education. Ethan Hawke plays a dad who tries to have a sex education talk with his daughter. Yes, the awkward feeling is there but the feeling is very real because they invested 12 years to shoot this film. Ethan talked about the benefit of spending 12 years shooting and his own experience with sex education for his real life daughter. 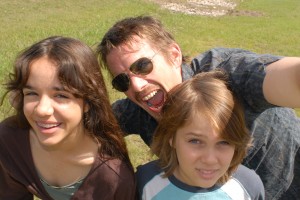 Q: The director, Richard Linklater, did not use different kids for each age and shoot the film in a couple months span… As actors what are the benefits of doing this project for 12 years?

Just so fun to tell a real story about a real family. I mean, so much of the problem with most movies is they create a false narrative, so that it has a beginning, middle and end that all takes place over six months. But our lives never feel like that. We have moments of grace, or moments when we feel something deeply but it is because of 90 million other things that happen before it, not just that moment. So I found it’s so enjoyable to tell a story without any lies in it like that. Time is so much a part of what makes you close to people. What is the expression? “You don’t make any new old friends.” Time is what creates trust. So we got to do that with each other, and we got to do that with the audience. The audience starts to believe these characters because they are watching them experience time with each other. 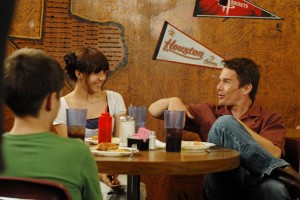 It’s amazing to me with how much we’re inundated with images of sexuality in every advertising tool that’s used and how much we’re just inundated with that and how hard it is for us to talk about it. In actuality, I think it’s funny, Lorelei and I have known each other since she was a little girl and a lot of our feelings of awkwardness in that scene are we’re both acting and both not acting. I found in my experiences as a father, you know, I’m an actor, I’m a Bohemian person. I struggle with especially cross gender. I don’t know why. In a way it’s easier with young men to make jokes about it. But I love how your character gets up to go to the bathroom and it’s kind of clear that my character doesn’t want you to leave. I need somebody around to talk to. If I recall in the shooting script of that I even made some slightly off color remarks that didn’t make the final cut. It’s such a fine line of how to speak to a young person about sexuality. We as parents don’t have a rule book about how to do that. I remember myself just being absolutely petrified and I put a human sex ed book in my daughter’s room. I just left it in there. It had pictures and diagrams and stuff like that. I just dropped it in there. 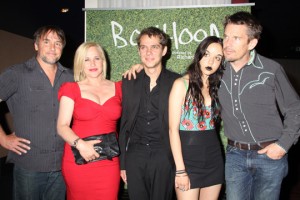 Q: Then what happened next? Did she toss it out the door or did she leave it in front of your door?

See for me, the problem with it – it’s easy to make jokes about it – but the problem is teenage pregnancy is extremely real and a lot of young people kind of don’t understand that their bodies actually do work and it will impact their whole lives. I know that my father feels very much the way that the character in the movie feels about it. He didn’t put himself in the very best situation to parent me in a way that his own personal ethics and responsibilities… he just put himself in a disadvantaged position. And in answer to your question, I have a 16-year-old daughter now and I’m sworn I’m not allowed to speak to you guys about her, sorry. I cannot answer that question.