“The Good Dinosaur” voice star Anna Paquin says about script security, “If somebody steals your backpack today, you are screwed” 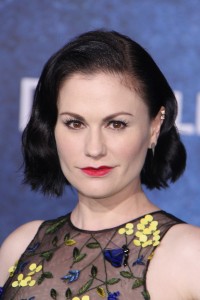 From mutant superheroine to star of a vampire show and now a dinosaur, Anna Paquin is enjoying meeting the dinosaur toy which is based on her character, Ramsey, in The Good Dinosaur. When she entered the room for the interview, she was holding the toy. And during the interview, she was playing with it! Yes, I asked her thoughts about her alter ego toy and mommy opinions!

Q: What do you think of the toy which is based on the character you did the voice for?

I think she is awesome.

Q: Is this your first toy based on a character you played?

I’ve had a quite a few, but no dinosaurs, but an assortment of comic book (talking about X-Men) related, vampire show (talking about True Blood) related and assorted other genre types. I will (have) a stock of things, if life really takes a turn, I can sell on eBay at some point because it’s from their original packages [laughs].

Q: Were you working on your series during these recordings?

No, that was over. When I met them all at Pixar, we were still shooting, and then didn’t record until a good ways after we were done. I remember because I had green hair at the time, and I know I definitely didn’t have green hair when we were shooting True Blood. So I was on my extended vacation/delayed maternity leave where I dyed my hair whatever color I want [laughs] because I am actually 12 years old.

Q: Being a mom, is this something kind of cool that your daughter and boy can see?

Yeah! And I don’t have to wait till they are 18 or (say), “Oh my God, never! I don’t want to watch my parents doing that.” [Laughs] For starters, I would literally do anything that Pixar wanted me to do. I love their films. I am not a huge animation geek or fan. Some I like. But I find the emotional stories and character development to be every bit on point as I do when I’m watching a live action film. And that to me is what Pixar has managed to do so beautifully with all of their films actually is really tap into the thing that makes you sit in the movie theater and weep — which generally animation doesn’t, except for when Mufasa (the father in The Lion King) dies. [Laughs] That I cry every time. 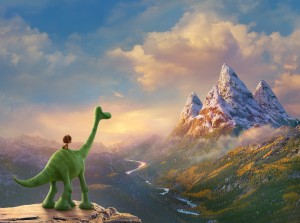 Q: Will you bring your kids to the theater to see this film?

They can’t see it just yet. They are three. They are pretty sensitive. But also they have never seen anything on a big screen, so I feel like if you are watching it on an iPad, maybe not so scary. But having this huge and beautifully intense and perfectly executed, quite sophisticated story… But there is nothing inappropriate, it’s just really emotionally intense in a lot of places.

Q: How was the Pixar experience?

Oh my God. I desperately wish I had some talent as far as graphic design or computer something or other or drawing — anything vaguely that might mean I can get a job at Pixar. Like in my next life. Their office/cubicles/speakeasy/bunker, they literally get to design each of their own little spaces and they have a budget to do so. They are a fully executed stage. There was this World War II bunker thing that an airplane crashed into with smoke. I was like, how could I work with somebody who not only takes creativity to be actually a meaningful and real thing but who is going to go out of their way to put the people who are creating their product in an environment that they find stimulating? It’s just so exciting and sort of inspiring. I just didn’t want to leave.

The Good Dinosaur opens in theaters on November 25th.