“The Nice Guys” smoking hot star, Ryan Gosling talks fatherhood, exercise, and what motivated him to aim for the top 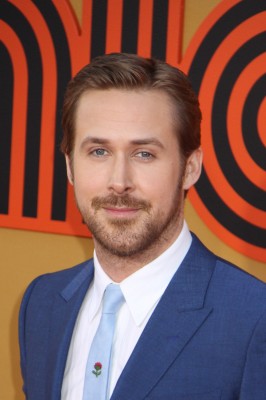 As soon as Ryan Gosling entered the room, he seemed tired (not that any woman in room minded), what we didn’t know at the time was he and his girlfriend of five years, Eva Mendes, just welcomed baby number two.

In The Nice Guys, Gosling’s character has a daughter and he chain smokes like a locomotive in front of her. Ryan who was a smoker in his real life has said he actually quit smoking after the filming.  Find out what made him finally break the habit and how he did it. Also Ryan shares Russell Crowe’s unique daily habit, parenthood, his experience as a Canadian immigrant in Hollywood seeking work, and Blade Runner! 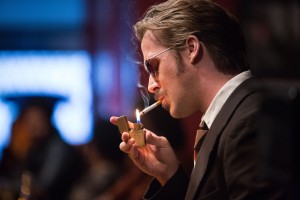 Q: You had a constant cloud of smoke above you in this film, were you actually smoking real cigarettes?

Yeah, yeah, yeah. I actually never want to smoke a cigarette again. It’s the best way to quit. Just do a film where you have to smoke.

Q: This movie has a great balance of comedy and serious drama. Was that difficult making the transition within the same film or was it fun for you?

It was fun, you know. We all know Shane’s  (Black. Writer, director) work, and so there’s an inherent understanding of kinda what we’re here to do when we walk into it. I think for me, when I read it, I read it as an opportunity to do a lot of physical comedy that wasn’t necessarily written, but it felt like it was teed up to involve that. And so I wasn’t sure how that was going to fly when we got there but Russell (Crowe, played Healy) was really, I mean Shane was of course as well, but 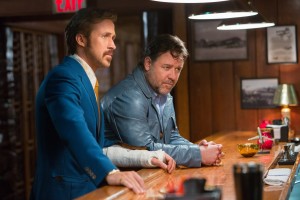 Russell was really supportive. I remember the first day I went to set, I think it was one of our first scenes, where it was the bathroom stall scene. And I wanted to do this thing with the bathroom door and I went to set early and I was practicing and trying to figure out how to make it work. And I just smelt smoke and I looked behind the door and Russell was smoking, watching me. And he was very seriously saying, you know, I think if you hit it with a different leg it will bounce back better and we were immediately having a very serious conversation about the dumbest thing ever. And I knew it was gonna be fun, you know. He was such a champion of me doing, taking it, to as extreme of a place that I can take it.

Q: What was the most surprising thing you found out about working with Russell Crowe?

That he bikes everywhere he goes. Yeah, it’s kind of tough actually. Because we would get to set, and I would just be. You know Russell would have 30 miles under his belt and I am just halfway through a donut.

I don’t know, he’s just a very active guy. We started moving locations closer to his hotel just because we had to factor in Russell’s travel time. 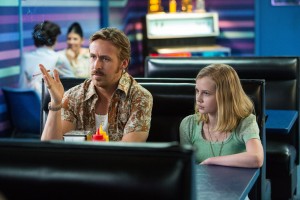 Q: How about the language? The girl who played your daughter was thirteen at the time you shot the film and she said you were a bit hesitant about the use of profanity around her.

I was more nervous about it than she was.

Q: This is your first role playing a father after you became father in real life. How has tht changed your mindset ?

It changes it for the better, your life becomes better than you ever thought it could be.

Q: Do you find that you worry more or that you are getting more protective?

Getting more? Sure, yeah, everything is a potential danger. Ten heart attacks a day.

Q: You did a lot of action sequences in this film and in some pretty tight pants, how was that experience?

It hurt. It was very, uh, you know, I think the last sequence, that kind of almost Harold Lloyd kind of like ending, with the character as he chases this film can falling off of buildings and through glass, through plate glass windows and through ceilings, and chasing mermaids, and you know it was, it took like, I think 3 or 4 days to shoot. But it was really fun for me because I grew up on slapstick films not that this is slapstick but there is an element of that in it. So for me it was an opportunity to finally make something like the films I have grown up on. 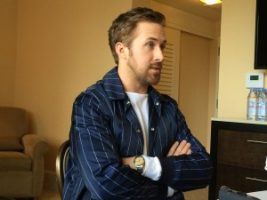 Q: You have quite a few films that are set in Los Angeles. How does it feel, not being from here but now representing LA, in many ways?

Because I am not from here, I have a bit of an outsiders perspective. Although most people I know are not from here. You know I grew up hearing about LA and Hollywood and dreaming of coming here and working here. So for me, there’s so many facets to Los Angeles that I am always excited when I get an opportunity to explore a different one. Whether it’s from the diversion of Los Angeles when you are driving at night, which we tried to capture in Drive, or the romantic old, the history of Los Angeles which we tried to capture in La La Land, or in this film, or Gangster Squad. I love this city and I wish we could shoot in it more. Unfortunately it was a little difficult. We could shoot here for a week. Atlanta, it was cold, but they were very warm. 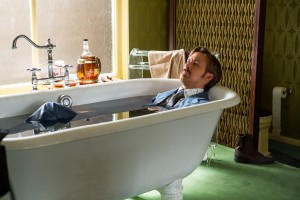 Q: As an immigrant from Canada, do you feel an affinity to other immigrant communities. Communities that might be affected in the next few months by a certain someone possibly getting into office?

[laughs] Oh boy… No I spent a lot of time trying to work here and not having a permit, so it was hard for a long time before I finally got a green card. And even more difficult because people wouldn’t hire you for smaller roles because it wasn’t worth it for them to pay for your permit. In a way it helped because you could only audition for big roles. Because those were the only roles that if you got them, people would pay for your permit. So it kind of forced me to aim high. 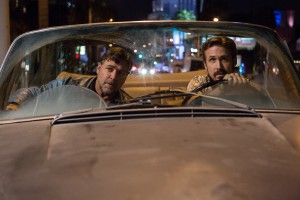 Q: What can you say about Blade Runner before you leave?

Well there’s a sniper on that roof. If I say anything someone will shoot me [laughs].

Q: You have got to be excited to be a part of such an epic project? 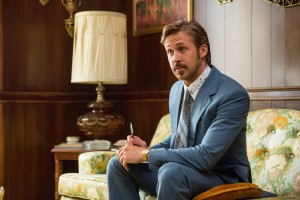 Q: So will it be set in LA, like the first one?

It’s gonna be in Budapest

Q:  Will you still reside in LA in the future?

The Nice Guys opens theaters on May 20th.