The Untold Romantic Comedy: “I Give It a Year” Trailer 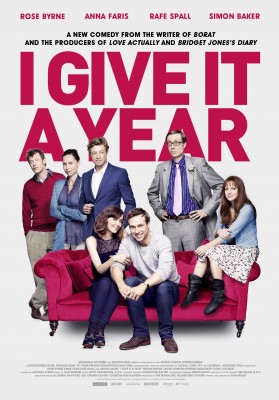 Ever ask, “What happens after the romantic comedy ends?” Do he and she live perfectly and happily ever after? It is the story that is not usually told, at least for romantic comedies. The lovely couple in question in I Give It a Year, played by Rose Byrne and Rafe Spall, is having some trouble, but this is after their dream-come-true courtship and marriage.

I Give It a Year is tagged as the film, “Starting where other romantic comedies finish.” The romantic spark has dimmed and the once improbable couple seemingly is facing some relationship problems.

From the screenwriter of Borat and Brüno, there are sure to be plenty of laughs. How vulgar will all the humor be? Written and directed by Dan Mazer, this is likely less of the Kazakhstani humor we are familiar with from his previous screenplay.

I Give It a Year will be available on iTunes/On Demand July 3, and in theaters on August 9th, 2013.