Tracy Letts on his uncompromising performance in “Christine”: “I felt like the dramaturgy was on the page.” 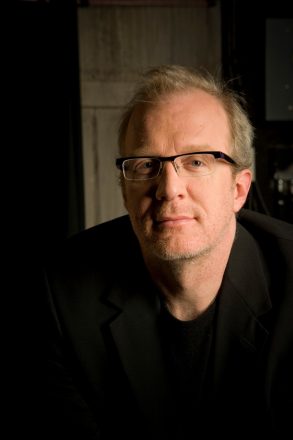 Tracy Letts has bounced between award winning playwright and actor and this time around he steps into the role of the demanding boss to Christine Chubbuck in the film Christine, which is based on the actual events of a TV reporter  who commits suicide on the air. While Tracy admits he did no research for the role, he gives an award winning performance.

Letts shares his childhood memories of the events that the film is based on as well as  his thoughts on journalism during the 1970’s. 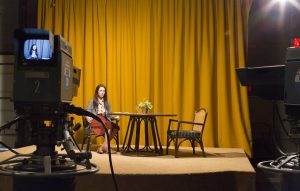 Q: This is a really heavy role, was your  research difficult especially since the man you portrayed in the film has since passed away?

I’m afraid I disappoint everybody when I get asked this question, because I didn’t do any research. I’m not a research guy. Antonio (Campos, director) wanted me to come down to Savannah to this abandoned television studio that they filled with: an antiquated TV equipment. Antonio wanted me to come down and learn to use the equipment. I said, “Why would I do that? Are you gonna show me using this equipment? I don’t use the equipment.” So I walked on doing that. I just felt like the dramaturgy was on the page. There was no research necessary. Like you said it was not just based on one guy. It was an amalgam of people who were at the station and had past away. I felt that the person who had to concern themselves with this was Rebecca (Hall, star) playing the part she played. I got the contours of my character. What my function in the story was without any of that stuff. Also I was alive in 1974, I was a kid, but I was alive [laughs]. I remember the colors we all wore, [laughs] the terrible orange colors. 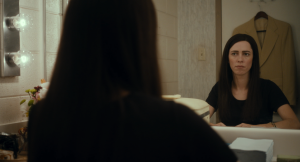 Q: How familiar are you with the story of Christine Chubback?

I knew it; again I was alive when it happened even though I was a kid. I don’t necessarily remember it, but I’ve known it. It’s in there somewhere, but just the two or three sentence version, the Wikipedia version of it. I was certainly surprised there was enough material to make a movie about her. I thought Craig’s (Shilowich, writer) script was really beautifully rendered. It’s rare to find original screenplays that are nonfiction. Spotlight was another example of that for me where, “wow, these screenwriters actually went to the place and interviewed the writers based on their interviews with these guys.” Craig did that with the help of Antonio in Sarasota and spent some time with the people who had known Christine or worked at the station. I felt that they had crafted a story that went deeper than the tabloid headlines of that Wikipedia version. I was impressed not only with how cohesive, well-written, and articulate it was, but how compassionate it was. There was a real heart there. There was a real kindness towards this character. I wouldn’t have been interested had it not shown that. I felt that there was a real genuine sympathy for this woman and her problems that caused her to create this very violent act. 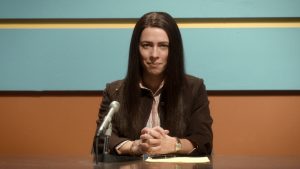 Q: Do you happen to remember this story making headlines and staying in the news or did it pass quickly because it was too much for the public to absorb, especially with no footage like what would be released in today’s media world?

I’m not gonna pretend to remember more than I do, but from my understanding it passed very quickly. I think probably one of the reasons for that was there was no tape. My understanding is that one of the networks called this independently owned affiliate. My character actually owned this affiliate. He was not just the manager, but the owner of this affiliate. They called him and offered him a substantial amount of money for the footage and he declined even though he was in financial trouble. He showed some heart himself, declined that, and sealed it in the vault where it remains to this day. I’ve heard rumors that it was given to the family, but there’s some recent reporting that suggests that the man’s wife still lives with the information that it’s in a vault. She has no plans to release it or give it to anybody. Maybe someday somebody’s gonna come across this footage and put it out there, but I really hope not. I think that’s probably why it passed very quickly with the public’s imagination. There was no way to keep it alive without that footage. There’s also this business about Chayefsky and Network that Paddy Chayefsky had based Network on this incident. Howard Beale says he’s gonna blow his brains out on the air. I guess there’s some research that shows that that’s not true. In fact Chayefsky had a line in an early draft that referred to Christine Chubbuck that was then later cut from the film. 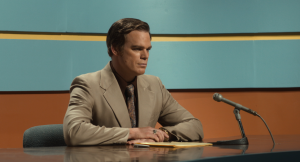 Q: I was a broadcaster in Japan and went through a similar experience Christine had. Everyone is looking for shocking juicy stories especially now with the news online and in social media. It is one insatiable beast. That being said, how do you see journalist today still keeping their journalistic integrity while meeting the constantly changing deadlines with headlines?

Everything you say is true; it’s all true out there. I think we can always as storytellers, appeal to peoples more base instincts but I think there’s always a way to elevate the conversation. Maybe talk about higher ideas. I think that’s our responsibility. I would also argue that that’s the responsibility of journalism, to discuss things in terms of more high-mindedness. Somebody actually has to make a personal stand. Somebody in a place of importance has to take a personal stand and say, “yeah I know that sells tickets, I know that elevates ratings. I’m not in that business. I’m in the business of news. I’m in the business of not only delivering the events of the day, but putting them in some context: Political, social, historical context.” Ultimately it comes down to the individual. In the 1970’s when the story takes place, both of affiliates, the power of the individual networks. The money suddenly goes through the roof, so the stakes were even bigger in the 1970’s. There’s a very real thing for people to talk about, “if it bleeds it leads. Let’s get something on television to get them to watch.” That’s been the case for a long time. It was even the case with kids getting lost in wells or trapped in mines. There’s a tradition of that as journalism goes back a long way.

Q: You won the 2008 Pulitzer prize for drama in your play August: Osage County and you have been nominated and won other prizes. What’s the secret to screenwriting and finding a subject for your writing?

That’s a good question. The first thing I tell any writer who comes to me is “self-produce.” Just produce your own stuff, don’t wait for anyone to tell you how to do it. In this day and age, that applies to film as well as theater. You can always just do your own stuff. You can grabs your phone and make your movie. There’s no excuse to not make your own work. As far as how you choose your subjects, I think that just comes with time, age, and taste. Determine what it is you want to talk about, and do you have anything to say? I’ve started any number of projects as a writer on my own, and I think, “Oh that’s a good interesting idea.” Then I get into it a little bit and realize, I have nothing to say about this, I’ve got nothing to offer. Other people have said this better. There’s no point in me just piling on to an old conversation. Probably why I’m not more prolific than I am and I think I’ve written 8 plays in that time. It’s only when I feel like I’ve got something to say, that I say it. Trial and error is the best way to learn how to do any of this, so self-producing is the way to get to trial and error. Put something up, either on a little stage somewhere or shoot something. If it’s terrible, the next time you go to write something, you’ll start to be able to weed some things out. Say, “I’m not going to make a movie about this, I’m not going to write a play about this, because I don’t think I’m going to be good at that kind of story.” Also I have to say that as an actor, what I look for in a script is just a personal vision; anybody’s personal point of view. This business gets so – people complain about it now, but it was ever thus. People complain about comic book movies, but there’s always been some version of that. It’s impersonal, so it doesn’t move me. I don’t have traffic in that, but there’s a big audience, so it takes care of itself. In terms of the films I’m doing, I just feel what I’m doing is a personal statement by the filmmaker. Somebody behind it is saying something personal. As an artist, that’s all I care about. I don’t even care if it’s good. I don’t care if it’s good or not, I just care if it’s personal.

Q: Do you decide, “This year I’m going to write,” or bit by bit and then put it together?