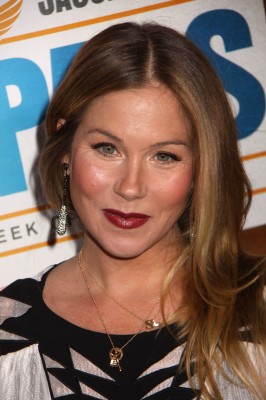 Be aware! Talented comedy actress Christina Applegate is back! After her one and a half years off, Vacation is the one that brought her back to the silver screen. Yes, she is funny and brave! There is no hesitation to get dirty. In the film, her character Debbie convinces herself to agree with her husband Rusty’s dream vacation… which is not her favorite idea. What is Christina’s favorite vacation? And she also reveals she now has a decision maker who is not her and chats about her life as a mother. Also she talks about her co-stars, Chris “Thor” Hemsworth and a secret cameo actor from a hit TV show (spoiler alert! If you don’t want to know, don’t read the last question)! 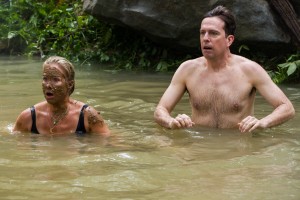 Q: What is your favorite vacation?

CA: Oh gosh. My husband and I went on one before we had our daughter. So it will never look like that again [laughs]. Sadly, but… it was great. It was Paris, and then a train to Amsterdam to see family and then a train down to Italy. We’ve gone to Spain and Barcelona. I love Europe, so that’s a big one for me. But really my favorite vacation is where I can just lay down and have people bring me things [laughs]. He’s always like, “Let’s rent a house,” and I’m like, “That requires cleaning dishes, man. I got to cook our own food, man. Let’s get a villa with a staff and lay there.” [laughs] 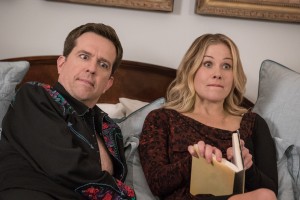 Q: In this movie, Rusty (Ed Helms’ character) sacrifices his career to spend more time with his family. How about yourself—do you do that?

I have someone who’s number one now and she makes all of my decisions. Not Sadie (Christina’s daughter, who is four and a half) herself. She doesn’t say, “You can’t go and do that.” It’s not a sacrifice. It’s what I want to do. I want to be home with my daughter so I don’t work very much anymore on purpose. After Anchorman 2: The Legend Continues, I said to them, “I’m taking a year and a half off. That’s it.” So this is the only other job that I did since doing Anchorman. It’s been almost a year since I’ve worked again. That’s how I like to roll. That’s how I like to be. It’s always great being a mom. At 6:45 a.m. or 6:15 a.m., she comes in and says to me, “I found this feather.” I’m like, “Really? You can’t give me until 7 a.m. to start breakfast, to start my hour and a half with you, which is like the craziest hour and a half of my whole day, to get you fed, get you dressed, get your teeth brushed, get the sunscreen on you, pack your snack, get your things?” You know.

Q: Do you see her going into the business?

She can do whatever she wants as long as she is 18. If she wants to be an actress, she has to study. That’s my thing. If you want to be a dancer, then study. You don’t get to just “be” in the business. You’d better be good at what you’re doing. For me, that’s what I want to uphold, and then when she becomes 18, she can go make a living doing it. Until then, no. 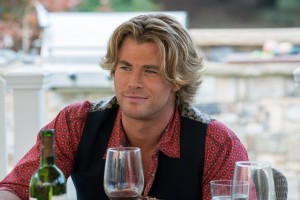 Q: How was working with Chris “Thor” Hemsworth?

Chris was amazing. I hate to say it because I don’t like it when people say they’re shocked by (something different that someone does). Like, “I didn’t know you could walk and chew gum at the same time, because you played that dumb girl for 11 years.” Like, “I can’t believe you can spell cat.” So I don’t like to say (that I was surprised) about him. I wasn’t familiar with him because I hadn’t seen Thor and things. I’d only seen a picture of him as Thor. So I didn’t know what to expect. God, he was so fantastic, so funny. 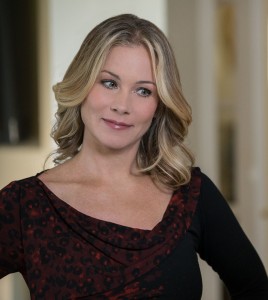 Q: And what about the surprising cameo actor?

I have known the actor for 23 years. That is why the actor’s in the movie ‘cause we were hanging out together in Atlanta. It was a hard time casting (that role). Who’s going to be the perfect person? And my husband was like, “Why not him? He lives here. He’s already here?” And, spoiler alert, he was like, “Yeah, I want to do that!” And the directors were like, “Yeah.” And I was like, “Yeah, guys.” That’s the biggest show that has ever happened. That is the moment. “This is going to be a moment in this movie.”