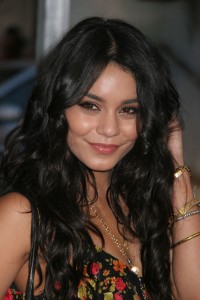 Vanessa Hudgens not only dedicated her long, beautiful hair but also much of her energy — more so than for any other film — for Gimme Shelter. 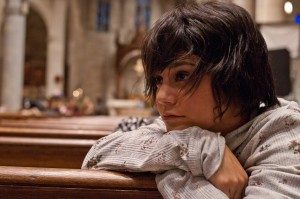 Based on a true story, it is the journey of Apple who escapes her abusive mother, to become a homeless teenager who is pregnant and searching for family. Hudgens very realistically portrays Apple as she is quite dirty and very ill-mannered in this film. Also, she cut her own hair in the beginning of Gimme Shelter while the camera was rolling.

Since it is such an emotional character, did Hudgens have a hard time switching off at the end of the day?

“While I was doing it, I thought that I was definitely turning it on and off, but as soon as we wrapped, I realized that it had been on the entire time because then I only knew my character and I didn’t know how to be myself. That’s when I realized that I had stayed in it for so long. I was riding on a total high when I was doing this movie because every day was so thrilling and to be able to do the scenes that we did was an amazing, accomplished feeling. I don’t think I was aware of how in it I was until afterwards.”

This story is so foreign to me because I don’t have any friends who are homeless or are teenage moms. How about Hudgens? Was this unknown territory to her as well? 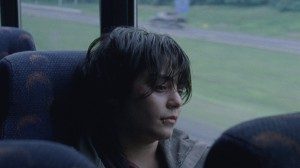 “I feel like I grew up in a pretty sheltered life for the most part. I don’t think I’d ever been around mothers that young before so that was definitely an eye opener for me. But I had had a friend who had ran away from home and was homeless when she was 16. I had had my fair share of dodgy situations so that front isn’t necessarily that foreign. But I mean, it’s not foreign. You walk down the street and there’s a homeless person. It’s everywhere around us. It’s just something that’s easy to turn a blind eye to and that’s why this story is so important because it opens our eyes up to the world around us.”

Apple gives birth toward the end of this film and Hudgens, playing the mother, held the baby. Did that experience change her perspective? 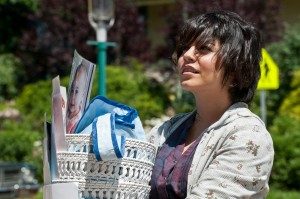 “No, I think that I’ve always just appreciated the beauty that is childbirth and being a mother is something that us women have been born into existence to do. I’ve always felt I’ve had maternal instincts as all females do. It’s something that’s ingrained inside of you ever since you’re young playing with Barbies and have a little baby doll. I think it’s such a miracle and so beautiful. I always have though.”

She enjoyed working with the baby, but did she change any diapers? The answer was “No, no, no.”