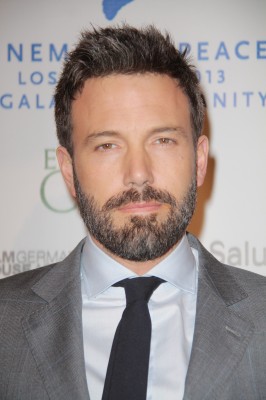 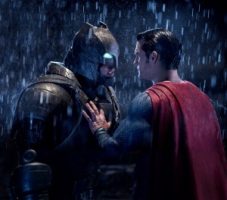 Q: What was your immediate reaction when you first heard the title of this film? It is not Superman v Batman, it is Batman v Superman.

The Dark Knight Returns was something that obviously had that precedent before, the Frank Miller books, so having seen that I was already tuned in to what it could be and hoping that that was the sort of angle that Zack (Snyder. Director) was taking. He had the little sculpture of that in his office and I thought, “This guys is definitely on the right track.”

I read it, when I was a kid, “The Dark Knight Returns”. His comic where Superman fought Batman and it was really original and interesting and it turned the genre on its head. It was a morally grey sort of story. It changed the way I saw comic books. I had been familiar with that idea for a long time, so when I heard that this was the idea of this movie I thought, “That’s brilliant,” because it’s one of the greatest ideas in comics that hasn’t been mind yet for films. 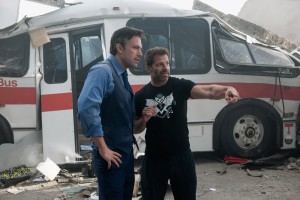 Q: How much pressure and responsibility did you feel in accepting the role of Batman?

For me, there was really enough material in the screen play that Chris (Terrio, writer) wrote and with Zack’s direction there was plenty for me to grab onto and to use my imagination to build this character. It’s certainly daunting because of the people who’ve played this character before and the great filmmakers, you know, — most recently obviously Christian Bale who’s made 3 brilliant movies, all the guys that went before them–there’s that element of healthy respect you have for the project, the history and it raises the bar, certainly. I thought I was in really good hands with this script and Zack, that’s was were I focused my attention.

Q: Growing up in Boston, how were you first introduced to the Batman comics?

There’s a store in Mt. Auburn street called The Million Year Picnic, which is still open, which is where I bought the Frank Miller book when I was, I don’t know, I wasn’t 5. I was old enough to be wondering around the city by myself apparently. [laughs] That store is still there. That’s where I bought my first comics and that was the first comic that really took my appreciation of this genre to another level. It was right when people were kind-of doing those innovating in that way, newer, more adult, sophisticated, complicated ways of looking at this world started to become a genre. It took the movie business 20 years to catch up, to be willing to mind these stories for complicated and interesting stories, but it has now. 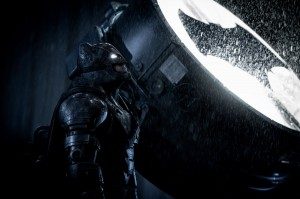 Q: About the duality of the character, what did you like most about your Bruce Wayne / Batman character?

Bruce Wayne, Zack often said that he thought Bruce Wayne was like a mask character that he put on as much as Batman was. He liked the idea that there was this ritual, just putting on the suit and getting ready. The way he looked was a way of putting a mask to the world and presenting this alter-ego person, Bruce Wayne, to the world. I thought that was interesting and I like the idea that both Bruce Wayne and Batman were bucked-up unhealthy people who were engaging in unhealthy behavior at night as a result of psychological scars they borne from childhood. I thought that duality was something very interesting to explore. 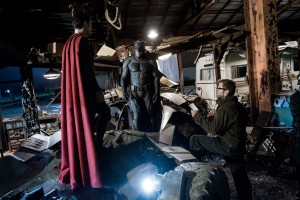 Q: Is it true that you turned down the offer to direct the movie Man of Steel?

It’s not true that I turned down Man of Steel. I learned a lot from Zack, on this movie. Aside from the personal experience of playing the part was watching a guy who really understands how to make films in this level with cutting edge technology, combining camera stuff with visual effects and stunts, practical effects, and all the tools at a directors disposal, and seeing how Zack sort-of meticulously constructed them using, literally, hand-drawn story board, frame by frame, evolving those into the movie that you saw, fairly consistent vision. I wondered about directing movies like this before and it was really a very valuable learning experience for me to watch Zack do it and see how he did it so that if that day did come I definitely pick up a lot of valuable information and tricks. Sure, for me, as a director, it’s about material and the characters. So if I found the right material, I would definitely throw my hat in the ring to direct something on that skill. I’m definitely more bold now, certainly having learned and watched Zack and Chris (Terrio) put this movie together. 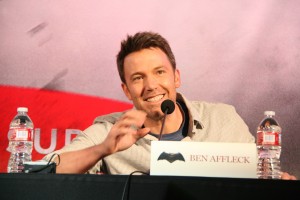 Q: What would you say allows you to lose yourself into your character deeper, you’re little boy-hero complex or you’re adult-hero complex?

I have too many complexes to sort through. Any of them will do, really. [laughs] I think one of the reasons this character has resonated since the FDR administration with the audiences, regardless of the way the country has change and pop-culture has changed, is because you have a guy who on the one hand is powerful and exciting and can do thing that we all wish we could do, but is still a human being and struggling with his own vulnerabilities, fragilities and struggling with his own will and accomplishes things by force of will. That was fun and exciting to play. To equal measures of my adult geekiness and kid excitement for this movie, you can just see from this room, everyday there was something to geek-out about and be excited by and be like, “I can’t believe I get to be in this movie.” It was exciting every day.