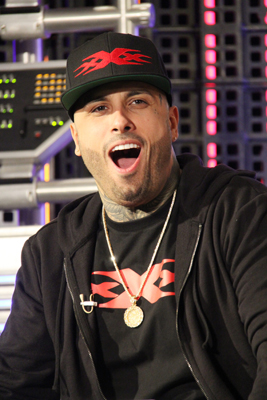 Just as the press conference started to wrap up, Nicky breaks into a , well…jam session going a cappella singing El Monte in the end of the press conference (which we have video of below).  If that wasn’t enough Vin and the infamous Ruby Rose provide chair dancing on backups…You’re welcome.

We chat with Nicky to talk about his inaugural feature film role. 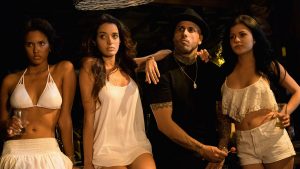 Q: Congrats on your first film. What would you say, you enjoyed most?

I was very nervous [laughs], because I was doing my first scene with Vin Diesel and oh my God.  He made it very easy for me. He was very humble about everything and everybody in the cast made it easy for me and was so nice to me. Lazarus (Nicky’s character) is somebody we (always) had in the hood, so it was very easy for me to play that character. We had a lot of Lazarus back home in Puerto Rico. In a way, I identify myself with Lazarus, so it went well. I think I’m Lazarus myself and he had a lot of girls next to him.

Q: I hear Vin is going to record a song with you in the near future, with all of those beautiful women on your video set that Vin will now be apart of, does that lower your number in the lineup?

You know, I thought I wasn’t going to get any questions asked (in this press conference).

Vin Diesel inserted “They got you man!”

See, when I do stuff with Vin, it’s kind of top secret. I can’t talk about music. We are working on something. We’re having fun.

And Vin again “I’ve got to say the bromance is real because my daughter Pauline, whenever she sees Nicky, because in the Dominican Republic, Nicky was drawing rainbows with Pauline, she goes ‘Rainbow’.

It’s beautiful the first time she said it, but to me I’m (thinking), “Why is she saying ‘rainbow’?”  I don’t know. The second question was about the lineup? I think I’m last because I’m kind of nice so they always… I think. I’m not sure. I’ll sing for you!