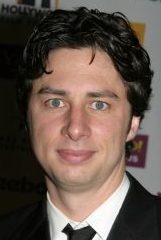 Zach Braff directs, stars, writes and produces Wish I Was Here, a partially crowd-funded film (46,520 backers on Kickstarter). This is Braff’s second film at the helm, following his indie hit Garden State ten years ago. Aidan Bloom (Braff) is a struggling actor. His wife, Sarah (Kate Hudson), supports the family with her public service job as Aidan pursues his dream of being an actor, which has not been going too well. When the family faces some financial struggles and a family emergency, their two children Grace (Joey King) and Tucker (Pierce Gagnon) drop out of their private school and start homeschooling with dad. Wish I Was Here 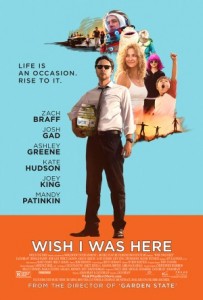 is a heartfelt family drama about pursuing your dreams and finding yourself in the process.

Braff talks to WhatsUpHollywood.com about daddy issues in Garden State and Wish I Was Here, and his adult experience regarding cosplay and furries gone wild.

Q: This film touches on father-son themes. Your last film, Garden State, did as well. Is there a reason you come back to this theme?

There’s a couple themes that I think overlap from my other film. I think that’s one of them. Father-son stories just get me. I’m a sucker for them. I have a complicated relationship with my father. I love him very much, and we’re now best friends, but when I was growing up it was often at times difficult. And, I couldn’t care less about sports, but when that father comes out of the cornfield in Field of Dreams I need a whole box of tissues… I wanted to write what moved me and what was true for me. That was the experiment of this whole exercise. If you’re not forced to compromise on what you’re writing, if you’re not forced to change anything, what would you write? And my brother and I wrote something that was really personal: what we felt about spirituality, what we felt about our fear about losing our dad, what we felt about going after our dreams when we’re getting older.

Q: Without spoiling the film, there is an adult interaction with cosplay or furries worth a lot of laughs in the film. What is your experience with cosplay/furries? 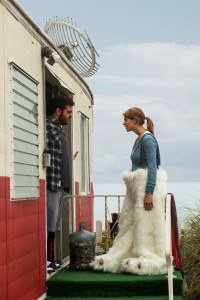 I thought cosplay was really interesting, people dressing as characters from movies. I went to Comic-Con and I just thought it was really cool that there were people who are shy and some of them were more reclusive, not all but some, and that they found a way to be fully self-expressed with these costumes. In becoming these characters, these heroic characters, they became the characters themselves, and I always thought that was really cool. I wanted to write about that. And then I thought it would be funny if an alien and a space man were having sex. So I put that in there too.

Wish I Was Here is out in theaters July 18th.