Jennifer Garner on Faith, Family, and Filming “Miracles from Heaven” 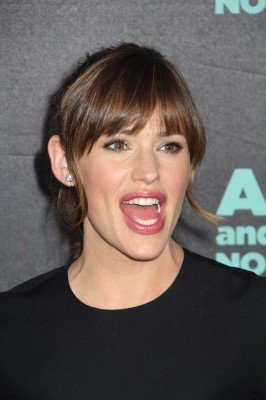 First, let’s get something out of the way – this is not just a story about religion, God, or Heaven, but an incredible story about the strength of a mother and the bond a mother shares with her daughter.  Jennifer Garner, a mother to three herself, stars as Christy-a mother to three daughters, one of which has an incurable disease that leaves her unable to digest food.

Check out our interview with Garner who shares what drew her to take on the role of a Christian mother in a film with a faith based message? 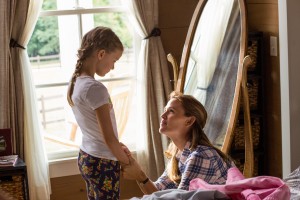 Q: You really have stepped in the role of the quintessential mom. Like as Timothy Green and Alexander and the Terrible Horrible, No Good, Very Bad Day then this film. What is it about these films that draws you in beyond just the Mom role?

The universality of family. And love. And just the humanity of the film. I like a movie if you can tell it has some humans at it’s center. And I’m thrilled. I was a mom a long time before I started playing mothers in films. I’m happy to have aged into one of these windows in my career where I am emotionally matching—not that I’m playing myself— but that I match my age on film in a weird way. Right now I’m playing this hideous mother, who’s actually the worst person in the entire world. 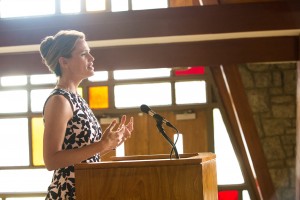 Q: This is obviously a family with very strong values and faith. Can you relate to that?

I grew up going to church every single Sunday. I was a vacation bible schoolgirl. I’ve taken— Ben (Affleck) and I took our three kids to my church in West Virginia to be baptized— each independently. But my kids felt like something that church was something we went to when we were at their grandparents house and not part of their lives in LA. And it’s funny because I think going to church, religion has crossed into a political realm. And it doesn’t feel normal in California like it is in other parts of the country. In West Virginia it’s where your social lives are. It holds a huge part of your education. It’s where your basketball team is. It’s much more a part of your daily life than it is in California where it’s easy to say, “I’m religious, or I’m spiritual.” But not really practice in any way. And I was one of those people for 15 years of living out here, and certainly have no judgement on anyway that anyone believes or practices, but this movie being part of a community of people on a film where faith was part of the conversation. Church was part of the conversation. It just reminded me of the fact that, that wasn’t part of our conversation at home as much as it could be. I finished the movie and I just gently mentioned something to my kids, and they said, “We’re ready to go to church. We go to church. We’re baptized. We got to church with grandma and granddad.” And I said, “Ooh. Gosh.” So, we went to the closest Methodist church because that’s how I was raised and we really have gone pretty much every Sunday. That was a gift to me from this film. 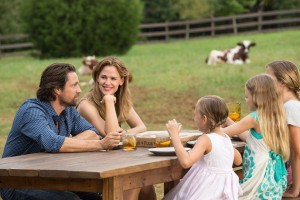 Q: You have two daughters and one son in real life and in the film you have three daughters. What are the differences between the dynamics of sisters versus brother and sisters? Also, what was it like working with child actresses, Kylie Rogers, Brighton Sharbino, and Hannah Alligood?

These are amazing kids. And they hung on Martin (Henderson, played dad) 24/7.

Q: Child actors are normally with their parents on set.

Or they’re in school. In this case they were with us all the time. I like to hang out with the kids between takes because you need to get to know them. But I do crafts and I read with them and I bring them books. I have my own things.

Q: You’ve said before that it’s not your oldest daughter, but your younger daughter who really seems to be keen on doing— 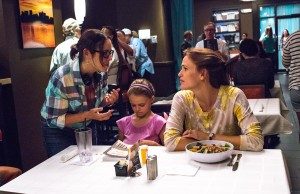 Q: Well, when you’re doing a movie like this with three kids—Don’t they give you a lot of pressure at home saying, “Come on mom, this is my chance.”

No. No. No. it’s not even in the conversation. At this point it would not occur to her. Or to any of them.

Q: One of my favorite scenes in this film was the pizza scene. Do you have any family members or close friends with a special diet and how do you deal with it?

I’m so lucky to have healthy kids. You know, if I’m with Victor Garber and he’s diabetic and not supposed to have sugar, I just dig right in. I just give him a smile.

Miracles from Heaven is playing in theatres nationwide now.