Salma Hayek says, “I’ve been pregnant for 4 1/2 years,” while producing the very beautiful and challenging film “Kahlil Gibran’s The Prophet” 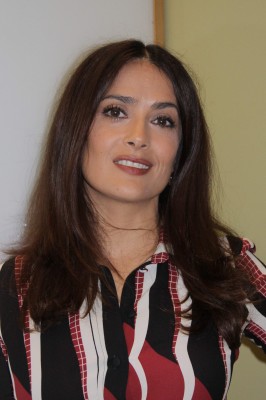 From Mexico with Lebanese descendant, Salma Hayek produced the animated film adaptation of the book by Lebanon-born poet and artist, Kahlil Gibran’s The Prophet. It is a very beautiful and yet challenging film. What was her first experience with the longtime bestselling book? Also what was her young daughter’s reaction to mommy’s work? And what kind of limitations does Salma have for her daughter? She answered these questions and more for me with good humor and energy, then agreed to a quick photo shoot even though she was very tired, then hugged me! (She is about my height, so it was a really easy hug for us!) 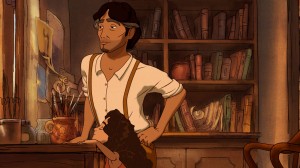 Q: Can you talk about the first time you read The Prophet?

The first time, it was a personal thing with my grandfather. I discovered the book on his bedside table and then he died when I was 6. I was haunted by the image on the cover. I found it again when I was like 18 or 19 and I read it. And to me, it was like, “Oh, my grandfather is talking to me. He is teaching me about who he was and about life.” It was so personal. Then I realized more than 120 million around the world also felt like someone was talking to them and they use it for when they get married and for different things. 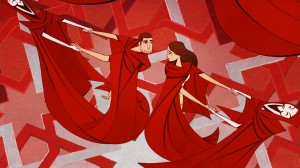 For me, at the time, it was that and I didn’t understand most of it. But there were things that stood out. I think it’s phenomenal – because he talks about the simple things in life that bring us all together. This is why I think it’s embraced by all religions and stuff. Just the simple things, to be grateful, to be excited about food, about love, about death. Why not be excited about death? Because there is something beyond (and) that we are more than just our bodies. I think that when people read it, there’s always a phrase, you’re not supposed to understand or like the whole point, that feels comforting and familiar, like you heard it before but you don’t know where. That’s not your brain talking to you. That is your instincts telling you (that) this is true. 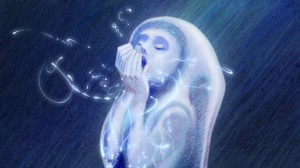 I think that throughout the years, I have been able to recognize different phrases. Even though I’ve watched the film 100 times, I’m not bored of it. It reminds me of some different conflicts in my life and I think this is part of the magic of the words. 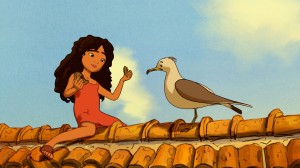 Q: Did you show your daughter (8 years old in September of 2015) and what was her reaction?

Yes, but my daughter was resentful (and) jealous of the film. For most of her life, mommy was not paying attention because she was working. You have to remember I was doing this from Europe and everybody was on American time so (it was) many, many nights of not sleeping, not taking her to school in the morning because I was working until 5. It was really difficult to make this movie. It was such a nightmare. It was the hardest thing I’ve ever done. 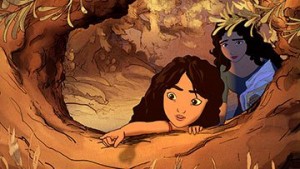 So she saw a little piece of the main story and said, “Nobody is going to watch that film. You know that? It looks old. We’re not used to this.” When she went to see the film, I remember on her way there, (she said), “Are you going to be angry if I don’t like it? Am I supposed to say I like it even if I don’t like it?” I said, “No, I want you to tell me the absolute truth.” She went to see it and she came out quiet. And then I said, “Did you like it? Tell me the truth.” She said, “Mommy, I’m so proud of you.” And then she went home and she wrote a poem. What the poem said was that we are spirits. We cannot be incarcerated, not even by our own bodies. Because we are free, we are spirits, and we’ll never die. Somehow for my daughter the film gave her some comfort in that really difficult concept. She wrote that. 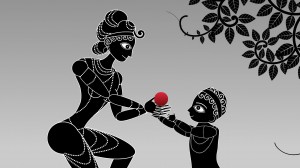 It’s funny because I keep telling my close circle, “I’ve been pregnant for 4 ½ years. This baby is about to come out and I just hope it’s a good boy or girl! [Laughs] I hope it’s a nice one.” I think that, yes, producing a child, it’s something that you are creating from scratch but the difference is that you don’t have any control. You don’t have any control of how it’s developing inside of you, and once it comes out, you don’t have any control. We think we do. But we don’t of how it will turn out. You have to do your best. But they are their own person and they come with their own agenda. You can’t force them into this or that and you shouldn’t. With a movie, it’s a collaboration of a team and you have some control. You have some say. I’m not saying my daughter is out of control. But it’s alive. It’s a human being. 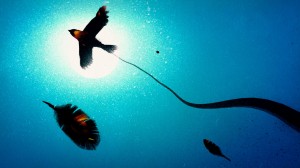 Q: Does your daughter have a curfew? Limitations for using a cell phone?

Oh, she has an iPod touch. Trust me, she wants that cell phone so badly. She goes, “I want it with all my heart, Mommy. Why can’t I have it?” I have to explain to her, “It’s good to want things with all your heart for a long time.” It’s true.

Check out our video interview clips with Salma Hayek below!

Interview 01
In the above interview, Hayek discusses the deeper inspiration behind her film and what she hopes will be the outcome with people who watch it. Plus, what are Hayek’s thoughts on the internet and the current state of humanity?

Interview 02
Next, Hayek chats about how Kahlil Gibran’s The Prophet “breaks all the rules of cinema” while using many different art forms, including art, music, filmmaking and poetry. Animators were allowed total freedom in what they created, and Hayek shares how that affected the overall feel of the film.