“Shaun the Sheep Movie” co-directors talk about their behind-the-scenes secret! 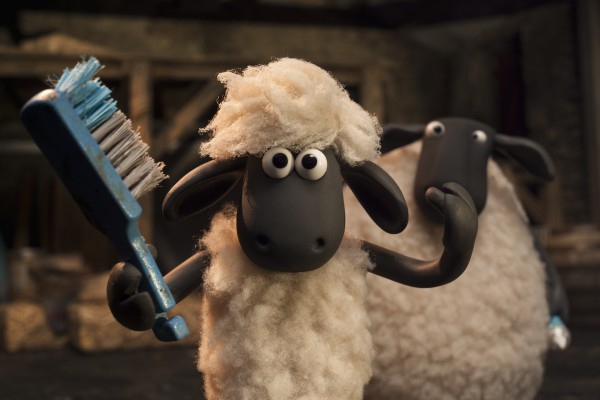 Another lovable Aardman character gets the silver screen adaptation! Shaun the Sheep gets his film debut with Shaun the Sheep Movie. This time, the mischievous sheep goes to the city to have an adventure with friends. Yes, there is almost no dialogue as usual with other Aardman projects but it is full of emotion! How did they express that with just puppets? Animals walk sometimes with two legs and others with four legs. What is the rule for that? Co-directors Mark Burton and Richard Starzak answered that question and more! 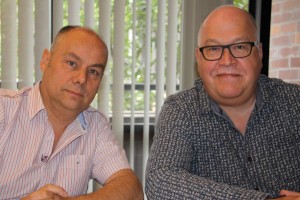 Q: This movie is without dialogue and everything needs to be expressed through body language, what were the challenges?

Mark Burton: I think the answer to that is a lot of it’s in the story telling. If you know what’s going on in the heads of your characters, you don’t need words. And we were worried: Is it going to sustain? Are people going to watch it for a while and then kids will be running around the cinema? I think what happens is you forget there’s no words because you know what characters are thinking. And a lot of that came from me and Richard worked very hard on telling a quite simple story and one that had enough emotional ideas and that kept you engaged. And actually, you should also thank our animators who did an amazing job of expressing and sometimes quite subtly little emotions that we wanted to express, and our voice artists. We did feel after a while that non-verbal communication was doing everything we needed.

Richard Starzak: It was the start of Pixar’s film WALL·E where their first third of the film was dialogue free. That was kind of an inspiration. I think the thing we took most when we went story boarding was the feel. What’s he thinking? What’s she thinking? And if we didn’t know, there was something wrong with the story. So we would always make absolutely sure that the audience would know what was happening in the characters’ heads. 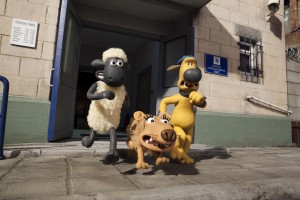 Q: The sheep and dogs usually walk or run on four legs, but sometimes in this movie they stand on two legs. How did you decide when the animals should be on two legs versus four?

Mark: There was a kind of internal logic to that. A lot of that merged from the series when Richard was working on the series, which I didn’t work on. But generally speaking if there’s humans around, the sheep don’t walk on two legs, they don’t do human things so much because that kind of breaks the rule. The humans don’t really know what’s going on, but the animals declare… a secret life of sheep. So actually what you’ll notice is that the animals could be quite human in their behavior. When there’s humans around, they’ll tend to be more four-legged and more normal and it’s something we do quite subtly. In fact, sometimes within a shot, we use different puppets, we have four-legged puppets and two-legged puppets. You wouldn’t be aware watching it, but sometimes within a shot you switched from a four-legged puppet to a two-legged puppet. 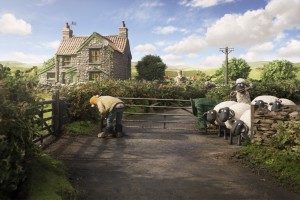 Richard: That was an American influence actually. Gary Larson, the cartoonist, there is a cartoon of his, which I loved, which is there are three pedals. The first pedal the cows are ballroom dancing, bouncing around like this on hind legs. One of the cows shouts “Car!” And everyone would get down on four legs and pretend to be cows as a car drives past [laughs].  And then they carry on dancing. That was quite a big influence on Shaun, the idea of what they are doing when no one is looking. 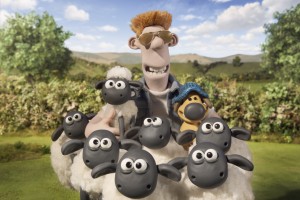 Q: How do you guys collaborate as two directors in having different backgrounds and working in the same studio and on one film? How is everything divided up and organized amongst the two of you with one movie?

Richard: In the writing process that was very collaborative. There’s lots of agreement and disagreement. But we had a producer with us that kind of helped in the mix if we both thought different ways. When it came to the actual production, it was relatively easy that we divided the film up between us in terms of scenes and sequences. We made the film so well by then, we would meet in the morning, discuss what we would do that day and then go to the studio and go over to my units and Mark would go to his. It would take several hours and it would get into the evening before we could discuss edit. It was very collaborative. Mark’s more experienced in screen writing than I am and I’m more experienced in directing than he is. So it was a good sort of yin and yang relationship.

Shaun the Sheep Movie opens in theaters on August 7th.