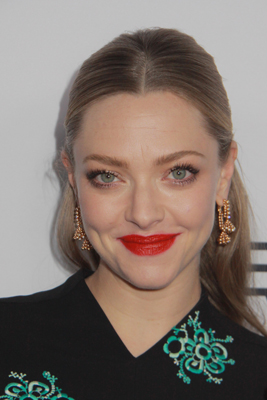 The first time I met Amanda Seyfried was back in 2005 for her film, Nine Lives, she was a budding young actress who previously found cult-classic success playing Karen Smith in the film  Mean Girls and was about to hit her breakout role in a series on HBO’s Big Love.

A lot has happened for her professionally since then and even more so-personally. When Amanda came into the press conference for her latest film, The Last Word, she was noticeably pregnant. If that wasn’t enough big news, on March 17th, Hollywood was buzzing from fiancé, Thomas Sadoski’s  appearance on The Late Late Show With James Corden the night before where he let it slip that he and Amanda eloped on March 12th.

Needless to say, Amanda has come along way since gracing the covers of those Sweet Valley High books.

In her latest film, The Last Word, Seyfried plays opposite the legendary Shirley MacLaine, as well as her new husband who donned her with impromptu kisses during the press conference-always a plus.

Q: In this film, Shirley’s character is vocal about the risks she has taken in life. Would you say you were a risk taker and if so, what  is the biggest risk(s) you have taken in your life?

For me, I used to not consider myself a risk taker at all. (I’m) a very fearful person. I wasted some time being fearful, then one day I had an artistic opportunity that scared the living daylights out of me. Instead of saying no, I said yes and the course of my entire life has gone on a different path and I will never be the same person I was before that. I’ve gotten more than I can even say out of that; that one risk that I took. I don’t look at things as risks anymore.

I look at them as opportunities that fail spectacularly. We’re too afraid to fail and that we’re not going to get anywhere and that’s another thing I love about this movie. [To Shirley] What about you? 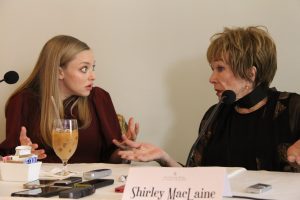 Shirley MacLaine asked Amanda about what that risk was.

It was a play. It was a play off Broadway. It was a two person play with that guy [points to Thomas Sadoski]. It was terrifying. It was terrifying because I’m terrified of audiences. I’m terrified of being alone and I hide on film sets. I’ve never truly had the challenge of acting naked like that. I just learned everything. I learned a lot. It definitely made a giant impact. 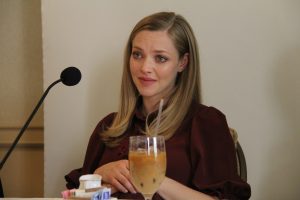 Q: Now that you are expecting, what did you take away from the film as a soon to be mother?

I want to make it very clear to my child that they are safe and loved. I don’t want to ever lie to them. There’s a huge responsibility to being a mother and I feel like this experience, especially with Shirley, it’s all about honesty in your life, in your acting, and in your relationships. There’s nothing more powerful and direct. There’s nothing to be confused about. 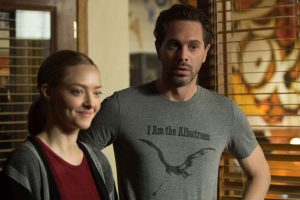 Whether you like it or not, the answer is just how you feel. Feelings aren’t facts, but certainly the way you feel about things is worthwhile. It was instilled in me even further that I just need to continue being honest and trusting myself and the journey of getting to know myself. I want to instill that so desperately into my child because you are all you have and you have this chance to really experience things to the fullest with all the self-knowledge you can ever have.

I ought to wrap this up. This message and this movie is really powerful and I’m taking it straight to this fetus. I hope can convey that to our… yeah. I think I will be able to. 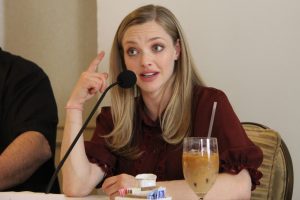 Q: If you could write your own life story what would the title be?

Q: The music in the movie is so amazing. What’s on your playlist?

There is a time and place for every genre, for me. I’d like to be listening to Bruce Springsteen when I’m giving birth. “Tougher Than the Rest.” He’s got a great collection, but yeah, I also like Patty Griffin (singer/songwriter). 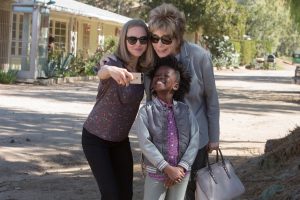 Q: What is your favorite quote from the movie, and why?

The Last Word is currently playing in  theaters nationwide. For theatre and ticket information, visit the films official Facebook page at, https://www.facebook.com/The-Last-Word-2017-New-Full-Movie-358711287832099/