“Power Rangers” Star, Becky G proves it’s what’s on the inside that matters – Because inside that suit is one ass kick’n female 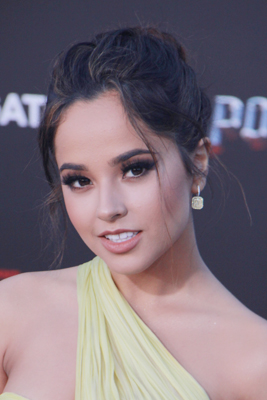 The new Power Rangers movie kicked open the doors this past weekend for the film’s premier, proving that it really is true what they say; all that matters is what’s on the inside, because America is loving that underneath one familiar super suit and one set of green heeled boots are two ass kicking girls played by Elizabeth Banks and Becky G!

We chatted with Yellow Ranger, Trini played by Becky G  who was first discovered by music producer, Dr. Luke on You Tube,  is now turning heads as the first LGBT super hero. 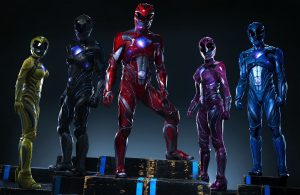 Q: The movie is very physical with some pretty good fight scenes, what kind of preparation you did?

It was interesting because I grew up in Inglewood, (California) so the concept of fighting was very natural. Learning to fight for (the) camera, stacking, safety zones, safety boxes, and announcing, “Okay I’m getting on the wires now and heading up.” All of that was very new for a lot of us. It was so much fun more than anything.

Q: Did you base your character off of current materiel or did you revisit old episodes of the Power Rangers TV show? 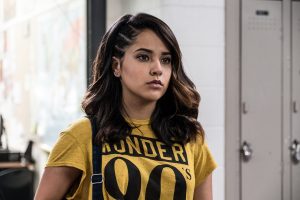 We made the conscious decision not to revisit those things, just because I wanted to take that impression that it first made on me, how it has inspired and stuck with me. Then (I wanted to) build off that. I think what intrigued me the most when I first had a conversation about the script and my character with Dean, was that although these names may sound familiar, you are meeting our characters for the first time. It’s taking place now in 2017 with really relevant and current issues, like how John (Gatins, writer) said, “a lot of kids can identify themselves with and somehow relate to our characters in some kind of way”. 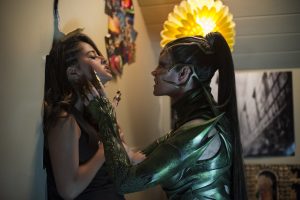 Q: What are your thoughts about Rita Repulsa (played Elizabeth Banks)?

This is the sexiest we’ve ever seen Repulsa I personally think. I think that’s dope, the aesthetic, everything goes together so well. I love it. Low key, can I get your number [laughs]? 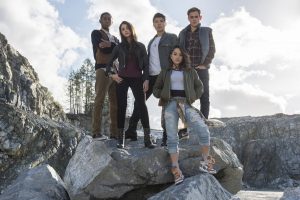 Q: What did you think about the bold steps the movie took towards diversity amongst the characters?

I personally as a new actress, I want to be very aware of what messages I’m taking on and what message this character is carrying. I feel like this movie is so diverse in so many ways. First off, the color of our skin and where we come from is very different in that it isn’t mentioned in the movie because it doesn’t matter. We are all equal and I think that’s amazing, but not only that we’re diverse as far as genders go. You have two female leads working together in the Power Rangers with 3 male leads and we say, “Together we are more. Without one we’re not the same.” 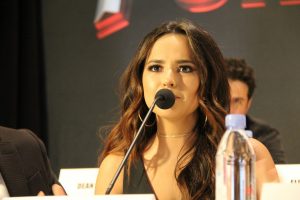 I think that’s awesome as well, being about that girl power and that it’s awesome to know there will be young women watching this and saying, “Hey, she looks like me,” or, “I could do that too.”

As far as Trini (Becky’s character) and who she is, I think that identity is very relevant and very current to our generation. We deal with self-identity issues, cyberbullying, and Billy being on the spectrum has a special place in my heart. My little brother Alex was diagnosed with Autism at a very young age and to know that he’s going to watch this movie and say, “That’s me?”

I think all we can ask for, is for people to share that positive message. We need that right now for sure. It’s truly an honor to be a part of all of this. 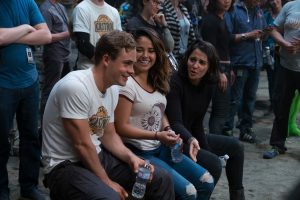 Q: How did you make the character your own?

As somebody who worked with your character [to Naomi Scott], building Trini had a lot to do with Naomi and how she was building Kimberly. We always talked about this sisterhood and how we would make that real. Also, how would we make it so we don’t seem pit against each other? Because, two women can be successful at one thing, it doesn’t have to be one better than the other, one prettier than the other, or one cooler than the other.

I love the contrast between our two characters and how they still at the end, come together. Especially as young women, that’s how we broke down that barrier because we have a total outsider, and then you have the queen bee. 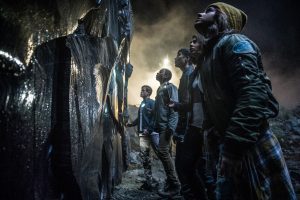 Q: The high school drama was very interesting in this film.

Do you have any memories of the best and worst days in school?

My school experience wasn’t the best. I would say the greatest day; there wasn’t a day that sticks out as (really cool). I guess the best way to explain it was like, I’m in a classroom filled with monkeys, and I’m a fish. The lesson of the day was how to climb a tree. I could see it, I knew how to climb it, I could tell the teacher how to do it, but I just couldn’t do it.

That was something that I talked a lot about with Dean, because I think other people may be expecting me to play a Kimberly, a girly girl, because I am a girly girl. On a soul level, as far as knowing what it’s like to feel alone, I connected to Trini with that, so I definitely took a lot of my childhood experiences from school. It channeled that whole thing. Yeah it was pretty s****y.

Power Rangers  is currently playing in theatres nationwide.  For theatre and ticket info, visit the film’s official website at: http://www.powerrangers.movie/