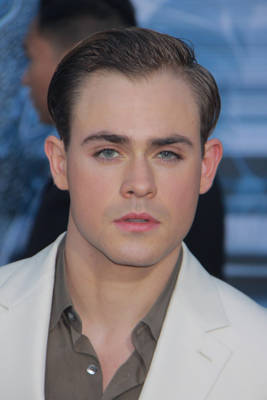 Australian actor, Decre Montgomery plays Red Ranger, Jason in the new Power Rangers movie; and while Red Ranger is what you would call the All American boy next door type, Montgomery shares he was not as popular growing up as his alter ego. Now-a-days however, he seems to have traded in his wallflower status for a ripped body and adoring fan club.

Q: The movie is very physical with a lot of fight choreography, what kind of conditioning did you have to go through to prepare for that?

I wanted to look as ripped as possible. I don’t come from a sports or a physically fit background. Spending 2 ½ months in Perth (Australia) training in the lead up to shooting was amazing. I learned so much about my body, my flexibility and my diet. The stamina to go through the shoot, but (learning) how to be safe on set and choreography was so important.

Becky G who sat next of Decre jumped in. 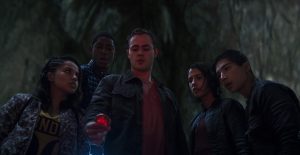 Becky G: I think we should take a moment of silence for all the teenage girls that fainted every time (Decre) posted a shirtless selfie. At one point we were going to print out pictures of the boy’s six packs and take pictures of them, and then post them.

Q: Did you mostly use the script to get in character or did you go back and watch the show?

I just wanted to say a big thank you to Dean (Israelite, director) and the studio, because there was a huge incentive from the creatives for us to add our own touch. I’m a newcomer, so what do I know? I think that’s pretty fortunate. I’m pretty lucky to have had that opportunity to put our own into the spice into the roles as opposed to going… “Thanks Dean.”

Q: The high school drama was very interesting in the film. Do you have any memories of the best and worst days in school?

For me school was very different. I didn’t really have many friends and I was pretty overweight and I just wasn’t… I guess when you first meet Jason (played by Decre) in the film you ask yourself, “Is this just the stereotypical jock?” I think that’s what’s so lovely about it and it doesn’t evolve that way.

I hope that I was able to mold my own experience to that and make him more multifaceted, multidimensional and interesting to watch so you fall in love with him. He’s seeking a relationship with the other people in the different social cliques, if you want to call it that, “clicks, cliques”.

Power Rangers  is currently playing in theatres nationwide.  For theatre and ticket info, visit the film’s official website at: http://www.powerrangers.movie/