“Ant-Man” star Paul Rudd wore the suit even on his days off?! 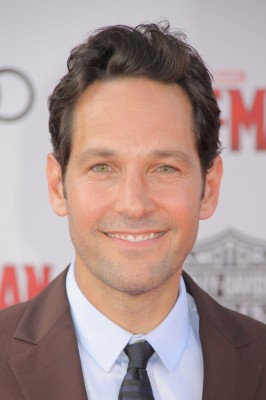 Indie dramedy actor Paul Rudd plays the title role in the Marvel superhero film Ant-Man and he talks about how this casting boosted his daddy status. He also has a confession about the Ant-Man suit and speaks about the father-daughter relationship. 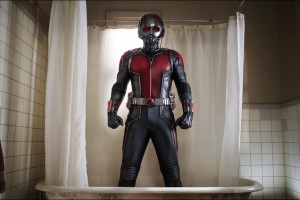 Q: What was the reaction of your 9-year-old whose dad became one of Marvel’s superheroes?

It’s the first thing I’ve ever done, ever, that he is like legitimately jazzed about. He can see it, his friends know about it. We were at Disneyland two days ago and they have kind of a sneak preview, the Ant-Man event that’s there. We went there and I was sitting next to him, and to see as a parent the look on my kid’s face when he’s watching this… I’ll never forget it. As soon as it ended he just looked at me. He’s like, “That’s awesome!” And every time a commercial is on, he’s like, “Dad, Dad, Dad!” And he’s so excited and I’ve never experienced that. It’s so cool to be able to share this with my own family, and especially my son. 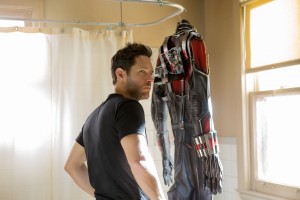 I loved the suit and I think it’s the coolest-looking suit of all of them, and I loved wearing it. It was not that uncomfortable.

[Co-star Michael Pena interjects laughing, “Wear it all the time…”]

Even on my days off [laughs]. It helped me feel the part. There’s something that happens when you get in that thing, that it’s inevitable. I would stand differently. I would feel different. I’d feel like Ant-Man in that thing. 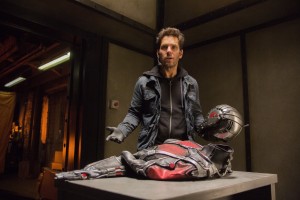 “Yeah, no, no, just five more minutes. Five more minutes.” And you know, they keep the sound stages a little bit cooler because it doesn’t really breathe that well. But it was cool. I would just sometimes catch myself… “Oh, gosh, this thing is amazing-looking.” And as far as getting skinnier to try and fit in it, I mean, I didn’t eat anything for about a year. I worked out all the time. I took that Chris Pratt (Guardians of the Galaxy) approach which is just basically eliminate anything fun for about a year, and that’s a good way to prepare to play a superhero. And again, it also helped me feel the part, which I kind of got into that aspect as well. 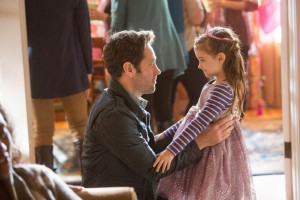 Q: The film has a father-daughter storyline. Did that give you another level to play with this character?

It was the thing that I hung the whole thing on. You know, you can have a movie that has amazing effects, and this certainly has that, and brilliant visuals, a lot of action, humor, whatever, but whenever you see something that you can connect to, that’s emotionally resonant, it stays with you in a very different way. I think that’s the key to any movie and that’s what I thought about throughout this whole film. This is what the movie is about. I also think there’s an interesting kind of father-son dynamic with Hank and Darren (Corey Stoll’s character). So this whole idea of parents and children runs throughout the movie and I think makes it really the thing that’s most relatable.